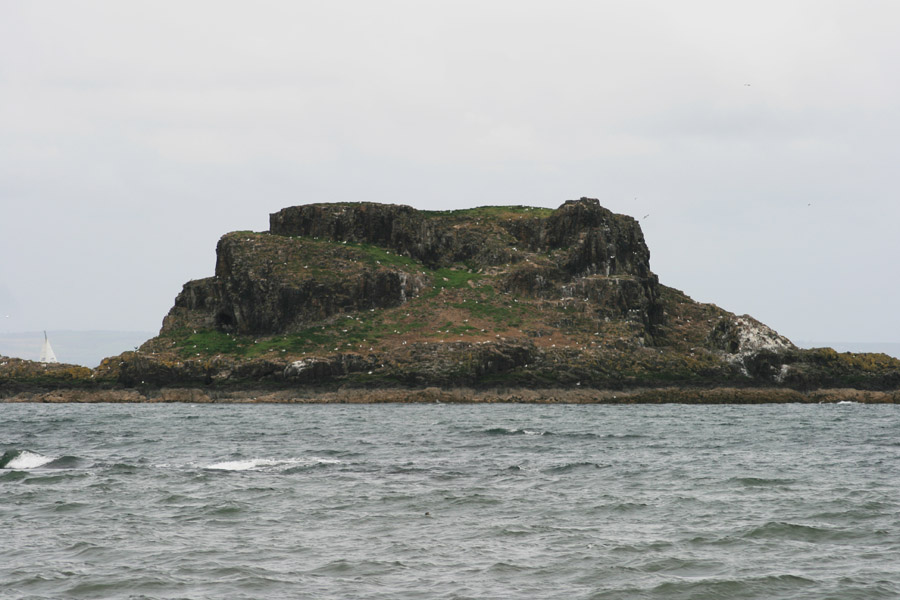 Castle Tarbet may have been a castle on the island of Fidra built by the de Vaux family in the 12th century however it may possibly have been confused with Eldbotle on the mainland.

Fidra was once known as the island of Eldbotle and was part of the barony of Dirleton which was granted to the Anglo-Norman knight John de Vaux by David I, possibly around 1150. The island having the same name as the lands on the mainland has led to some possible confusion.

De Vaux is though to have built a castle on a motte at Eldbotle, immediately to the south of Fidra, some time before his death in 1187, although there are also suggestions that it was a royal castle. David I issued two charters at Eldbotle, probably in the 1140s, and Eldbotle continued to be visited by Scottish kings until at least the 1160s with two more charters issued from there between 1153 and 1162 during the reign of Malcolm IV. Another early document from Eldbotle probably dates from late in the reign of William I (1165-1214).

It has been suggested that de Vaux also built a castle named Castle Tarbet on Fidra although the documentary evidence for this is lacking. The castle is said to have stood on a rocky eminence at the eastern end of South Dog, a narrow strip of land separated from the main island by a sandy isthmus which is submerged at high tide (hence the castle’s name, “tairbeart” being the Gaelic for “isthmus”). 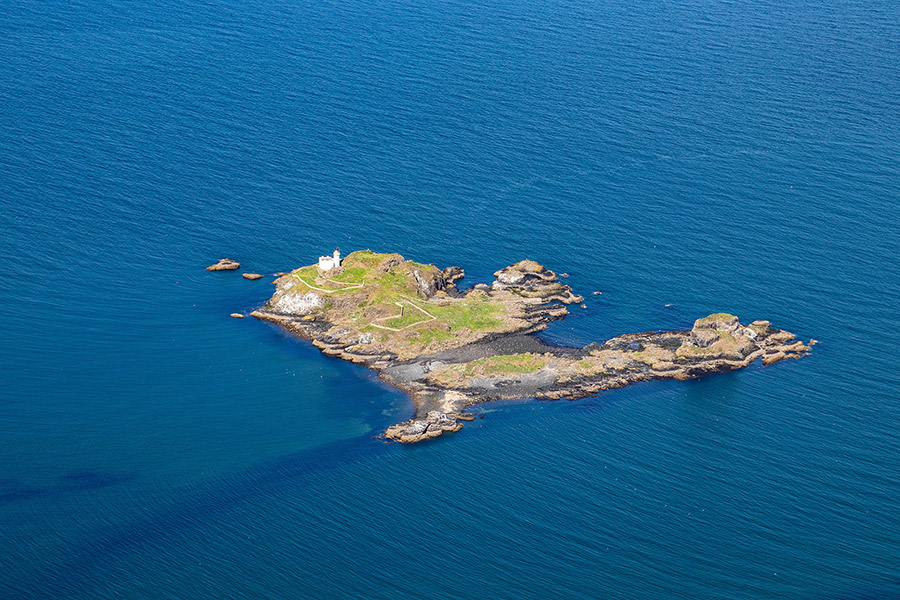 The summit of the flat-topped eminence measures around 40m long and varies in width from 8m across in the centre to 16m across at the east end. A rough track makes its way around the rock face before curving up onto the summit at its east side. The only built remains are a 6m long stretch of mortared wall lining the track as it climbs to the summit. 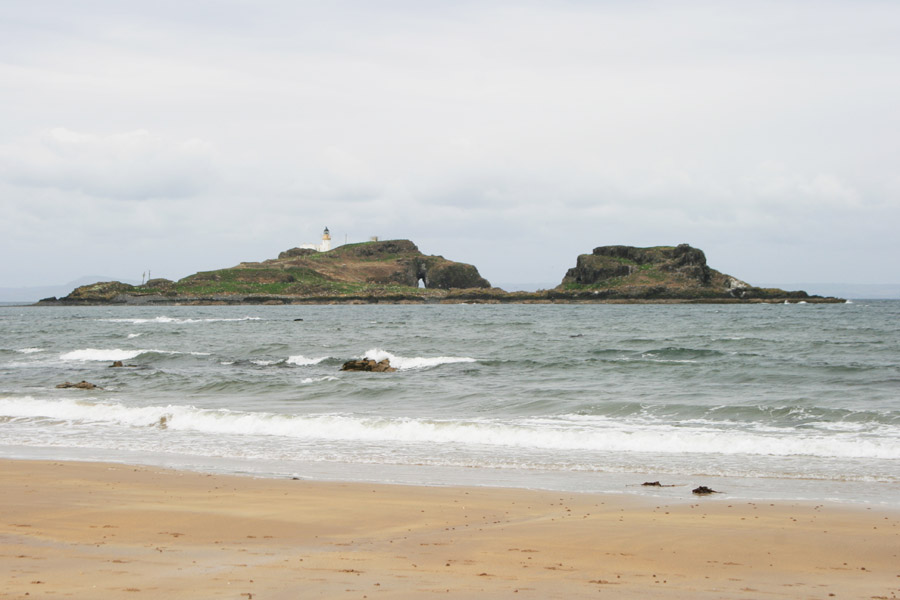 In 1170 John’s son, William de Vaux, granted the patronage of the church in Gullane to the Canons of Dryburgh Abbey in order for them to fund the construction of the church of St. Nicholas on the “insula de Elboitel”. Monks from Dryburgh were apparently already serving on Fidra when William granted them twenty and a half acres of land in the territory of Eldbotle around 1180. This grant was confirmed during the reign of Alexander II by William’s son, John, as well as the earlier grant of the island itself.

In 1220, Fidra was given to the monks of Dryburgh Abbey by John’s son William de Vaux, and it was William’s son – also named John de Vaux – who began building a replacement for Tarbet and Eldbotle at Dirleton further inland. 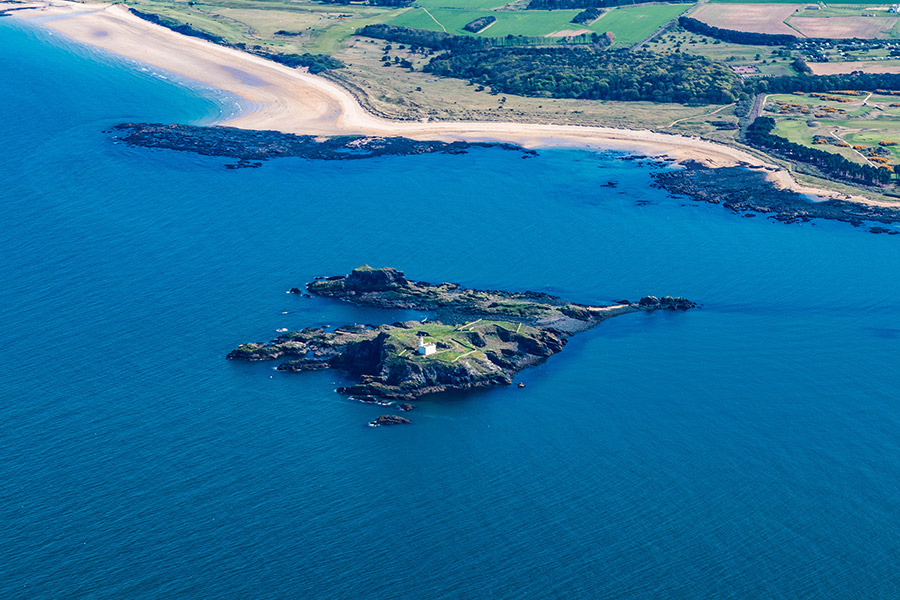 Around 1255 Alexander de Vaux, styled lord of Dirleton, allowed the monks of Dryburgh to provide one monk to serve at Stodfald and one to serve within Dryburgh Abbey itself instead of the two they were at one time required to provide for service at the church of St. Nicholas on the island of Eldbotle. This perhaps could be indicative of a decline in Fidra’s importance.

An Ivo of Eldbotle and a Hugh, son of Geoffrey of Eldbotle, are both recorded swearing fealty to Edward I of England in 1296. It may be that one of these refers to Eldbotle and the other to Castle Tarbet on what may have then been known as the island of Eldbotle.

Around 1350 Dirleton and Fidra passed into the hands of the Haliburton family when John Haliburton married the daughter of another William de Vaux who died with no sons. In 1420 Walter Haliburton of Dirleton kidnapped the custumars of Linlithgow and imprisoned them on Futhrai or Fidra in order to steal the payments they had collected. This has been interpreted as imprisonment in the castle on Fidra although the original Latin states “apud Futhrai et ibidem incarceravit” or “there imprisoned in Futhrai” with no specific mention of a castle.

In 1448 James Douglas, Master of Douglas and later 9th Earl of Douglas, planned to build a castle on Fidra in order to command the Firth of Forth however nothing came of his plans when the island was besieged. It’s possible that work was started but not completed and that the section of wall that still stands is a remnant of this work.

In 1509 Henry Congalton of Congalton was granted the castle in a royal charter by James IV (“Insula met terras de Fetheray unacum monte Castri earundem vocat Tarbet”) along with Craigleith which were erected into the free barony of Tarbet. This may suggest that Castle Tarbet was still a place of some note although it’s possible that the “monte Castri” or “castle mount” refers to the site of Douglas’s aborted castle rather than the site of an earlier castle.

Fidra is visible from the upper floors of Dirleton Castle and would have been visible from Eldbotle, all three being arranged in an almost straight line.

Where is Castle Tarbet?

Castle Tarbet is in the parish of Dirleton and the county of East Lothian.

Hew Scott
Edinburgh, 1950
Download
Proceedings of the Society of Antiquaries of Scotland (Volume 142)

Various
Edinburgh, 2012
Download
Proceedings of the Society of Antiquaries of Scotland (Volume 4)

bed and breakfastNorth Berwick
4.2km away