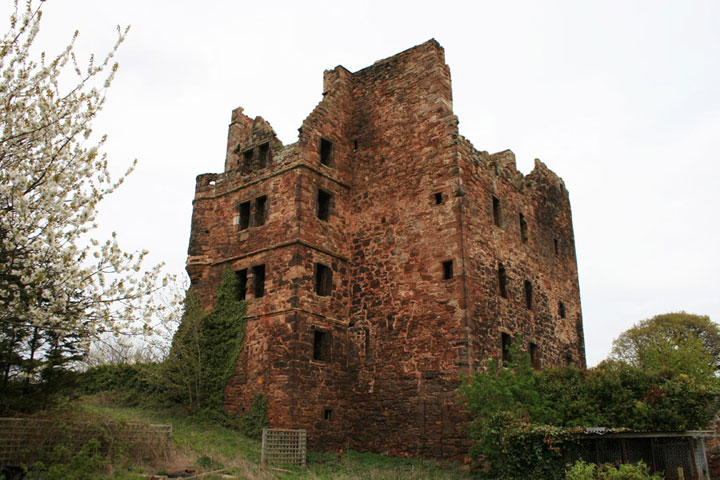 Redhouse Castle is a late 16th century tower which was extended in the 17th century and is now roofless and in ruins.

Prior to the 15th century the lands here belonged to the Douglas family, and some kind of religious institution was built nearby, giving rise to the name of Spittal or Spittel. In 1421 or 1422 Archibald Douglas, the 4th Earl of Douglas, seems to have granted these lands, along with his estates of Ballencrieff and Gosford, to his mistress Christian de Ramsay, who had borne him at least three sons.

It seems likely that there was a defensible building here at this time, and it may have been known as the Red House or Red Castle of Spittal. Although most histories of Redhouse Castle state that it was built in the very late 16th century by John Laing, the Keeper of the Signet, a row of 19th century cottages around 50m to the east of the castle are said to have been built on the site of old vaults, perhaps signifying that an earlier castle once occupied the site.

The existence of an castle seems to be backed up by its appearance on maps that pre-date the supposed late 17th century construction date, with it being marked as Spittell in Blaeu’s Atlas in 1654, Spittel on Jansson’s map of 1659, and finally as the seemingly well-established property of Ridehous on Adair’s map from 1682. 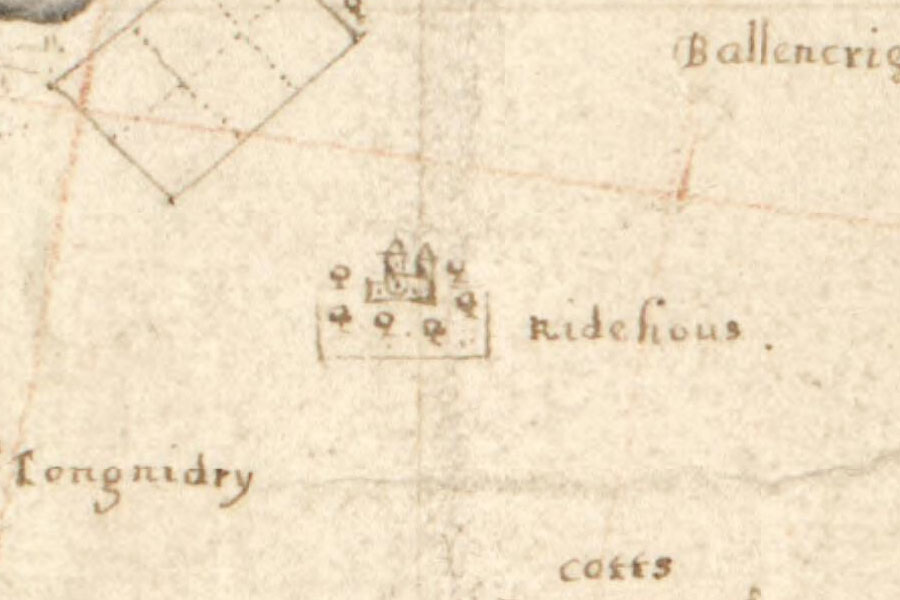 Some time after Douglas’ grant to Ramsay the Laing family seem to have come into possession of what was by then known as Redhouse, as an earlier John Laing, Bishop of Glasgow from 1474 and Lord Chancellor of Scotland from 1482 until his death in 1483, is described as being from the family of Laing of Redhouse in Aberlady parish.

Redhouse Castle today is an impressive and imposing ruin, rising to four storeys above a vaulted basement level. It is believed to have initially consisted of a tall rectangular tower, probably built in the. 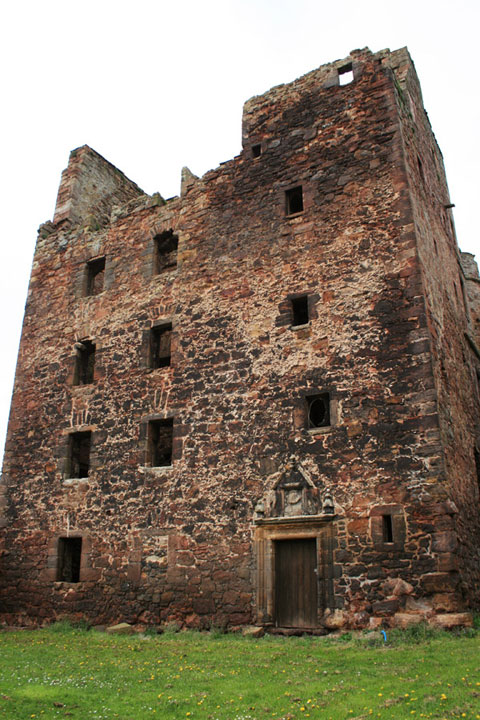 Originally it consisted of a five storey tower house, which now forms the south range of the castle. On the ground floor there is a large vaulted kitchen to the west, with the doorway to the east giving access to a spiral staircase.

Laing had his arms carved on the pediment over the door, along with the initials MIL and RD for himself (Master John Laing, John being spelt Ioannes in Latin) and for his wife Rebecca Dennistoun. On the door lintel itself is the motto “Nisi Dominus Frustra” (without God, all is in vain). 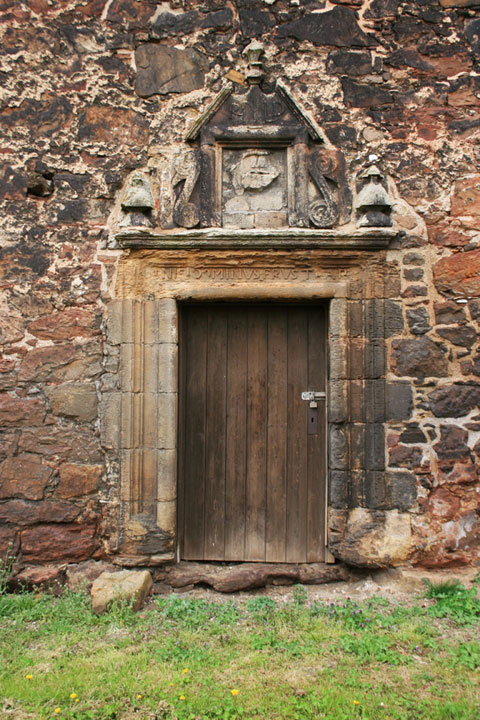 Above the kitchen on the first floor was the main hall, and the floors above that would have divided into various living accommodation. 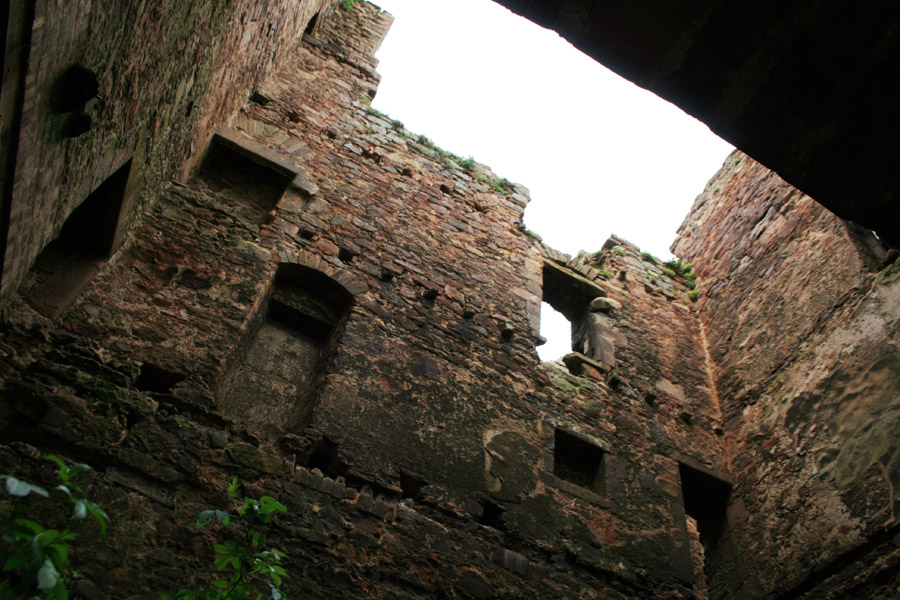 The tower house was at the north-west corner of a an enclosed courtyard, with an arched gateway in the centre of the south wall.

John Laing died in 1612 and his tomb can be seen in Greyfriars Kirkyard in Edinburgh (although the tomb mistakenly states his death to have been in 1614). The castle passed into the Hamilton family through the marriage of his daughter, Jean Laing, to Sir Andrew Hamilton.

Redhouse Castle is thought to have been extended to the north around this time with the addition of a further range of rooms. By 1640 the castle was owned by a Sir John Hamilton – possibly the brother of Sir Andrew. He is thought to have been responsible for adding a new square tower projecting from the north-west corner of the main castle, with a round turret staircase on the upper two floors. 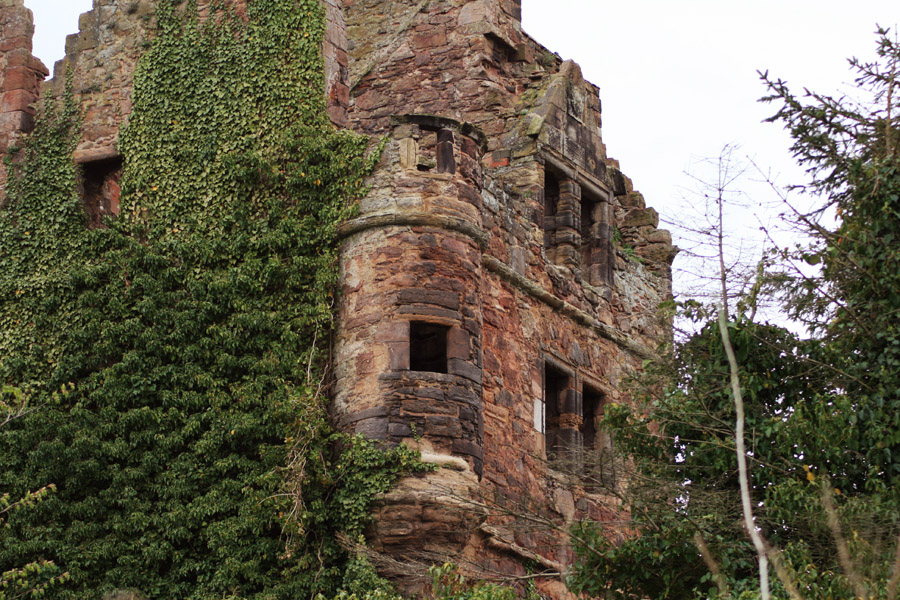 Hamilton is also thought to have added the doocot to the south-east corner of the courtyard wall. 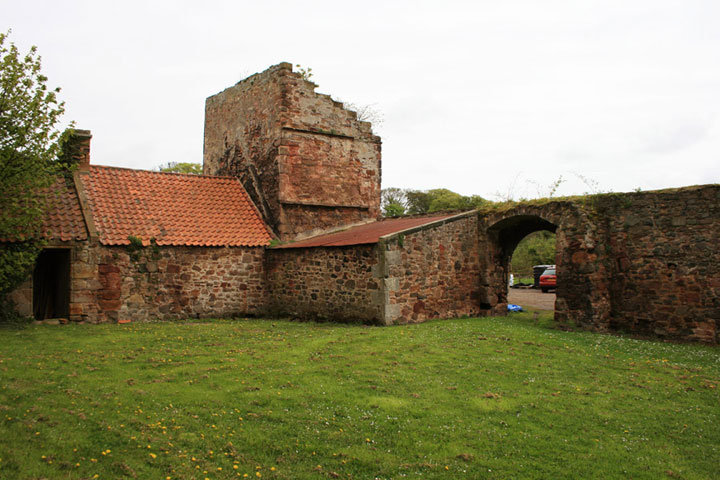 The Hamiltons forfeited Redhouse Castle and its estate in 1746, and it remained empty for several years. It was bought by George Murray, the 6th Lord Elibank, in 1755, but his main residence was a townhouse on the High Street of Edinburgh, so it stayed unoccupied.

After falling into disrepair, it was incorporated into the Earl of Wemyss’ Gosford Estate, and its former ornamental gardens are now occupied by a market garden. The castle itself still stands to its original height, and is more or less complete except for floors and a roof.

Where is Redhouse Castle?

Redhouse Castle is in the parish of Aberlady and the county of East Lothian.

bed and breakfastPort Seton
6.0km away