At the south end of Loch Glass is a small island called Eilean na Faoileag, on which a castle may once have stood.

Eilean na Faoileag is a crannog, but it is said that the Munro lairds of Foulis built either a summer-house on the island at some point in history, or some kind of defensive building for protecting wildfowl.

On some 16th century maps there is a tower marked, which appears to be situated in the middle of Loch Glass. Abraham Ortelius’ map “Scotiae Tabula”, published in 1573, names this castle “Reane Castel”.

However by the time of Gerhard Mercator’s “Scotia Regnum” of 1595 it has become “Keane Castle”. The Gaelic word “ceann” means “head”, and is often used to refer to the head of a loch, and it may be that this is where the name of the castle derived from. A property to the east of the island, on the shores of the loch, is marked on later maps as “Keanloch”, “Kenloch” and “Kinloch”.

It appears as “Kean Castle” on John Speed’s map of “The Kingdome of Scotland”, published in 1610.

The Kingdome of Scotland

The castle doesn’t appear in the Blaeu Atlas of 1654. However it is marked on Richard Blome’s “Mapp of the Kingdome of Scotland”, printed in 1673, and again on Vincenzo Coronelli’s 1696 map “Scotia”. But on maps from the 18th century onwards it doesn’t appear to be marked, suggesting that it had fallen out of use by this time.

So far I have only found a single non-map reference to a Keane Castle, so have added it as a “possible” castle pending further research.

Where is Keane Castle?

Keane Castle is in the parish of Kiltearn and the county of Ross and Cromarty. 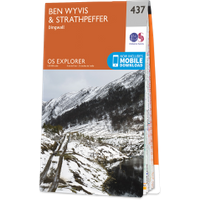