The Castle of Park dates back to the 13th century but has since been altered considerably during the 16th, 18th and 19th centuries.

The first castle on this site is said to have been built in 1292, possibly by Sir Waleran’s successor, although what form it took is unknown. However the earliest visible part of the building dates to the 16th century and either replaced or incorporated the earlier structure. It consists of a tower house built in 1536 on a Z-plan with a central rectangular block aligned approximately east to west and square towers extending from the north-west and south-east corners.

The main block and the two towers rise to a height of four storeys plus an attic and feature vaulted basements. The original entrance was located at ground level in the re-entrant angle between the south elevation of the main block and the south-east tower. A round-arched roll-moulded doorway leads into a small hall from the right of which a spiral staircase gives access to the upper floors.

It is likely that the castle was built by the Abernethy family as Alexander Abernethy, 4th Lord Saltoun of Abernethy, bought considerable amounts of land in Banffshire between 1514 and 1517 and the Castle of Park was said to be a Saltoun property by the early 16th century.

Following the bankruptcy of John Abernethy, 8th Lord Saltoun of Abernethy, in 1605 the caste was sold to Sir Adam Gordon, son of John Gordon of Cairnborrow and Edenglassie. The elder Gordon sold his lands of Benum in order to buy Saltoun estates for his two eldest sons, William receiving the lands of Rothiemay and Adam receiving those of Park. The Castle of Park would remain in the Gordon family for almost 400 years.

In 1717 the castle was extensively remodelled for Sir James Gordon, Sir Adam’s great grandson who had inherited the property in 1713. The south-east tower was extended to the north to match the projection of the north-west tower, creating an almost symmetrical façade.

On its east façade a carved stone panel was added carrying the date 1717 and the initial SIG and DHF for Sir James Gordon and his first wife Dame Helen Fraser. Helen was the daughter of William Fraser, 12th Lord Saltoun.

Further work was carried out for Sir James in 1723 with the addition of a three storey bow on the east elevation of the south-east tower. At ground floor level in this extension a new entrance was created around which is a roll-moulded surround with the names of Sir James and his second wife Margaret Elphinstone, daughter of John Elphinstone, 8th Lord Elphinstone, and the date 1723 inscribed on the lintel.

High above the door on the south elevation, at second floor level, is a carved stone armorial panel which apparently displays the arms of Sir James.

Sir James’ heir and son from his second marriage, Sir William Gordon, succeeded his father in 1727 and in June 1745 married Lady Janet Duff, daughter of William Duff of Rothiemay, later Lord Braco and 1st Earl of Fife. Later that year Sir William joined the Jacobite cause, and following the Battle of Culloden in 1746 he went into hiding. The castle may have been pillaged by the retreating Jacobites (this certainly happened to the nearby Cullen House) and later that year government troops camped on the estate while searching for the laird.

The castle next passed to Sir William’s half-brother, John Gordon, who as a Captain in the Marines had supported the Hanoverian side. Whether this transfer of ownership was instigated by Sir William to protect the family’s estates or by Parliament following a forfeiture is unclear.

Around 1750 classical additions were made to the north and south façades. At the rear, to the south, a three storey curved bow with conical roof was added. The ground floor section is harled with a single small window while the first and second floors are stone with three tall windows on each floor. At the front another three storey pedimented extension was added which featured a new entrance at first floor level reached by a grand horseshoe staircase, however this extension was demolished in the 1970s.

John Gordon died in 1781 without a son and so the Castle of Park passed to his nephew Ernest Gordon, the son of John’s brother James Gordon of Cobairdy. Ernest died unmarried in 1804 and the castle passed to Lachlan Duff, the son of Sir William’s sister Helen Gordon who had married John Duff of Culbin, of the Duffs of Drummuir. Lachlan took the surname Duff-Gordon.

Lachlan died in 1808 and was succeed by his son, Colonel Thomas Gordon, who in 1829 was responsible for the addition of a large, almost square, four storey Gothic tower to the west side of the north-west tower. The tower is topped off with a corbelled and crenellated parapet with bartisans at each corner featuring cruciform arrow slits.

The estate next passed to Thomas’ son, another Lachlan Gordon-Duff, who in 1858 inherited the larger estate of Drummuir following the death of his cousin Admiral Archibald Duff. Between 1876 and 1878 more modifications were made and a curved stair tower was added in the angle between the north-west tower and its Gothic neighbour to the west with a new main entrance at first floor level. The door is reached by a T-plan stair which was constructed from the 18th century horseshoe staircase.

Due to the addition of Drummuir to the family estates, by this time the Castle of Park, now known as Park House, had become a secondary property occupied by the heir rather than the laird. When Lachlan died in 1892 his son, Thomas Duff Gordon-Duff, moved from Park House to Drummuir.

Early in the 20th century gas lighting and central heating were installed for Thomas’ son, Captain Lachlan Gordon-Duff, however he was killed in action in France while serving with the Gordon Highlanders. Thomas died in 1923 and the estates of Park and Drummuir passed to Lachlan’s eldest son, Robin. Robin seems to have preferred the house at Drummuir and so Park was only used occasionally during the 1940s and 1950s.

In 1960 Robin’s brother, Colonel Lachlan Gordon-Duff, moved into Park House. Some time in the 1970s, as previously mentioned, the grand classical façade on the north side was removed, possibly in an attempt to restore some of the 16th century character of the building. In the late 1970s the property was sold to a Dutch dentist, Rudi Ovenveldt, then again in the late 1980s to a painter, James Duncan, who ran the castle as a hotel and restaurant.

Bill and Lois Breckon bought the castle in 2000 and it underwent significant renovation in the following years, subsequently being used for hosting residential painting and creative writing courses. In 2007 the castle changed hands again and is now a family home but also offers bed and breakfast accommodation and has a café called The Breakfast Room.

Alternative names for Castle of Park

Clans associated with Castle of Park

Surnames associated with Castle of Park

Where is Castle of Park?

Castle of Park is in the parish of Ordiquhill and the county of Banffshire.

OS Map for Castle of Park 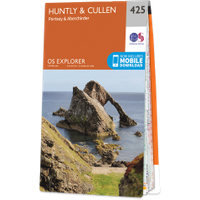 Directions to Castle of Park

Weather at Castle of Park

The Castles of Grampian and Angus

Mike Slater
Malvern, 2000
Buy from Amazon
The Castles of Scotland

Castles near Castle of Park

Ancient sites near Castle of Park

Pictish stones near Castle of Park

Pictish sites near Castle of Park

Accommodation near Castle of Park

bed and breakfast, caféCornhill
0.0km away

bed and breakfastHuntly
9.0km away

bed and breakfastKeith
16.9km away

bed and breakfast, caféCornhill
0.0km away