The ruins of Old Woodhouselee Castle, a possible 16th century tower house, stand high on a rocky promontory which juts out into the River North Esk.

The castle occupies a fine defensive position, standing atop a rocky outcrop which rises from the west side of a promontory created by the meandering River North Esk far below. The west side is defended by sheer precipitous cliffs which drop sharply to the river, while the land falls away steeply to the north, east and south.

The main block of the castle runs approximately ENE to WSW and consists of a vaulted basement measuring some 19 metres long by around 6 metres wide, standing to a maximum height of around 2.7 metres in places.

The basement was apparently divided into three separate vaults although it is difficult to identify this now due to the overgrown nature of the site. One of the cross walls diving the vaults was said in the 19th century to be around 1.5m thick and may have supported the chimney which was visible in 1790.

At the west end of the site a section of the vaulting is complete. 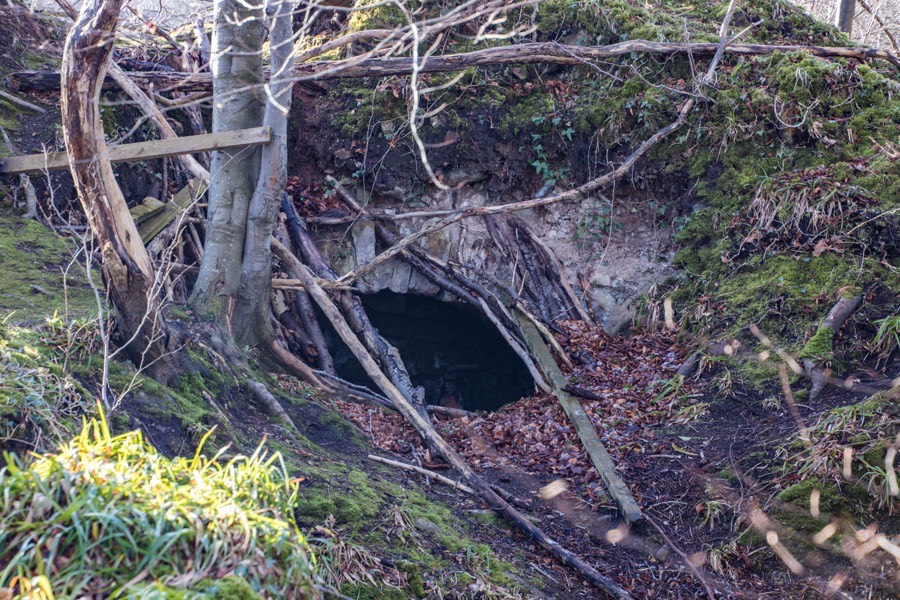 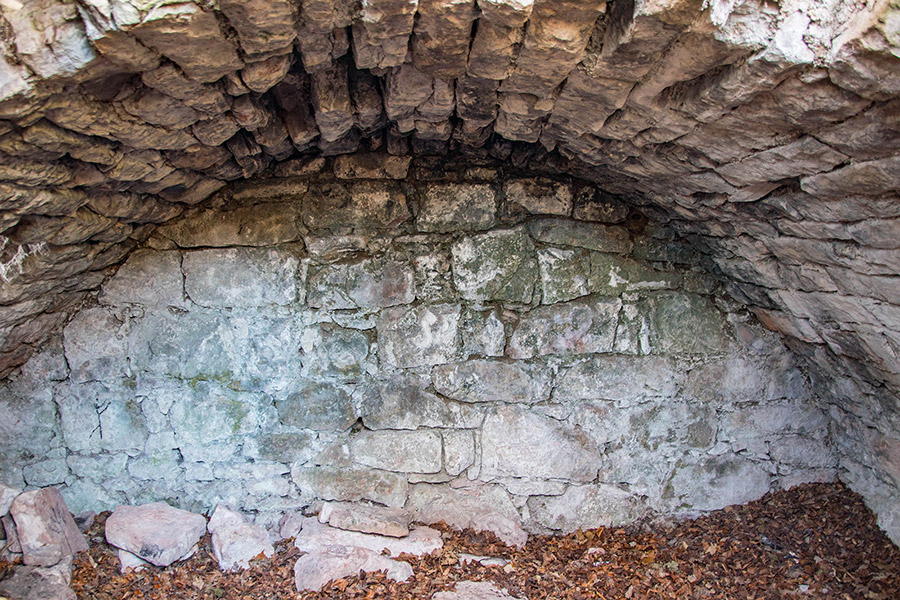 This vaulting seems to support a corner section of masonry which stands on the edge of the cliff. 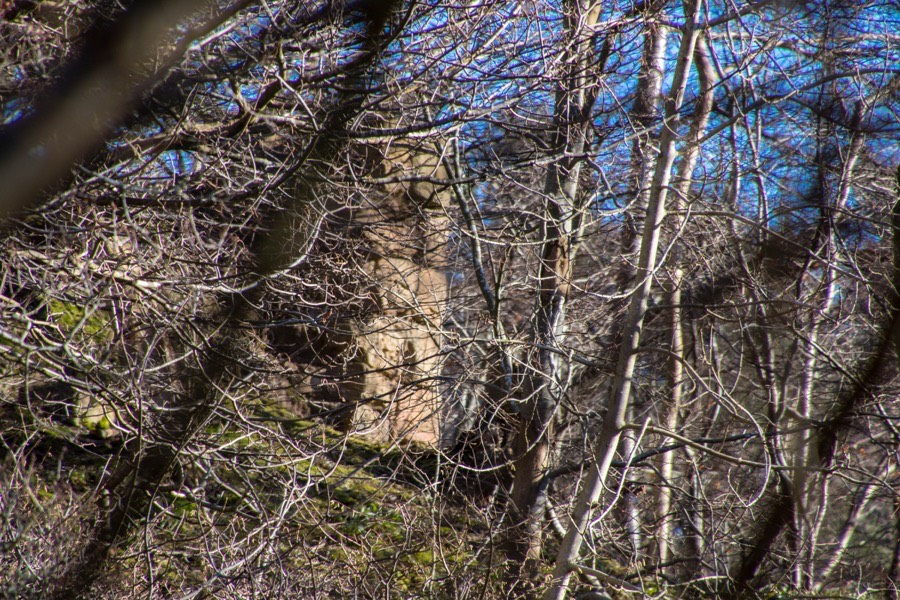 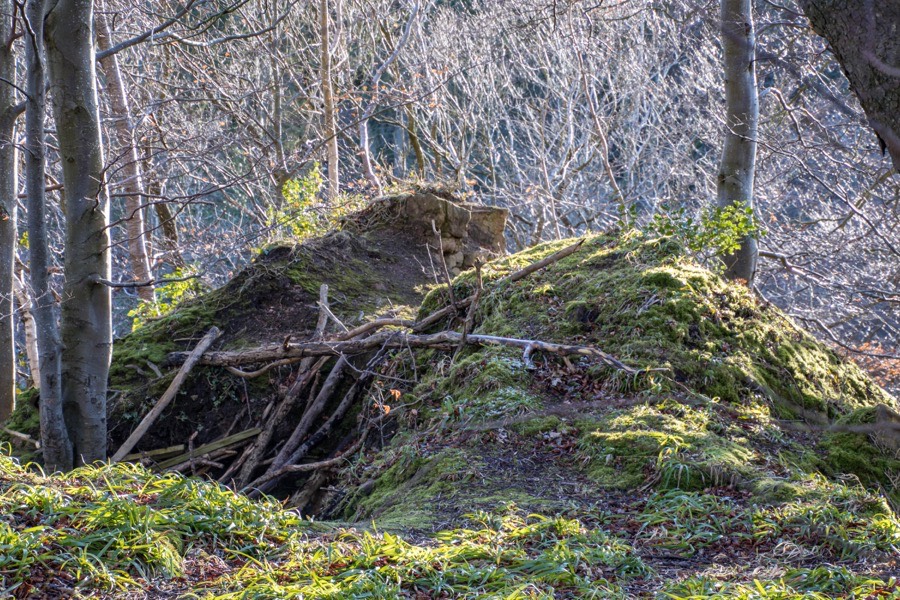 Around a third of the way long the south wall there is a slight opening which might suggest a window, although this is far from clear. There was apparently an arch over this opening still standing in the late 1980s / early 1990s.

Vaulting is also clearly visible at the east end of the castle. 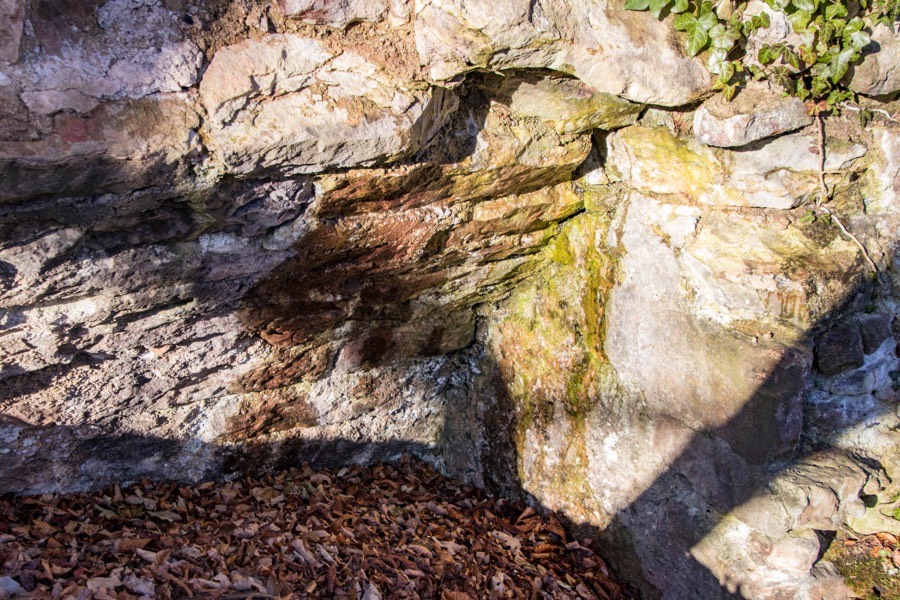 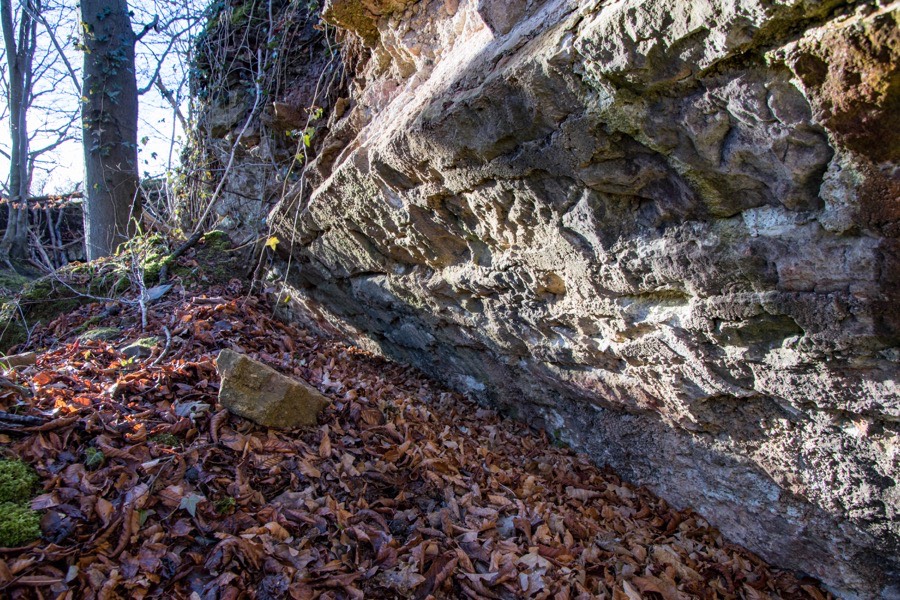 At the north-east end of the site, level with the top of the vaults, are the foundations of a building measuring around 5.0 metres by around 6.0 metres which project to the north, suggesting an L-plan for the castle. 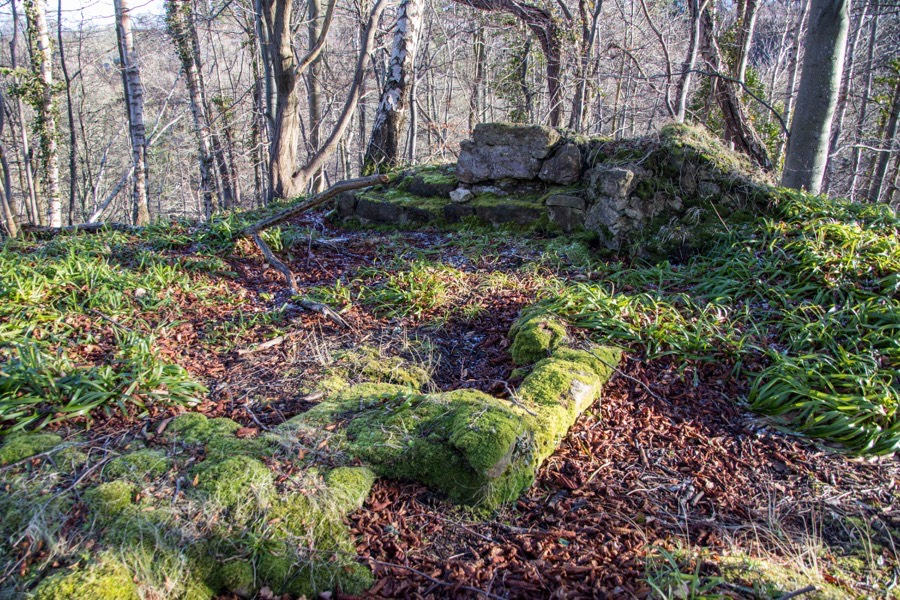 In 1966 this wing was excavated by the George Watson’s Archaeological Society, revealing walls around 0.90m thick with two doorways. Two 0.60m deep openings set int the interior of the walls were thought to be ovens, leading to the ground floor of the building being interpreted as a kitchen.

The castle is said to have been built by Sir Oliver Sinclair of Pitcairn (possibly Castle Lennox) and Whitekirk, brother of William Sinclair of Roslin, in the first half of the 16th century although some sources date it stylistically to the late 16th or early 17th century.

Sir Oliver and his wife, Katherine Bellenden, had two daughters, Isobel (or Isabella) and Alison, who were co-heiresses of Woodhouselee. The castle seemingly became the property of James Hamilton of Bothwellhaugh when he married Isobel, while his brother, David Hamilton of Monckton Mains (or Monktonmains), married Isobel’s sister, Alison.

James Hamilton would later become infamous as the assassin of James Stewart, 1st Earl of Moray, the Regent of Scotland and half-brother of Mary Queen of Scots, on the 23rd of January 1570 in what was the world’s first recorded assassination by firearm. Hamilton fled to France and the castle was burnt to the ground by Moray’s followers in an act of revenge.

The reason for the assassination was primarily political differences of which there were many between the two men. However a legend that Moray had evicted Hamilton’s wife and child, who subsequently froze to death, has become attached to this episode and several versions of it were repeated by various writers, including Sir Walter Scott, over the years.

Another version describes how Hamilton gave Woodhouselee to Bellenden following the Battle of Langside in exchange for his freedom. This was apparently first written down in John Spottiswoode’s “The History of the Church of Scotland”, but later retellings of the story had Bellenden taking possession in the middle of the night and evicting Hamilton’s wife. This latter version stated that the Lord Justice Clerk, Sir John Bellenden of Auchnole and Broughton, was a favourite of Moray’s and “violently occupied the house, and barbarously turned its mistress, during a bitterly cold night, and in a state of nakedness, into the woods, where she was found in the morning furiously mad.”

In fact Bellenden was the uncle of Hamilton’s wife, being the brother of her mother Katherine Bellenden, and her freezing to death seems highly unlikely given that she had relatives living nearby at Roslin.

Yet another version of the story suggests that Hamilton conveyed Woodhouselee to Bellenden with his wife’s consent in an attempt to avoid the forfeiture of the property. Whatever the truth, the Woodhouselee remained in the Bellenden family for several decades. Spottiswoode states that Bellenden refused to return the property to the Hamiltons.

In 1579 several members of the Hamilton family were tried for their part in Moray’s murder, however James Hamilton remained in France. Two years later James VI confirmed a charter by William Sinclair, son and heir of Edward Sinclair of Galwaldmoir, to Sir Lodovico Bellenden of Auchnoull (Sir Lewis Bellenden, the son of Sir John who had died in 1577), which included the lands of “Woodhouselee, with the tower and manor”.

Following the death of Sir Lewis in 1591 Woodhouselee was returned to the Hamiltons in 1592 when the King declared “that David Hamilton of Bothwellhaugh, Isobel Sinclair and Alison Sinclair, heretrices, portioners of the lands of Woodhouselee, ought and should be repossessed to the lands, houses, tacks, steadings and possessions whereof they were dispossessed through occasion of the late troubles”.

Who owned Woodhouselee after the sisters isn’t clear, however in 1657 Sir William Purves of Abbeyhill, later the Solicitor General for Scotland, obtained a charter of the lands of Woodhouselee. In 1665 these lands along with those of Fulford were erected into the barony of Woodhouselee, and in the same year Sir William used stone from Woodhouselee to repair and remodel Fulford Tower which was subsequently renamed Woodhouselee (the castle becoming known as Old Woodhouselee).

According to some of the aforementioned legends the ghost of Isobel Hamilton haunted Old Woodhouselee but her spirit was transferred to Woodhouselee along with the stones.

Woodhouselee seems to have passed next to Robert Deans, the son of Rosina and James, who sold part of the estate to Alexander Pitcairn, the husband of his sister Margaret Deans, in 1727. Pitcairn sold his part of Woodhouselee to Patrick Crichton in 1734, who sold them to William Tytler in 1748 or 1749.

I haven’t been able to ascertain the ownership of Woodhouselee after the Fraser-Tytler family, however the ruins of Old Woodhouselee Castle are now within the policies of Firth House, built in 1770 as a dower house for the Inglis family of Auchendinny House.

Where is Old Woodhouselee Castle?

Old Woodhouselee Castle is in the parish of Glencorse and the county of Midlothian.

David MacGibbon
Edinburgh, 1892
Buy from AmazonDownload
The Castles of Lothian and the Borders

John H. Ingram
London, 1897
Download
The History of the Church of Scotland (Volume 2)

John Spottiswoode
Edinburgh, 1847
Download
The history of the Fife Pitcairns

bed and breakfastLoanhead
3.8km away

bed and breakfastArniston
7.1km away