Boghall was one of the largest and most imposing castles in the south of Scotland, although only a few ruins of it now remain.

Boghall occupies a strategically-important site where the valleys of the Tweed and the Clyde meet, and had evidently been considered an important location dating back to Roman times. Exactly when the first castle was built at Boghall is unknown, but it was possibly in the 13th century. It is thought that the castle at Boghall was preceded by the motte and bailey castle, now known as Gillespie Moat in Biggar itself.

However there is also a possibility that there was a motte closer to Boghall. To the south of Boghall is a mound sometimes known as Boghall and sometimes as Hartree (being on the road to Hartree Tower). Its age and purpose is unknown, but its position suggests that it’s not a fort or settlement, and in volume 24 of the Proceedings of the Society of Antiquaries of Scotland, published in 1890, it is suggested that it may in fact be a motte.

The barony of Biggar, which included Boghall, is said in some sources to have passed by marriage to the Fleming family the thirteenth century, while other sources assert that it was in the possession of Baldwin in the 12th century.

The Flemings were loyal supporters of Robert the Bruce, and it is also said that Bruce gave the Flemings land in the area of Biggar in the 14th century, although this may just have been charters confirming land they already held. Interestingly Edward II of England is said to have stayed at Boghall in 1310.

Robert Fleming was made the 1st Lord Fleming in 1460, during a period in which the Flemings were ascendent in power and influence. During the Summer of 1473 Queen Margaret, wife of James III, is thought to have stayed the night at Boghall on her way to the shrine of St. Ninian in Whithorn.

Boghall Castle was probably rebuilt or extended in 1492 by Malcolm Fleming of Cumbernauld.

The area surrounding the castle was marshy ground, and considered impassable, offering natural defences. In addition to this the castle was surrounded by a substantial courtyard wall, measuring around 0.9m thick and rising to a height of around 9.0m, topped off with a parapet. It measured around 58.5m approximately east to west by around 62.5m north to south. The wall was defended at three of the corners by round towers – at the north-east, north-west and south-east corners.

One source states that the marsh was considered so impassable that the castle’s courtyard was left open on the south side, although this seems perhaps unlikely.

Each of the towers, which are thought to be 15th century in date, measured around 5.2m in diameter, and consisted of two storeys. Within these towers were chambers that were square on three sides, but trapezoid on the outer, curved side, measuring approximately 2.4m by 2.4m. Both the basement and first floors were vaulted, the latter supporting a stone roof. Moulded corbelled courses of stone at the top of the towers originally carried a parapet.

Gun loops pointed along the courtyard walls from these towers, at basement and first floor levels. The tower at the south-east corner of the courtyard had a dungeon in its basement, above which was the “girnel” where grain paid by tenants was stored.

Around the outside of the wall was a wide and deep moat filled with water, with the land between the moat and the wall planted with fir and ash tress, some of which are said to have survived into the early 19th century. The castle was approached by a road from close to Mains of Boghall farm, crossing the moat by a stone bridge which led to a substantial gatehouse on the north side.

The gatehouse, also thought to have been built in the 15th century, was a substantial structure, consisting of main arched entrance flanked by a pair of guardhouses. Running around the top of this tall building was a corbelled out crenelated parapet, with bartizans at each corner.

An L-plan tower house, built in the 15th century and probably contemporary with the courtyard walls, gatehouse and round towers, once existed in the west part of the courtyard, although nothing of it now remains.

Mary Queen of Scots stayed at Boghall in 1565, as the Flemings were distant cousins. One of the famous four Marys was Lady Mary Fleming, granddaughter of James IV and daughter of Lady Janet Stewart, whose family home was Boghall.

John Fleming, the 5th Lord Fleming, was a strong supporter of Mary Queen of Scots, fortifying Dumbarton Castle on her behalf in 1570 against the Regent, Matthew Stewart, the 4th Earl of Lennox. While Lord Fleming was occupied in Dumbarton, Regent Lennox’s supporters laid siege to the Fleming properties of Boghall Castle and Cumbernauld Castle, taking Boghall. 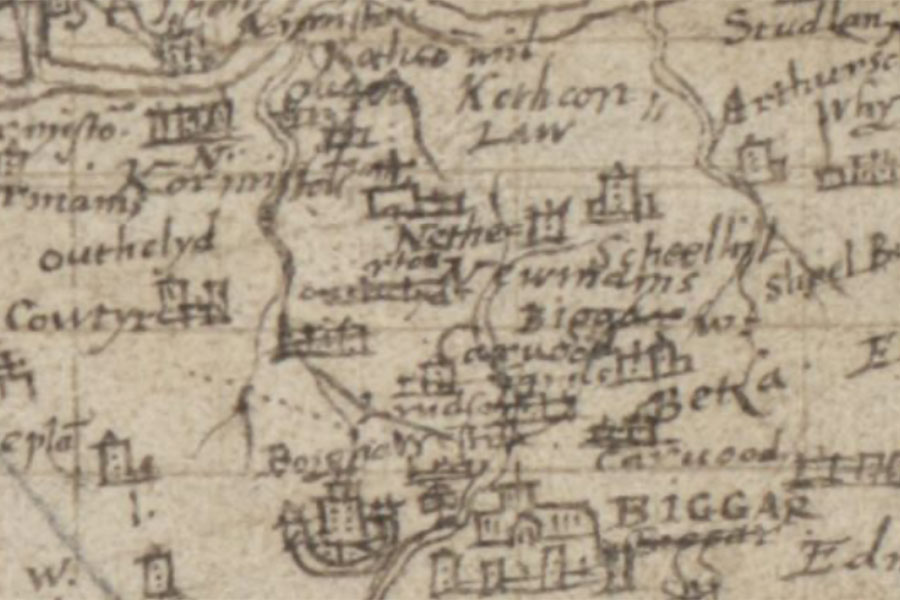 The 5th Lord Fleming’s son, also John, became the 6th Lord Fleming, and in 1606 was created the 1st Earl of Wigton (second creation) by James VI. In 1650 Boghall was besieged by Cromwell’s troops, who took the castle and held it for some time. Cromwell himself may have stayed at Boghall while chasing the Royalist troops northwards.

The old L-plan tower house is thought to have been demolished in 1659, and a new mansion house was built within the south-east angle of the courtyard in 1670, presumably by William Fleming, the 5th Earl of Wigton.

Constructed on a T-plan, it had a main rectangular block with a projecting square stair tower. Installed on the tower is a carved panel bearing the arms of the Earl of Wigton and just under the eaves is another stone with the date 1670.

The carved panel may be from a later period, as they are said to be the arms of the Earl of Wigton quartered with those of Primrose. Sir Archibald Foulis Primrose, 4th of Dunipace, married Margaret Fleming, the daughter and heiress of John Fleming, the 6th Earl of Wigton, in 1724.

Margaret Fleming’s mother was the 6th Earl of Wigton’s first wife, Margaret Lindsay. He subsequently married for a second time, this time to Lady Mary Keith, and they had a daughter, Clementina Fleming. Clementina married Charles Elphinstone, the 10th Lord Elphinstone, in 1735.

The 6th Earl of Wigton left strict guidelines regarding the family’s estates. If he, or his brother Charles, had no male heir then the estates were to pass through the female line. However the heir was compelled to assume the title, name and arms of Baron Fleming, and was not allowed to have any other title.

With the failure of Charles Fleming, the 7th Earl of Wigton, to produce an heir before his death in 1747, Boghall passed through Clementina and into the Elphinstone family. Since her first son, John, had assumed the title and lands of the 12th Lord Elphinstone, Boghall passed, along with Cumbernauld, to her second son, Charles, who took the name Charles Elphinstone Fleming.

It seems that Boghall wasn’t inhabited by Elphinstone Fleming, who seemed to prefer his other property of Cumbernauld,and by the end of the 18th century the castle was derelict. When it was visited by John Clerk of Eldin some time between 1773 and 1779 it was almost entire, and he produced the sketch below.

Biggar and the House of Fleming
William Hunter, 1867

In the late 18th century John, the 12th Lord Elphinstone, bought the house of Bellfield (later renamed Biggar Park) and in 1798 enlarged it considerably. He pulled down a section of Boghall and used the stone to build a kennel for his foxhounds.

By 1815 the majority of Boghall had been dismantled, although some walls were still standing. In 1821 Admiral Charles Elphinstone-Fleming, the son of John, the 12th Lord Elphinstone, repaired the projecting stair tower of the 17th century house.

The wider Biggar estate was broken up in 1826, although the Elphinstone Flemings retained the farm of Boghall Mains which included the ruins of Boghall Castle. Two or three years later however Boghall Mains was sold at auction to George Gillespie, who had previously bought Bellfield from the Elphinstones. Under his ownership the ruins were further robbed of stone for dykes on the farm, leaving only the stair tower and parts of two of the courtyard wall’s corner towers.

Biggar and the House of Fleming
William Hunter, 1867

In 1870 one of the corner towers collapsed, which prompted calls to preserve the remaining ruins. The stair tower stood intact but badly cracked in the 1890s, and collapsed soon after. Gilbert Rae, editor of The Scottish Field, was instrumental in preventing the complete demolition of Boghall in 1912, and what was left was consolidated.

There is a model of Boghall Castle in the Moat Park Heritage Centre in Biggar.

Where is Boghall Castle?

Boghall Castle is in the parish of Biggar and the county of Lanarkshire.

Biggar and the House of Fleming

William Fraser
Edinburgh, 1897
Buy from AmazonDownload
The lands and lairds of Dunipace

bed and breakfastWest Linton
13.8km away