Montrose Castle was a royal castle which may have been established by David I in the 12th century. It was certainly in existence by 1178 during the reign of William the Lion however nothing of it now remains and its exact location is disputed.

William issued charters from the castle at Montrose including one granting land to a man called Crane “for the service of being a porter in the royal castle of Montrose”. Some sources state that Edward I of England accepted John Balliol’s surrender of Scotland at the castle in 1296 although others assert that this occurred at Brechin. In 1297 the castle was destroyed by William Wallace but may have been rebuilt.

In 1488 David Lindsay, 5th Earl of Crawford, was created 1st Duke of Montrose and was granted the ruinous castle in the same year. Following the death of Lindsay in 1495 the property reverted to the Crown but was later granted to the Graham family who built a tower house there. James Graham, later 1st Marquis of Montrose, is thought to have been born here in 1612.

Today the building, which has the address 3 and 4 Castle Place and is now used as a job centre, features a three bay castellated façade built in 1815 but incorporating earlier fabric and consists of a raised basement plus further storey. Attached to the rear is a later three storey building. During construction work in 1950 workmen discovered old foundations which appeared to continue under 5 and Castle Place next door to the south-west.

A mound at Maryton has also been put forward as a potential location for the castle although it is now thought that it may be a burial mound so seems unlikely.

Another suggested location for the castle was Fort Hill or Forthill (located at NO 7102 5740) however this is more likely to have been a turf fort built by French soldiers in the 1540s to defend the town against the English. An archaeological investigation in 1996 offered little evidence for either a castle site or for the fort.

Where is Montrose Castle?

Montrose Castle is in the parish of Montrose and the county of Angus. 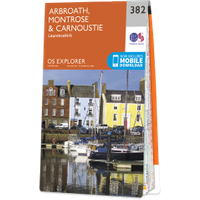 Robert Liddiard
Woodbridge, 2002
Buy from Amazon
The Castles of Scotland

bed and breakfastFerryden
0.4km away

bed and breakfastBrechin
12.2km away