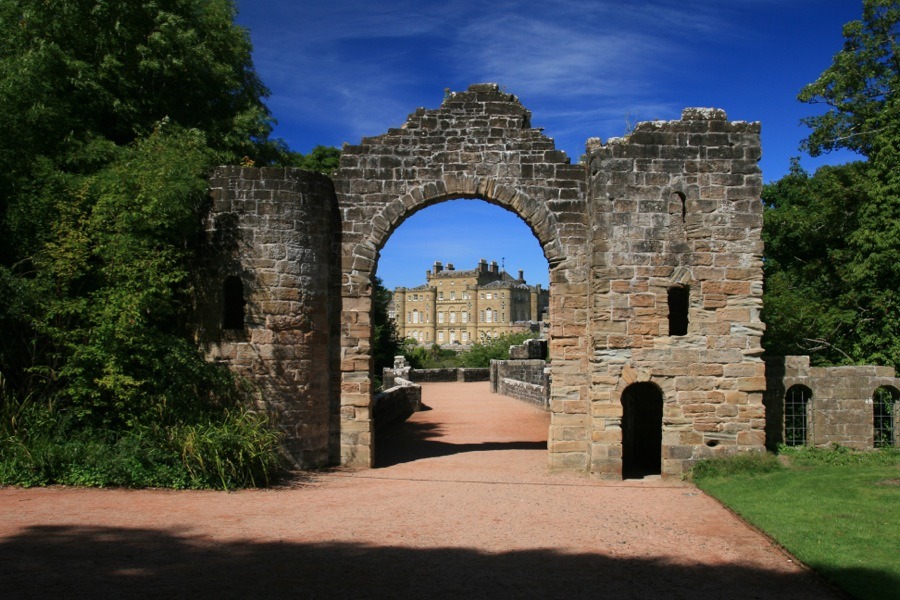 We were down in Ayrshire this weekend for one my cousins’ wedding yesterday, and today we had a family trip down the coast to Culzean Castle.

Culzean Castle was converted from a medieval castle into a magnificent mansion by Robert Adam for the Earl of Cassillis, and is the focal point of Culzean Country Park, a 242 hectare estate consisting of landscaped gardens and woodland perched above a rugged coastline. The castle is approached via an arched gateway, built as a romantic ruin by Adam.

Once through the arch a causeway leads you towards the castle, which stands above terraces and ornamental gardens.

At the other end of the causeway is a second arched entrance, surmounted by an elaborately-carved Kennedy family crest.

Through this second archway is a courtyard with on the west side of which is the castle‘s main entrance, added in the 19th century.

Unfortunately photography isn’t allowed within Culzean Castle itself, so you’ll have to use your imagination (or Google it!). Suffice to say, the lavish interiors are something special in keeping with the exterior.

The castle is perched right on the clifftop, with a considerable drop over the battlements to the sea.

On the rocks below we spotted a cormorant sunning itself.

There are great views from the battlements across to Arran and north along the rugged Ayrshire coast. 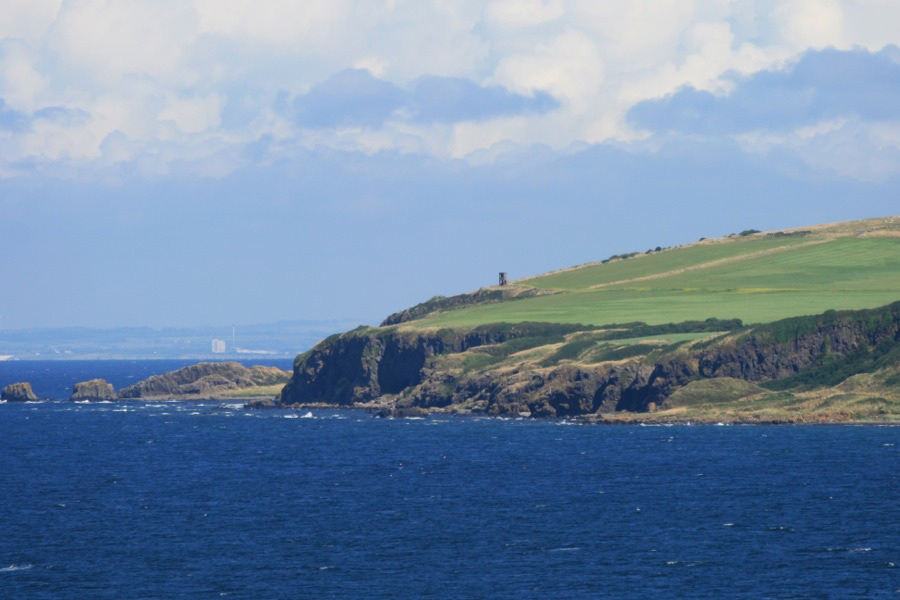 The south façade of the castle features four tall round towers.

To the east of the castle‘s entrance, across a courtyard, are the rather grand stables, also built by Adam.

Since the north façade faces out to sea and the east and west sides have later additions, it’s only the south façade of Adam’s building that can really be seen in its full glory.

Beyond the main block to the west is a three storey wing, added in the 19th century on the site of Adam’s brewhouse.

We retraced our steps, passing under the Kennedy family crest atop the archway and crossing the causeway once more.

To the east of the stables is the Home Farm complex, also built by Adam. Consisting of four low ranges of buildings arranged around a square courtyard, there is access at each corner via large arches.

One of the buildings has been converted into a café which was where we stopped for lunch, sitting outside in the glorious summer sunshine.

After lunch we made our way through the country park to the old walled garden, another part of Adam’s extensive redevelopment of Culzean.

Running down the middle of the walled garden are glasshouses, full of all kinds of different plants and also some vines.

The gardens were teeming with butterflies and bees, taking advantage of the great weather to go about their business from plant to plant and flower to flower.

Regular readers of this blog will know that my knowledge of flora is somewhat lacking, so I’ll let the photos speak for themselves.

We wandered back through the country park to the car park, next to which is a deer park. 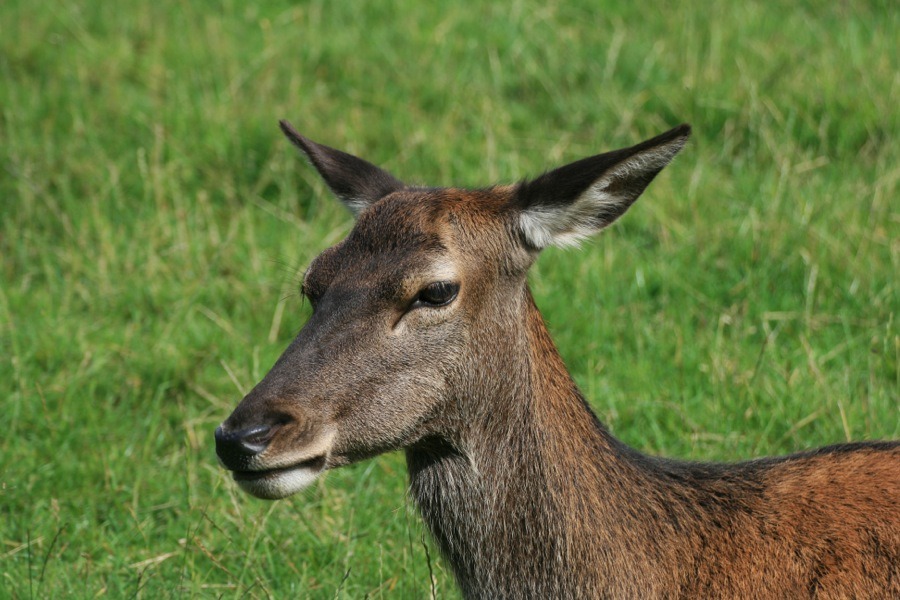 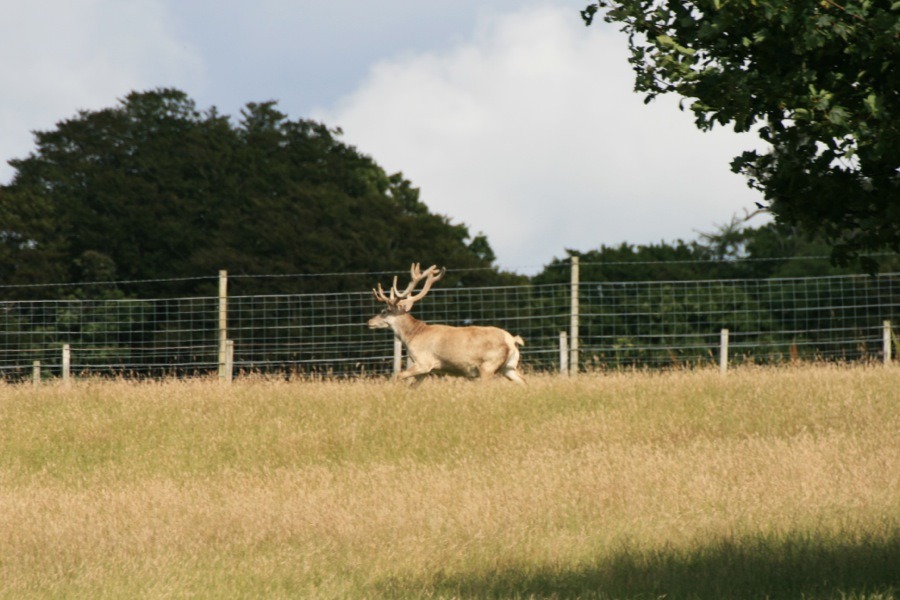 From here we went our separate ways, and we headed north on the A719 to Croy Brae, better known as the Electric Brae. This is a section of road which due to an optical illusion appears to be running uphill when it is actually running downhill.

When we rounded the corner at the beginning of the brae we were confronted with the chaotic scene of multiple stationary vehicles in the middle of the road, their occupants attempting to watch their cars roll uphill. With the layby full and cars all over the place there was no safe spot to stop and observe the chaos, or indeed to change the lens on my camera to record it, so we made do with a distance shot of the inscribed stone and continued north.

Slightly further up the coast we found a place to stop and took a photo of the Ailsa Craig rising majestically from the horizon of the shimmering sea.

It wasn’t long before we stopped again, at the tiny village of Dunure, the location of the magnificent ruins of Dunure Castle.

Most of what is visible today dates to the 14th to 16th centuries, and like Culzean Castle belonged to the Kennedy family.

A feud between various branches of the Kennedy family in the late 16th century led to the castle being besieged and much damaged being done. The ruins have since become filled up with mud and sand so that you can now walk (or more correctly crawl) under the vaults of the upper floors.

Beyond the vaults are the remains of an old six storey keep which is now roofless and lacking most of its walls.

Being so high up there are great views from up here, including down onto the probably 16th century doocot which stands next to the castle.

To the south of the keep is a 16th century kitchen wing.

The keep gives just a hint of what an impressive building this must once have been.

At the bottom of the keep is what appears to be the remains of passage leading down to a postern gate.

After a good explore of the castle we drove up above the village to get a different view of it.

Not far from Dunure Castle is Dunduff Castle, a late 16th century tower house which was restored and converted into a private home in the late 20th century.

Next on our list was Greenan Castle. Unfortunately with time marching on we didn’t have time to visit it properly and were limited to a couple of distance shots.

Another Kennedy property, it occupies a precarious position perched on the edge of a cliff.

Being so close to Alloway we had to take a detour to Burns Cottage, although being by this point late evening on a Sunday it was closed.

Famously the home of the poet Robert Burns, it’s a rather picturesque building with its thatched roof. The bard’s image appears on lampposts in the village.

From Alloway we drove back into Ayr – from where we had left this morning so we weren’t exactly making progress home – for another distance shot, this time of the hill on which a castle once stood (known as Castlehill). It’s not the most interesting of photos, but it was all we had time for.

Back where we started the day and with several castles seen it was time to get some miles in, so we set off north for our return journey to Edinburgh via Glasgow and the M8. However at Kilmarnock we decided to go “cross country” and took the slower but more interesting A71, which took us to Strathaven.

I knew there was a Strathaven Castle but I couldn’t remember what if anything there was left of it, and we didn’t have a detailed map of the area, so we weren’t hopeful of finding it. But as luck would have it while driving through the town we rounded a corner and there it was!

First built in the 12th century, the present castle dates mainly from the 15th century, with a round corner tower probably added in the 16th century.

From the road side the castle seems in relatively good condition, however walking around the round tower it soon becomes clear that this isn’t the case.

Just one tall but narrow section of the south wall remains standing, the rest having fallen in the mid-19th century.

The interior of the castle has no real discernible features save for an arched niche, the ruins having been unsympathetically consolidated with the liberal application of concrete during the 1960s.

While the consolidation work could perhaps have been carried out with a lighter touch we should be grateful that the castle was saved, as it was under the very real threat of demolition at that time.

With the light fading it was time to stop the sight-seeing and finally head for home.