The lost tower of Rakestonleis

Forgive me dear readers for it’s been 2 years since my last blog post!

A few years ago I came across a reference to Rakestonleis, a tower in the very south-west of Roxburghshire close to the border with England. Little seems to be known about it beyond it belonging to a Martin Crozier.

I added it to my website in the location given by Canmore, on the Caddroun Burn, with their name of Caddroun Burn Tower. The Canmore entry didn’t give much in the way of a history so I added it to my (very long) list of castles to research the history of at a future date.

Recently I was looking at Joan Blaeu’s mid-17th century map of Liddesdale while researching another castle and spotted the tower of Baikstontyes which reminded me to go back and look into Rakestonleis.

Blaeu’s maps were often based on the late 16th / early 17th century work of Timothy Pont who produced maps that can be quite difficult to read, with multiple corrections and names and sketches overlapping each other. As such transcription errors occurred and it seems likely that Blaeu’s Baikstontyes was originally Baikstonlyes on Pont’s now lost map of the area.

I’m a great believer in going back to the original source wherever possible when researching histories. In this case the Canmore entry informs us that it’s a map held by the British Library, part of an atlas made by Christopher Saxton under the patronage of Thomas Seckford and owned by William Cecil, 1st Baron Burghley, giving it it’s common name, The Burghley Atlas.

The map, produced in December 1590, shows the prominent properties of the south-west border area between Scotland and the West Marches of England, and includes a tower at the top of the map labelled with the caption “Martin Crosiers of Bakstonleis”. The name Rakestonleis seems to have come from a misreading of Bakstonleis on this map. 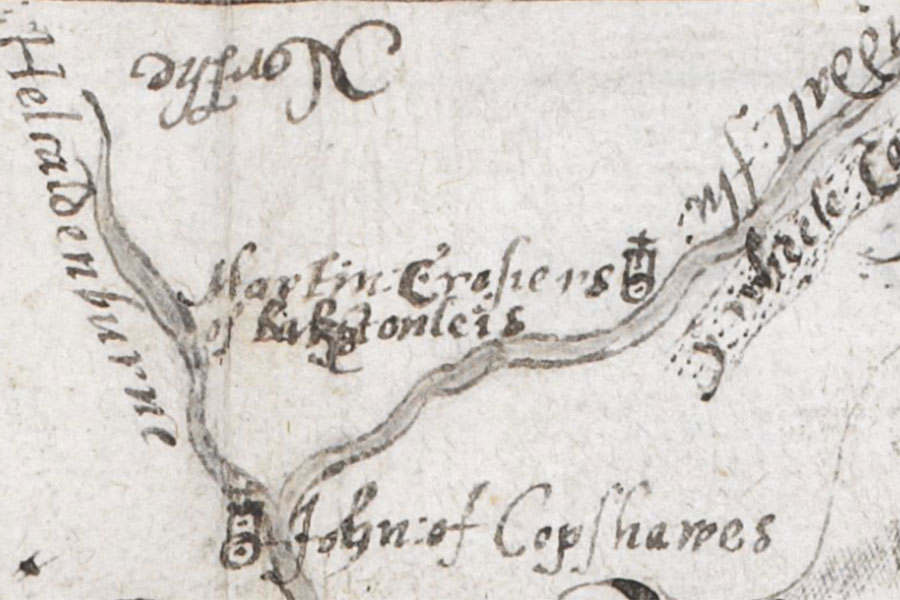 Having established that the place I was looking for was in fact Bakstonleis and not Rakestonleis I looked at the modern Ordnance Survey map to see if I could find a name that looked similar, but I couldn’t find anything close. I then looked at what else was marked on the Burghley map to try to narrow down the search area.

Martin Crosier’s tower of Bakstonleis is shown on the west bank of the “Liddall flu” or Liddel Water, “flu” being an abbreviation for the Latin for river, “flumen” or “fluvius”. On the opposite bank is “y Wheele Cawsey”, the Wheel Causey or Wheel Causeway, a major medieval road from Roxburgh to Annandale. Some distance downstream is a confluence between the Liddel Water and the “Helcaldenburne”, also known as the Hellcaddrounburn or Caddroun Burn. Just south of the confluence, on the west bank of the Liddel Water, is a tower labelled “John of Copshawes“.

These clues helped to further narrow the area of interest. The site of John of Copshaw’s Tower is known near the confluence of the Liddel Water and the Caddroun Burn. The Liddel Water seems to stop being referred to that name around Myredykes but its major tributary flowing from the north is the Peel Burn, and running along the west side of the Peel Burn is the Wheel Causeway. On the east side of the Peel Burn is a building named Peel, which of course is an old name for a tower.

Working on the assumption that the Peel Burn was once known as a continuation of the Liddel Water and that Saxton had confused the east and west banks, quite a common occurrence in old maps, I continued looking at old maps. The map in the Burghley Atlas is the earliest representation followed by Blaeu’s mid-17th century Baikstontyes. Blaeu’s representation of the area around Baikstontyes is a bit confused, but there are elements there that are helpful. 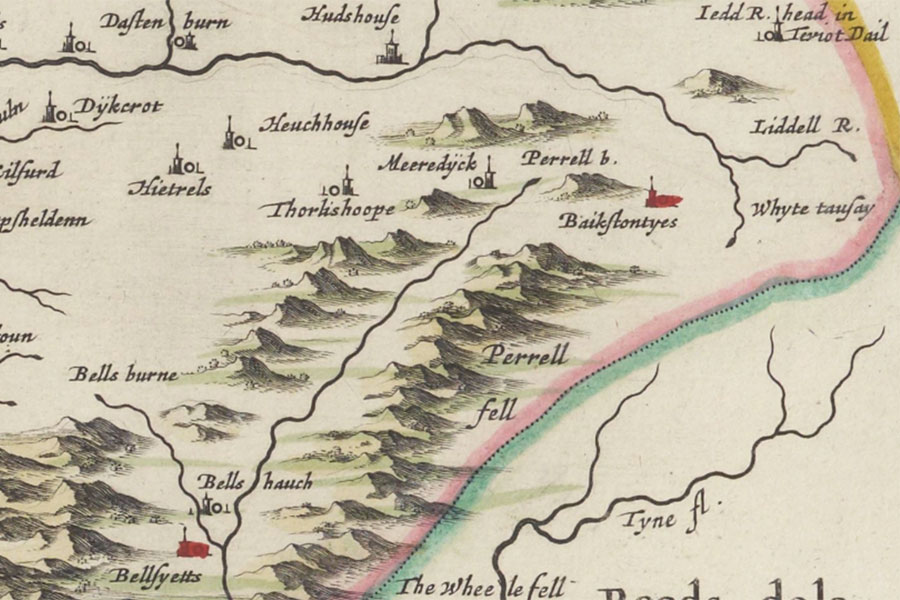 The Liddell River is shown curving up above and away from Baikstontyes, while the Perrell burn runs away from Baikstontyes down the edge of Perrell fell to a confluence with the Bells burne at Bellshauch and Bellsyetts. Across the Perrell burn from Baikstontyes is Meeredÿck and beyond that Thorlishoope. Blaeu seems to have conflated the Liddel Water and the Peel Burn which has made the positioning of the various towers nearby, such as Thorlishoope, Hudshouse, Dastenburn and Dÿkcrot, slightly muddled. However it would seem clear that Perrell fell is Peel Fell, the Perrell burn is Peel burn, Meeredÿck is Myredykes, Bellshauch is Bewshaugh, and the Bells burne is Bells Burn which drains from Bells Moor and passes Bellsburnfoot, Bells Chapel and Bells Burn.

But there the cartographic trail runs cold. The next map to cover the area is William Roy’s map of the Lowlands, produced between 1752 and 1755, which shows three buildings and enclosed gardens named Peel.

Comparing the old and modern maps I was fairly sure that Bakstonleis and Peel were the same place, but I had no conclusive proof so I started searching for references to the place in books. I had no joy with the spellings Bakstonleis, Baikstontyes, Baikstonlyes and Rakestonleis, nor when altering the spelling slightly, so I changed tack and started searching for references to the Crozier family in the Borders in the 16th century.

This led me to the spelling “Baxtoun lee” in the first volume of The Border Papers which in turn led me to a reference to Baxtounlees in The Annals of a Border Club, which confirmed that when Thomas Scott, tenant of Lethem and second son of John Scott of Ashtrees, bought Baxtounlees from Archibald Douglas, 1st Baron Douglas of Douglas, in 1807 he renamed it Peel.

Canmore actually have a separate entry for Peel Tower in the right location but with none of the information that appears on the entry for Caddroun Burn Tower identifying it as Rakestonleis.

You can read more about the history of Baxtonlees here.

A Hawick Word Book
The Annals of a Border Club
The Border Papers, Volume 1