Red squirrels at Eskrigg Reserve (and some castles)

Forgive me faithful followers for it has been two years since my last blog post. The mundanities of real life conspired against me and blogging slipped down a long list of things to do. I shall endeavour to do better!

Recently we found ourselves heading south from Edinburgh and so decided to call in at Eskrigg Reserve just outside Lockerbie in the hope of seeing some red squirrels. The nature reserve is a short detour from the M74 but we opted for a cross country route and instead took the A701.

Our first stop was Halmyre House, a private 19th century mansion which incorporates the remains of a probable 16th century castle, just beyond Whitmuir (which is an excellent place to stop for nourishment).

The oldest part of the building contains two vaulted chambers from the basement of an old castle of the Tweedies of Drumelzier who owned it until the early 17th century. The house was extensively remodelled in 1856 in the Scots baronial style and was later inherited by the eccentric gun collector Charles Gordon.

Next on the list was the site of a castle called Kittlehall which required a slight detour just to the south of Broughton but on the way past we stopped briefly at Harehill Knowe, a probable prehistoric burial cairn on the flood plain of Holms Water.

Across the road from the cairn I spotted five deer grazing on the slopes of Rachan Hill. Actually I only spotted three but noticed two more while processing the photos later. 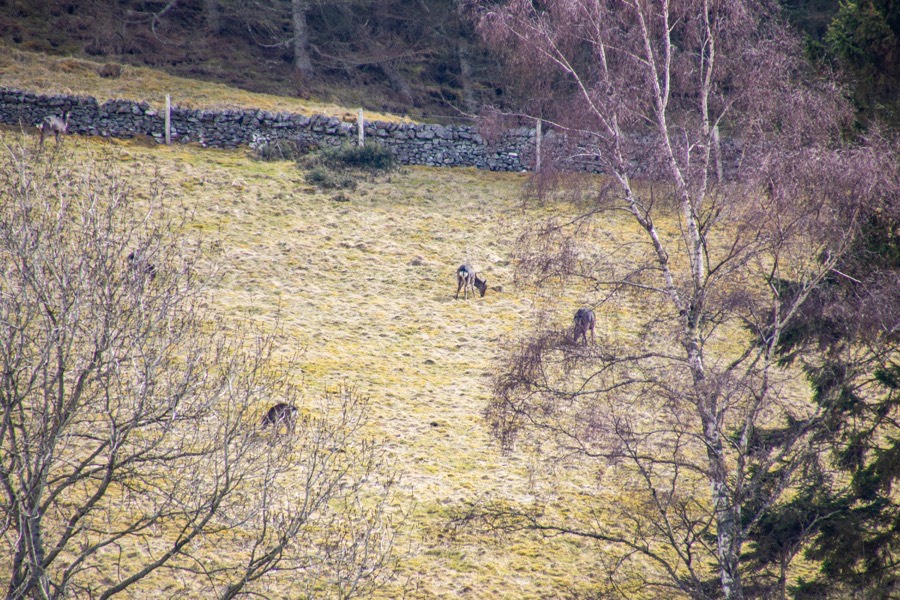 Further down the road we reached the site of Kittlehall, a castle belonging to the family of Geddes of Rachan, which was probably built in the 16th century.

By 1775 the tower was in ruins and was replaced by the house of Rachan to the north-east. Although there are no longer any remains of the castle it’s quite a picturesque spot. The ruins of another property of the Geddes family, Wrae Tower, can be seen in the distance.

We retraced our steps and rejoined the main road, just before it starts to follow the River Tweed, but after only a few more kilometres of twisty country roads we stopped again, this time without deviating from our route. Just outside the village of Tweedsmuir the fort known as Oliver Castle can be seen from the road.

Another castle of the Tweedies, also named Oliver Castle, is mentioned in a document at the beginning of the 13th century but its exact location is not known. It has suggested that it may have stood within the fort of the same name although this isn’t clear and requires further research.

A few hundred metres away jutting out into the road is The Bield, formerly a coaching inn on the road from Edinburgh to Moffat and Carlisle.

On one of the window lintels is the date 1726 however the house is built on the site of, and may possibly incorporate part of, Bield Tower.

We continued to follow the Tweed, the road gradually climbing as we approached Tweed’s Well – the source of the River Tweed. As is often the case with river sources there isn’t a great deal to see, the water emerging from the landscape and forming ever-growing trickles as it begins its 156 kilometre journey to the east coast. 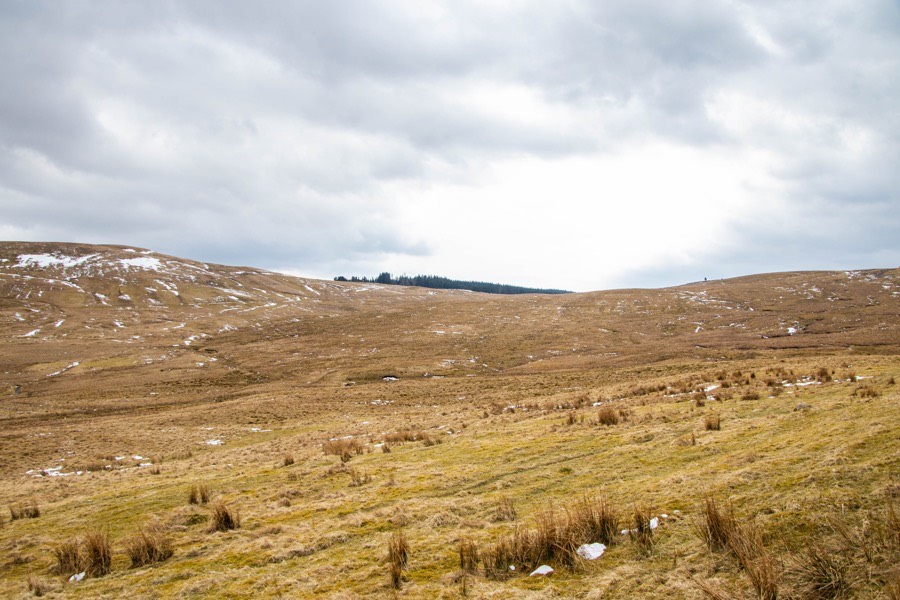 Interestingly three of Scotland’s major rivers, the Tweed, the Clyde and the Annan, rise in these hills:

The view back along the road down the Tweed valley was an impressive sight, although not nearly as impressive as what was to come. 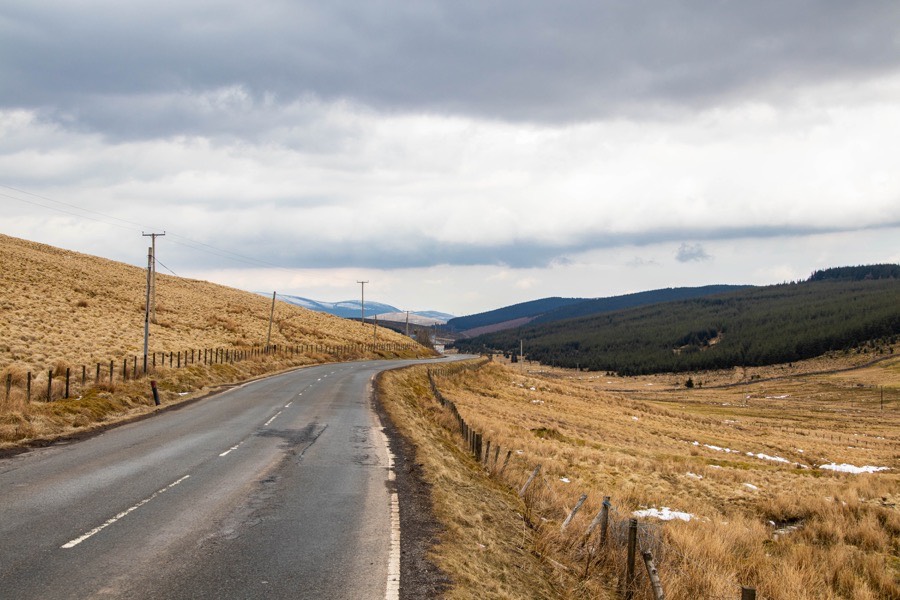 Our next stop was again just a few hundred metres on. Around a couple of twisty corners we were stopped in our tracks, almost literally, by the magnificent view down into the Devil’s Beef Tub, a dramatic 150 metre deep hollow between four hills and one of two main sources of the aforementioned River Annan. 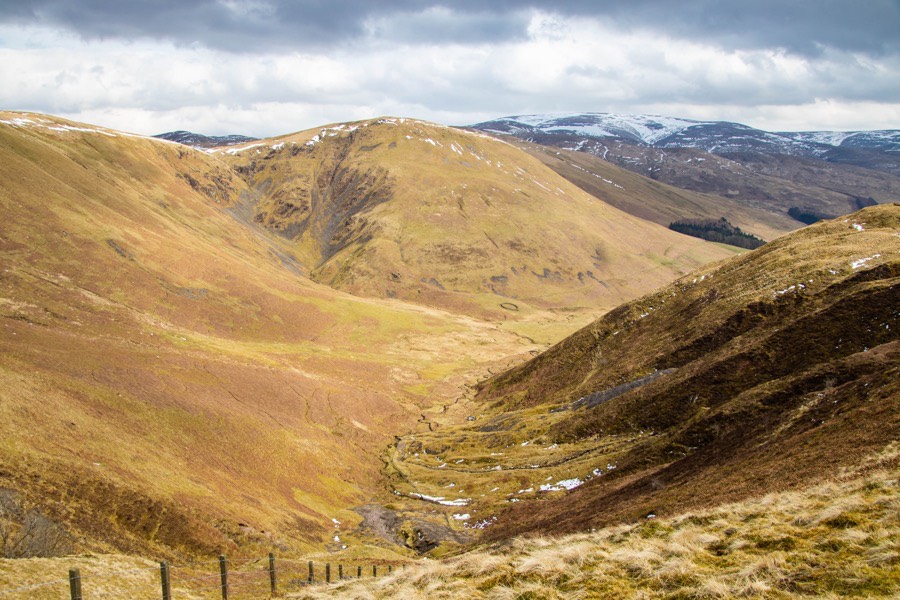 Having made numerous stops already we made a decision to crack on, however we couldn’t resist one more stop at Lochhouse Tower.

A beautifully-restored 16th century tower house, it can now be rented as self-catering holiday accommodation.

Our country road exploring was over for today as we joined the M74 motorway on our journey south, but as we approached Lockerbie we turned off for our final stop at Eskrigg Reserve. Consisting of seven acres of mixed woodland around an old curling pond on the Castle Milk estate (named for Castlemilk, a castle of the Bruces dating back to the 12th or 13th centuries), it has gradually developed since the 1980s into a great wee nature reserve. It happens to be an excellent place to see red squirrels, and that was the main reason for our visit.

We made our way to the purpose-built hide at the edge of the pond and settled in. We only had to wait a matter of minutes before we saw our first red squirrel, perched on a broken branch while nibbling on a nut. 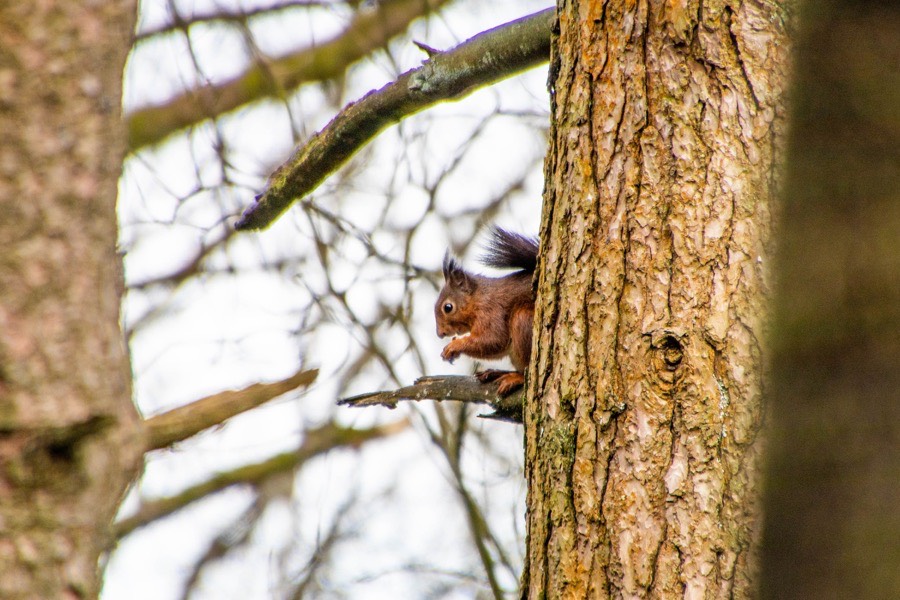 He was soon followed by several other squirrels who came to explore the feeders. I’ll let the photos of these adorable animals do the talking. 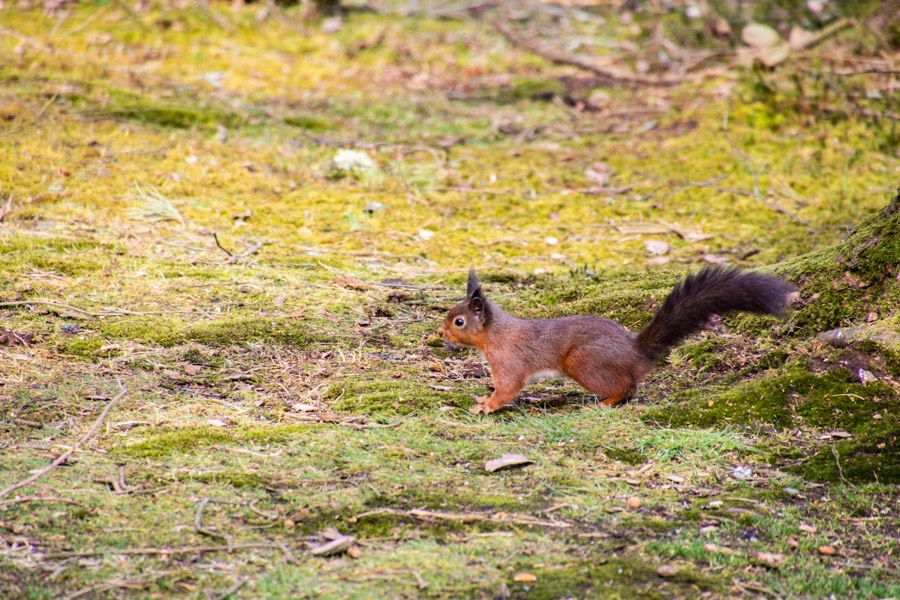 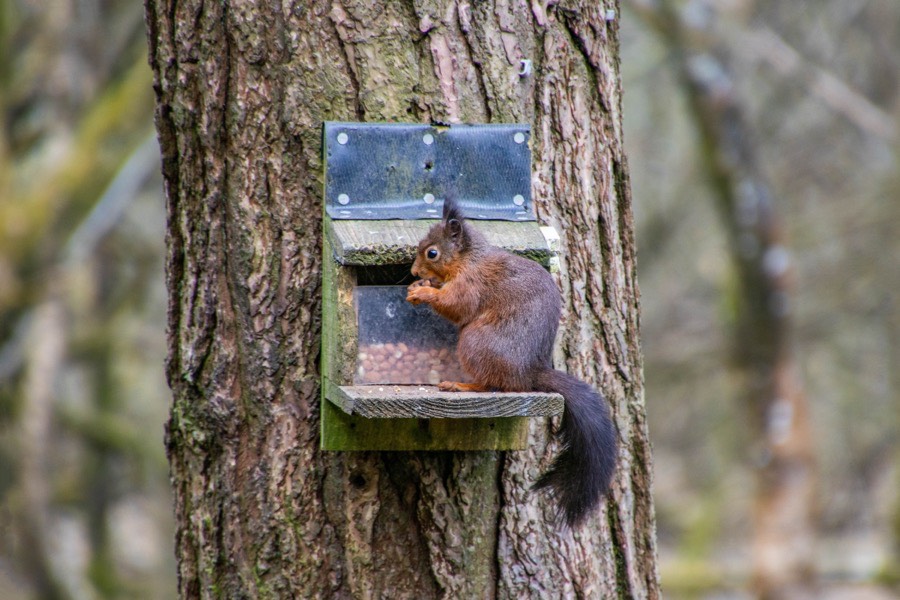 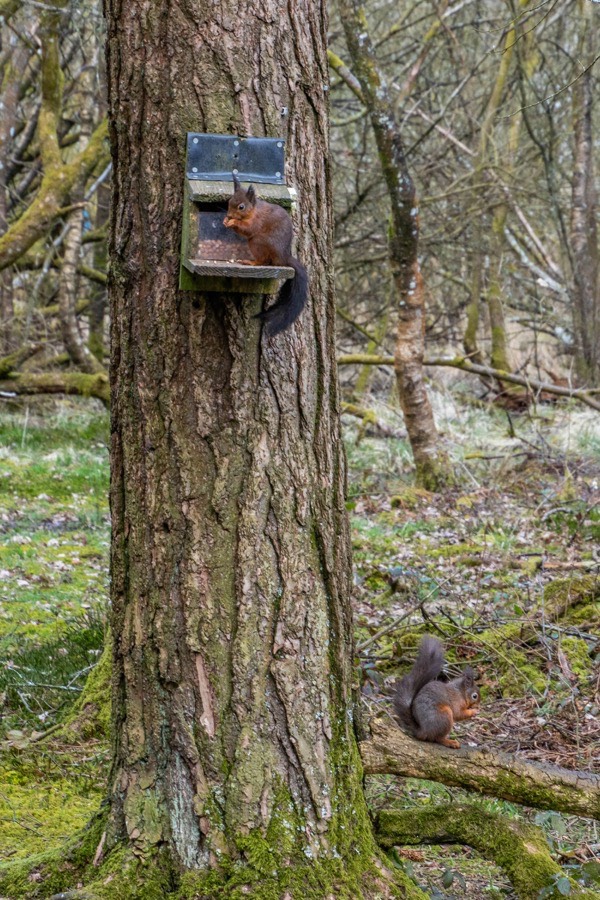 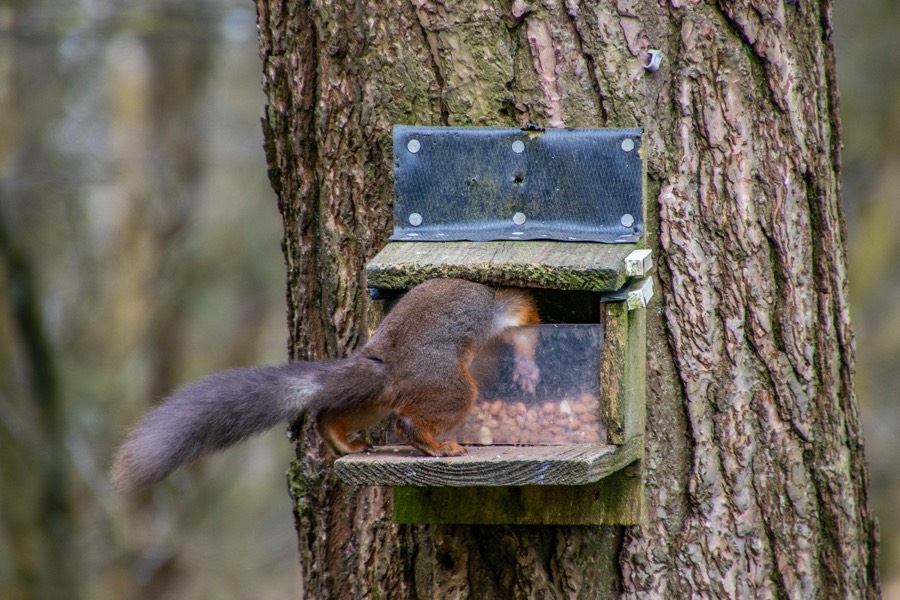 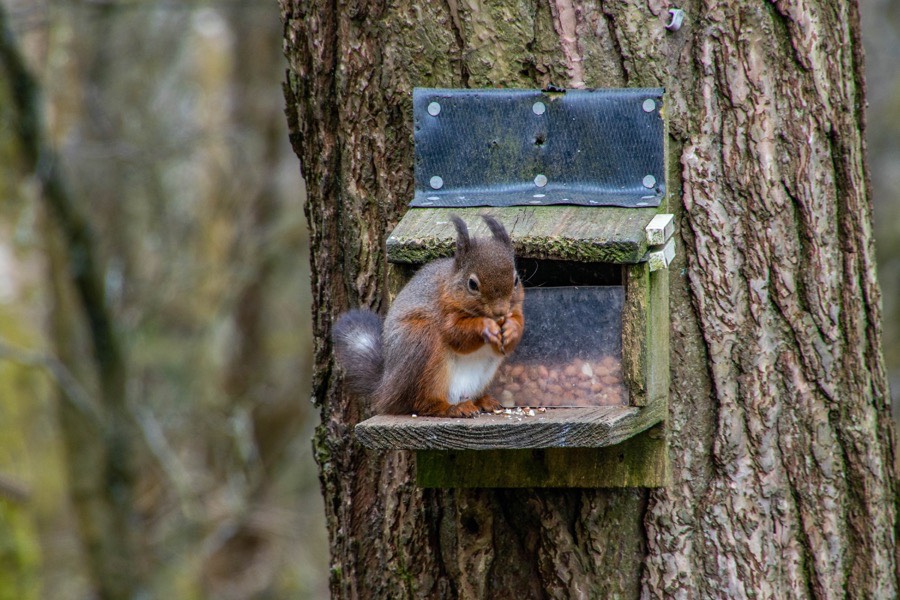 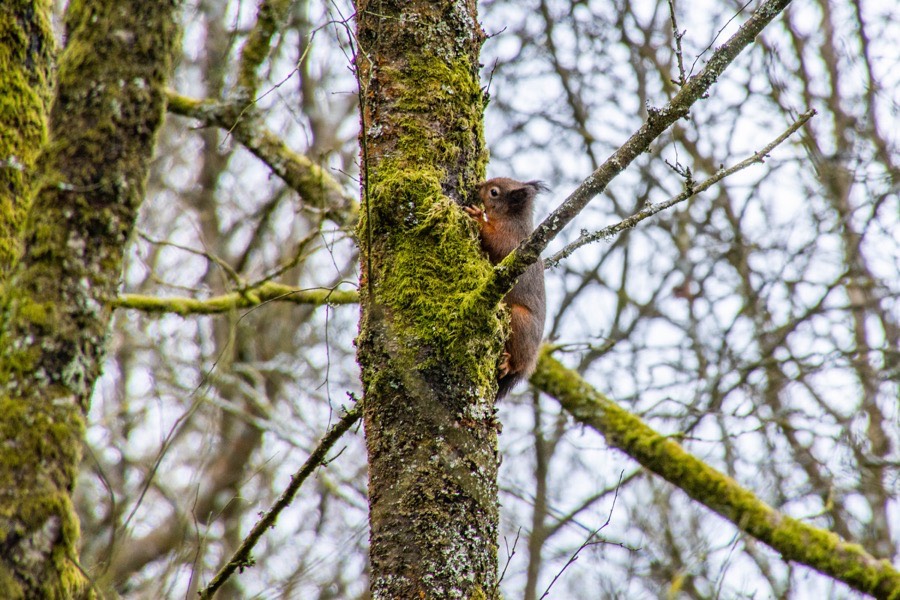 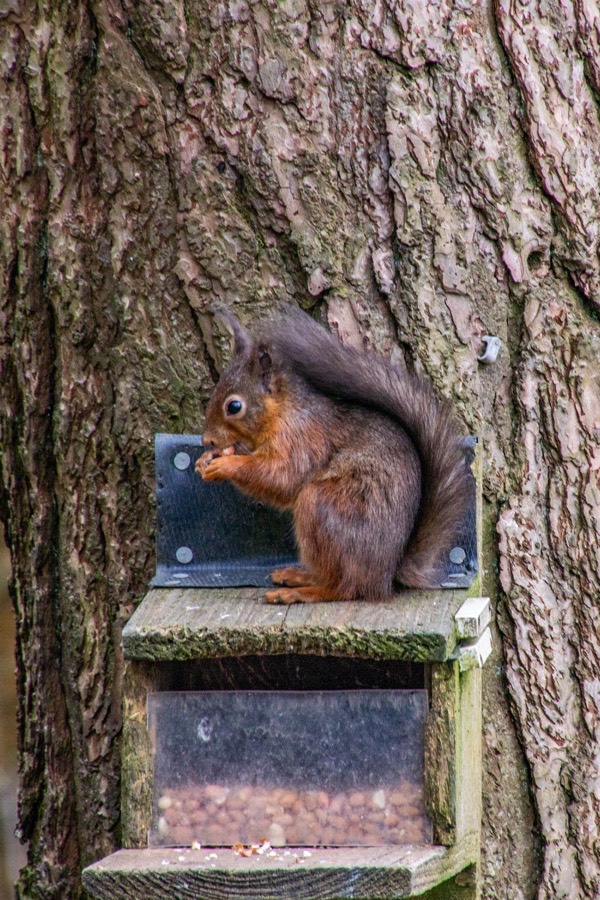 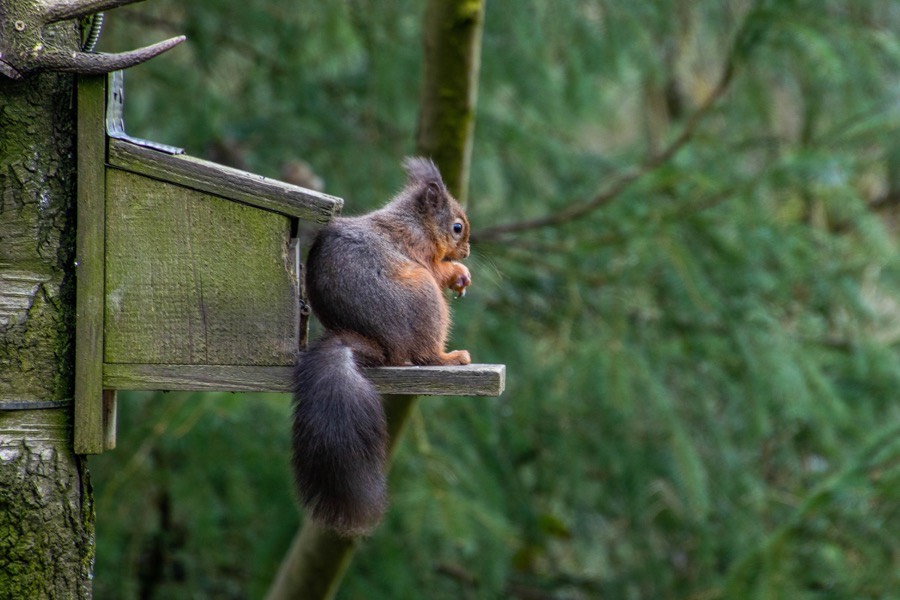 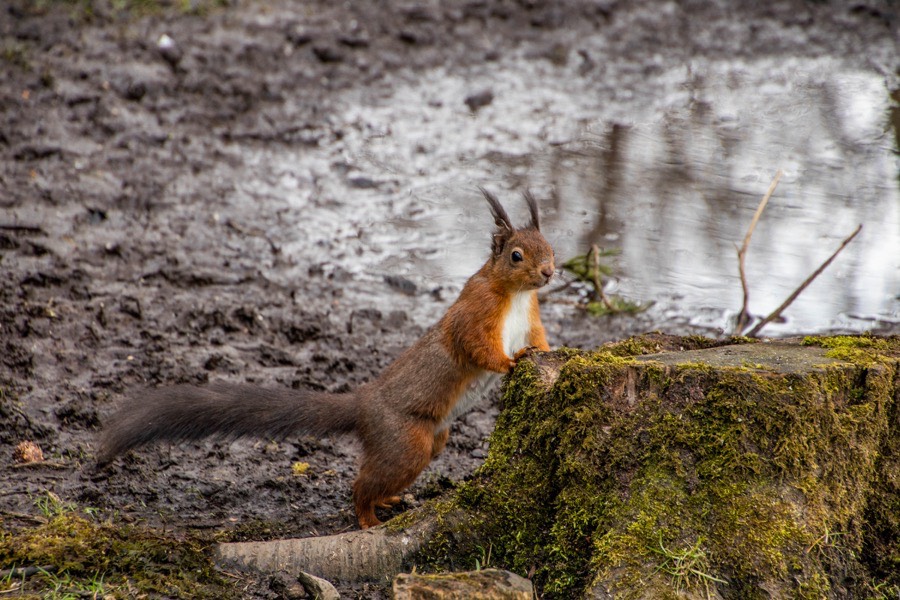 This suckling female was chewing on a deer antler nailed to a tree, which they apparently do to absorb extra nutrients.

One greedy male climbed right into the feeder for a better rummage through the nuts, the lid closing behind him. He was in there for a good few minutes and while he was enjoying his lunch a second male appeared and sat on the lid, seemingly unaware of his competitor within. 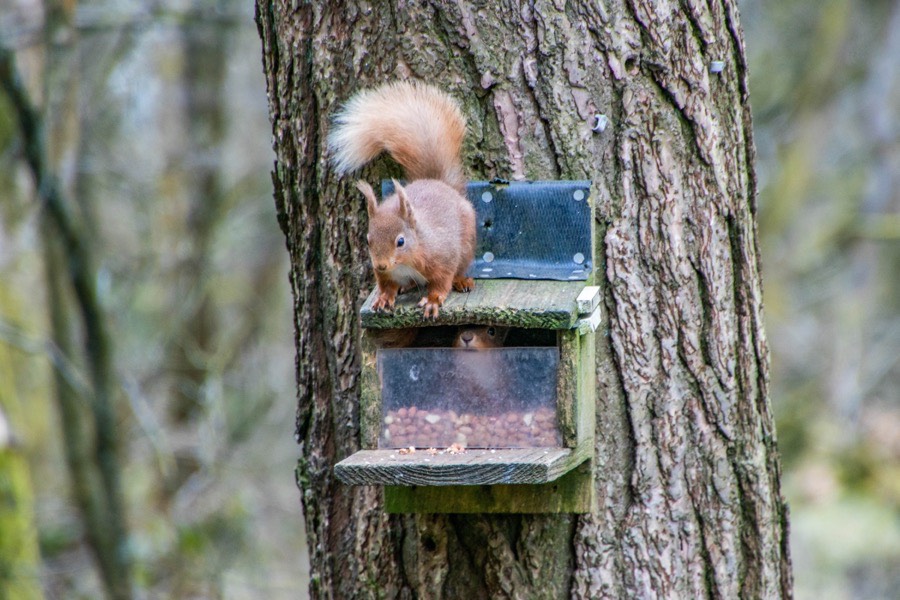 Just after I took this photo the squirrel in the feeder made his presence known by lifting the lid and the second squirrel scarpered around the tree. 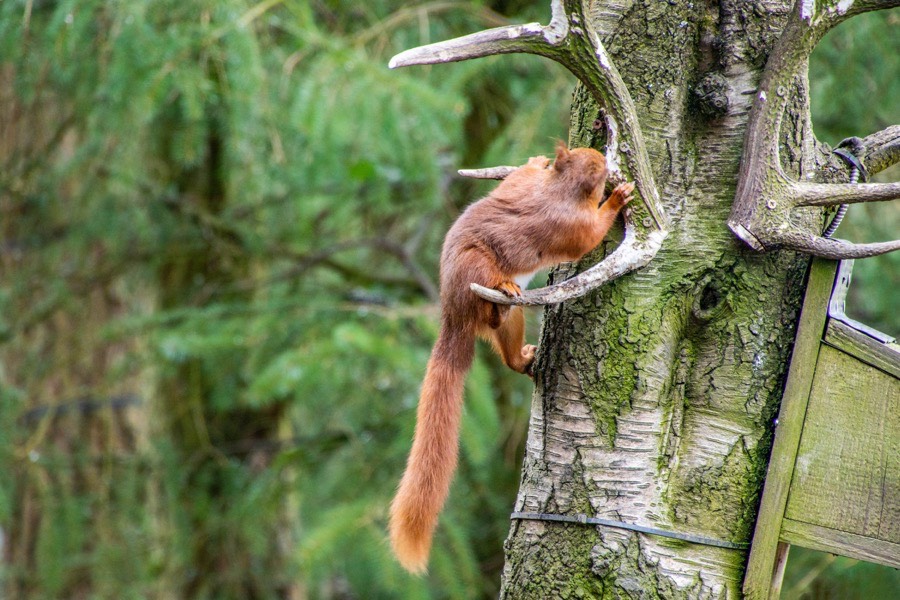 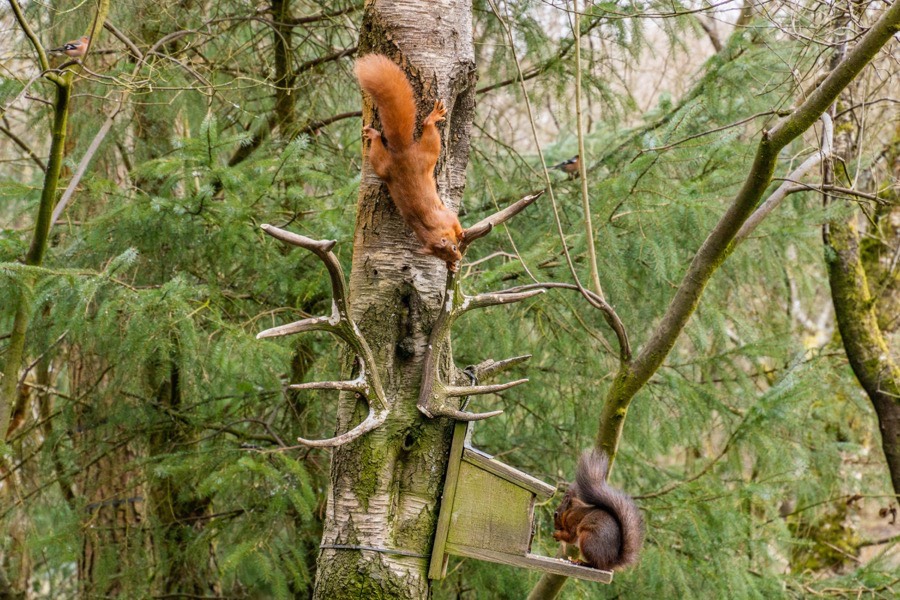 We could have watched the squirrels for hours longer than we did but we unfortunately had to drag ourselves away to continue on our journey south beyond the geographical remit of this website. As we got back to the car the rain started to fall with quite fortuitous timing. I’m sure we’ll be back!