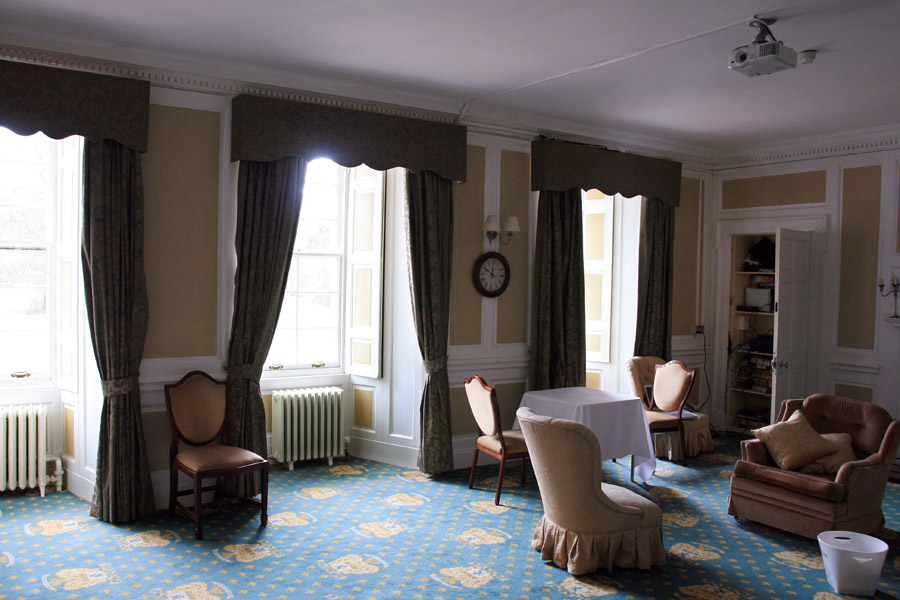 After breakfast at the Shieldhill Castle Hotel we climbed the intramural staircase at the entrance to have a look at one of the rooms in the old tower, now used as a conference room.

After checking out, we had a wander around outside, taking some photos of the castle. Above the entrance is a carved panel depicting a cross with the initials AC and HR either side of it, for Alexander Chancellor and his wife Helen Robertson.

During the course of the renovation of the old tower’s interior it was discovered that the first floor once contained a chapel. Part of an altar was found behind the panelling of what was then a library, along with a wall cavity that once held a piscina.

The original entrance door was apparently removed from the round tower, and set into the south face of the keep. A carved stone, reputedly part of the altar, has now been installed above the original door, and is carved with two shields either side of a decorative vane. The one on the left is apparently 15th century and bears the crest of the Chancellor family, while the one of the right’s meaning is unknown as it is too worn. Also carved are the initials “IHS” and “MA”.

On the west wall of the castle is an old door, above which is a carved panel which was found on the first floor of the castle during renovation, and is apparently part of a 15th century altar.

It would appear that work may have been done to the castle in the 17th century, as on the east wall there is a carved panel featuring a simple shield and the date 1619.

To the west of the castle, within its grounds, is a 17th century doocot, remodelled in the 19th century to resemble a castellated tower.

After leaving the castle we travelled the short distance to the small village of Quothquan, beyond which is Quothquan Law, the summit of which is crowned by an ancient fort.

Quothquan Law really dominates this area, and this is it from the other side.

From Quothquan we drove past Coulter motte, which we’d previously visited, and continued to the site of Hartree Tower. Nothing of it now remains, having been superseded by the nearby Hartree House and replaced by a farm steading.

A little further north are the remains of Boghall Castle, just outside Biggar.

Boghall was once one of the most important castles in southern Scotland, although only a few remnants remain.

The castle fell out of use in the 18th century, and was a ruin by the end of the 19th century.

Moving into Biggar itself, there is the site of an earlier castle on a motte now know as Gillespie Moat.

A large flat-topped mound, it rises above the Biggar Burn, and seems to have been abandoned in the 13th century, either for Boghall Castle or possibly for Biggar Castle.

Little seems to be known about Biggar Castle, and the site is now occupied by a shop.

Biggar’s main street retains its medieval layout, with a wide main street and many small closes running off it. If you look carefully there are plenty of centuries old buildings and architectural details, such as this old lintel carved with “ID : EM 1671”.

Biggar is home to many museums, including one dedicated to the Scottish car and truck company Albion Motors. 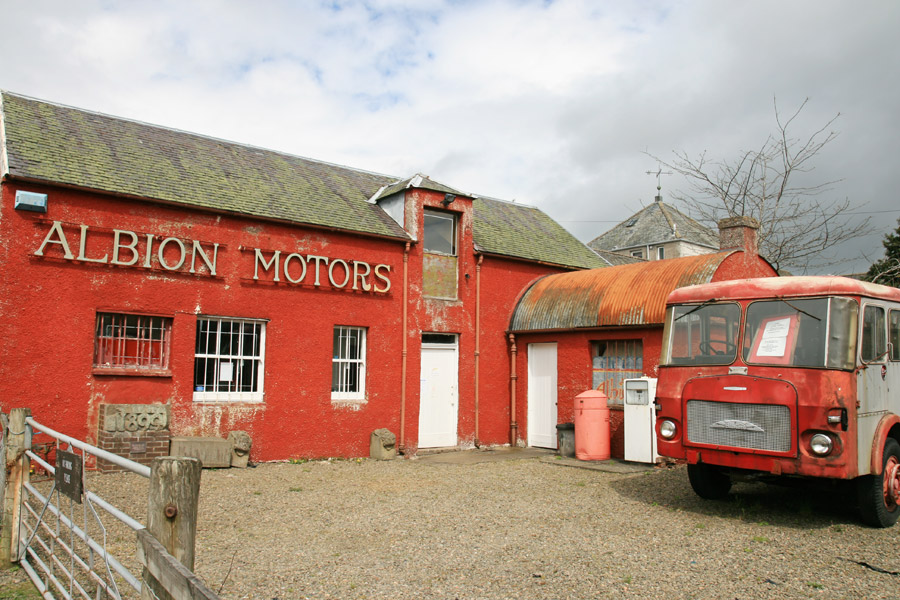 The museum was closed, but parked outside was an old Albion fire engine. 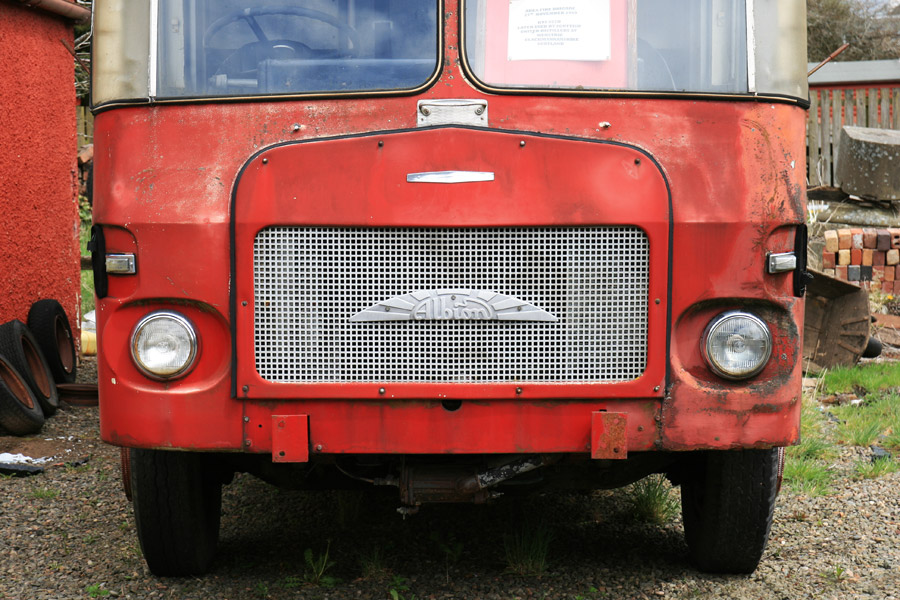 Close to the museum is Biggar Kirk, built in the 16th century on the site of a 12th century church.

After lunch at the Elphinstone Hotel we headed wast to Whitslade Tower, a ruined 16th century tower house of which only the ground floor remains, almost completely covered with ivy.

A low doorway in the east end gives access to a vaulted chamber which would originally have been the basement level of the tower.

A small opening in the south wall is a modified remnant of what was once the entrance to an external stair tower leading to the upper storeys.

While it’s a shame that more of the tower isn’t still standing, it’s good to see that the basement is still in a good condition.

To the east of Whitslade is the tiny village of Drumelzier, a place with a long and interesting history. Rising above the village is a fort, on top of which are the ruins of Tinnis Castle.

The surrounding fields were full of lambs, chomping away on the lush green grass. 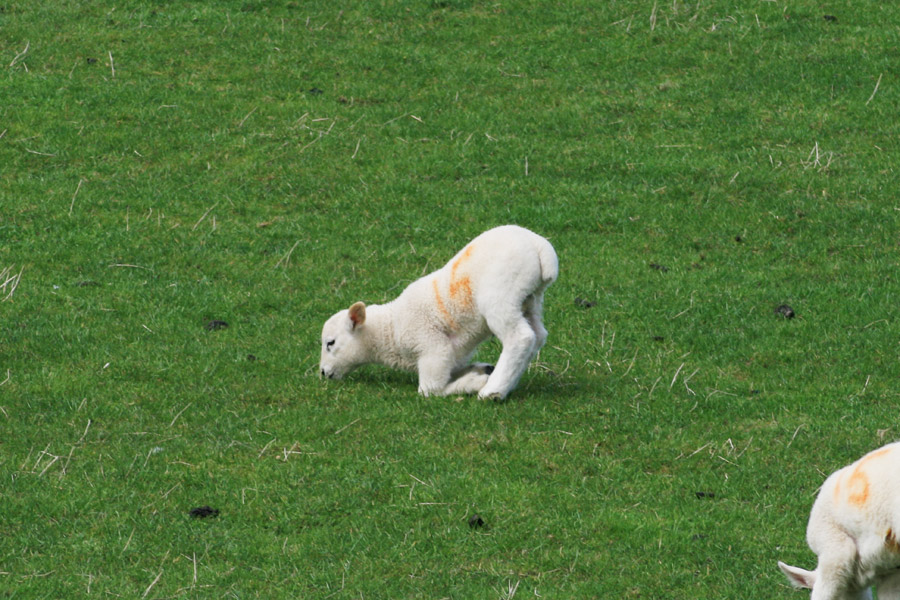 Down a narrow lane in Drumezlier is Drumezlier Church, beyond which is the supposed site of Merlin’s grave, just to the right of the track behind the two trees in the centre of the photo below. It has been suggested that the legend, which dates back to at least the 15th century, may have arisen as a result of the discovery of a cist, however it being the grave of the legendary wizard is far more interesting!

Drumelzier Church’s current appearance owes much to a 19th century renovation, however it has much older origins, and on the west wall is the entrance to an early 17th century burial vault for the Tweedies of Drumelzier.

The aforementioned Tweedies lived at the nearby Drumelzier Castle, now a ruin within Drumelzier Place Farm.

From Drumelzier we continued past Tinnis Castle, stopping to take a photo from the north-east.

Not far along this road is Dawyck Botanic Garden, an outpost of the Royal Botanic Garden Edinburgh. It is situated within the estate of Dawyck House, a private 19th century mansion built on the site of the old castle of Dawyck.

We didn’t have time to visit the gardens unfortunately, but did stop for a “second lunch” in their wonderful café.

Continuing along the banks for the River Tweed we reached Stobo Castle. Now a spa and luxury hotel, it is a 19th century castellated mansion built on the site of the old tower of Hillhouse.

A few hundred metres up the main road from Stobo Castle is Stobo Kirk, which dates back to the 12th century and was dedicated to St Mungo. Within the graveyard are some very old grave stones, including this one which looks like it marks the final resting place of a soldier.

Projecting from the north side of the church is a transeptal chapel which is 15th century in date, and houses some interesting items, more of which in a moment.

In the end wall of this chapel is a stained glass window showing St Kentigern converting Merlin to Christianity, which supposedly occurred in the 6th century.

Either side of the window are what would appear to be early medieval grave slabs. The one on the left depicts a full length figure of a man beside whom is a large sword.

Below the window is a large flat-topped stone built into the window sill. This is said to be a piece of the stone on which Merlin was converted to Christianity. The rest of the stone stands in situ next to Altarstone Farm, a few kilometres distant.

To the right of the window is a second grave slab, decorated with ancient script and showing a chalice of some kind.

The church seems to have been restored in the early 20th century, and has a magnificent roof.

From Stobo Kirk we made our way to the aforementioned Altarstone Farm, where across the road from the entrance is the eponymous altar stone, flat-topped like the piece of it in the church.

We continued west back to Broughton, then turned south on the A701 past Whitslade Tower, pausing briefly to take a photo of another ruined 16th century tower house, Wrae Tower.

We’d decided to take a longer, more scenic route home, hence heading south instead of north, and after a few kilometres we turned off for the Talla Reservoir. The weather had become a bit gloomy by this point, but that only added to the atmospheric, the low cloud covering the tops of the surrounding hills.

The road along the side of the Talla Reservoir is single track, but at least it is relatively flat and there is space to pass. The road to its neighbour, the Megget Reservoir, is also single track, but incredibly steep and twisty, and we had a slightly hairy and pretty unpleasant moment reversing down slowly to allow another car to pass.

Beyond the Megget Reservoir are two further bodies of water, the Loch of the Lowes and the larger St Mary’s Loch. Sitting between them on a narrow bit of land is the famous Tibbie Shiels Inn.

The inn was established by Isabella “Tibbie” Shiels, and hosted such celebrated visitors as James Hogg, the Ettrick Shephred, Walter Scott, Robert Louis Stevenson, William Gladstone and Thomas Carlyle amongst others. 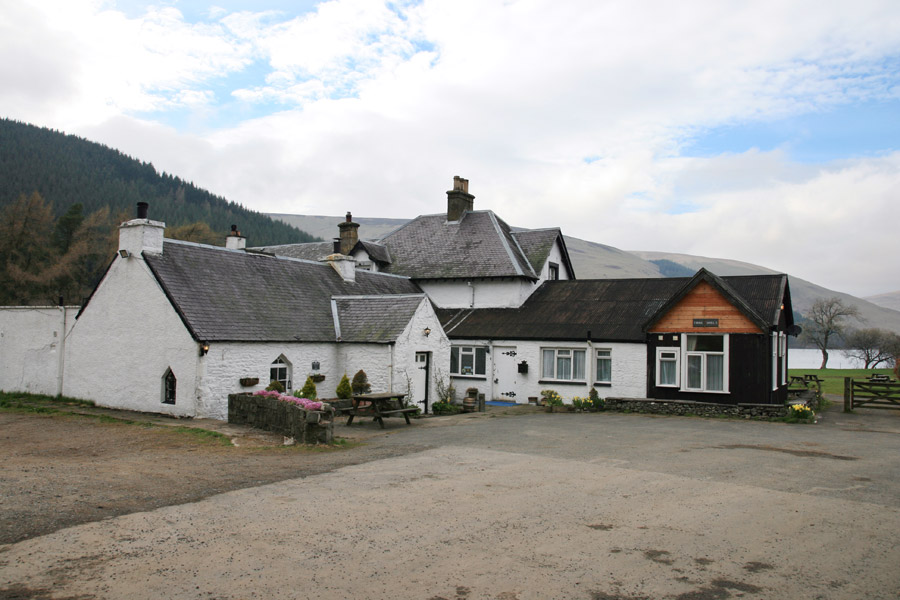 With time marching on, this was to be our last stop of the day, and we headed north for Edinburgh.