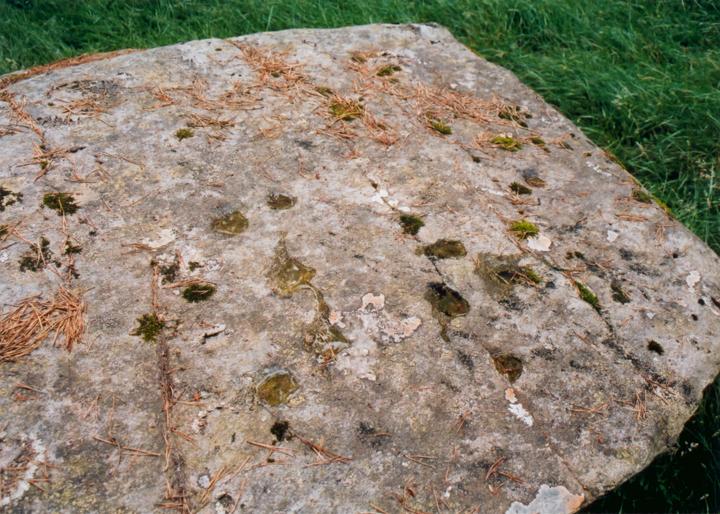 This site was identified as a possible stone circle in 1991 during forestry clearance. A cup-marked stone had already been recorded, standing amongst thin conifers (about 10 years in age). A huge rock, it has up to 28 cup marks carved into its flat upper surface. Some of these are very clear, others are very faint, and the stone has obviously suffered from weathering over the years. Just to the E, close to this central stone, is a smaller stone lying prostrate. It doesn’t appear to have any markings. George Currie and myself visited here on 2nd August 2003 to map out the site.

Further out from the central stone, there appears to be a circle of approximately 25m in diameter. Looking at the plan (see below), you can see that stones A, B, C and G are all the same distance from the central stone, and are equally spaced out 30 degrees from each other (G is 60 degrees from C, but it looks like E has been shifted from its original position halfway between G and C) which would suggest that they are close to their original positions in an original circle of 12 stones. However, there is a definite lack of stones to the E. Perhaps the circle consisted originally of 10 stones, and an “entrance” was left to the E, marked also by the stone closest to the cup-marked one.

Inside this circle are what could be the remains of a smaller circle with a diameter around the 14 or 15m mark, but these stones have been affected even more by the forestry than those in the outer ring. Further out from the outer ring there may also be the remains of two larger circles, but again the impact of forestry has been felt more keenly here. We also spotted, immediately to the W of the circle, what looks very suspiciously like a pair of cairns that have been flattened by forestry machinery.

This is a much disturbed site, but when you are standing there, the circular arrangement of the stones is very obvious. Most of them have obviously been moved around over the years by forestry machinery, but nonetheless this is a stone circle with a great atmosphere in a tranquil setting.

Upper Gaskan is in the parish of Blair Atholl and the county of Perthshire.

bed and breakfastAberfeldy
12.3km away

hotelBridge of Tilt
13.6km away

hotelBridge of Tilt
16.7km away