Cycling on the Tweed Walk

First of all I should say that I don’t really recommend cycling on the Tweed Walk as it leaves Peebles! It’s really not a good route for bikes, with too many tree branches crossing the track, and gates and stiles blocking the way, not to mention being too narrow in places to allow pedestrians to pass.

But we persevered, pushing our bikes along the first section from Hay Lodge Park along the banks of the River Tweed. It was a gloriously sunny day, but we soon headed into the trees, from where we got our first glimpse of Neidpath Castle.

Once out of the trees the path descends to the grassy flood plain of the Tweed, with Neidpath Castle perched high above on a rocky outcrop.

Dating back to the 13th century, the present castle is largely 14th century, although alterations were made in the 17th and 18th centuries. It is L-plan in shape, although the upper floors of the smaller projecting wing have fallen.

There are small, rounded caphouses on the north-east and south-east corners, overlooking the entrance to the east.

Interestingly the “corners” of the castle are rounded, giving it a softer look than the more usual crisp, sharp lines.

After rounding a bend in the Tweed and heading south, the track joins up with the old Symington, Biggar and Broughton Railway. The path climbs up onto the old railway line via steps, so more carrying of the bikes ensued. But once up onto the embankment there was a good track for cycling. Crossing the Tweed on the Neidpath Viaduct (in the direction of Peebles) brings you to an old railway tunnel.

There is a story that the Royal train was stored here while the King George VI and Queen Elizabeth inspected bomb damage in Glasgow, but whether or not this is a tale based on fact is unclear!

Originally I had planned to continue along the old railway to where it crosses the Lyne Water, and return past Barns Tower.

However the prospect of lifting two bikes over more gates and up and down more steps didn’t really appeal on such a hot day, so instead we left the railway at the confluence of the Tweed and the Manor Water, crossed the Tweed, then crossed the Manor Water on the Old Manor Bridge, built in 1702.

Having opted for a seemingly less strenuous route in the name of self-preservation, we were then faced with a steep climb, but the views south-west across the Tweed made it worthwhile. 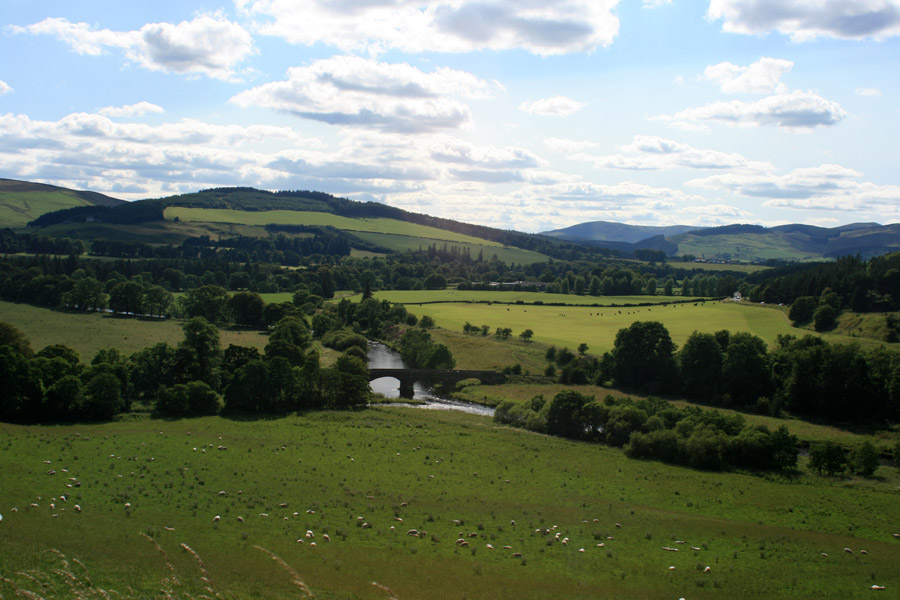 As the road finally levelled off we were rewarded with another great view, this time to the north-east over Peebles.

It was pretty much downhill all the way from there, freewheeling our way back to Peebles. After crossing the Tweed we stopped to have a look at the site of Peebles Castle, which once stood at the west end of the High Street.

The site is now occupied by the Old Parish Church of Peebles, and while nothing of the old castle can be seen from the front, if you start to cross Eddleston Water you can see that the church stands on a raised mound, which is probably the remains of the castle’s motte.