There was an open day at Winton House today, so we headed out towards Pencaitland in East Lothian. Having been lucky with the weather yesterday, there was unfortunately no sign of the sun today in the flat grey skies.

Winton House was originally a castle, built in the 15th century by the Seton family, but over the centuries it has been added to and modified, creating a grand country house. It is now owned by the Ogilvy family who open the house and grounds each year for an open day in aid of charity.

We parked the car and walked through the walled garden, where there were stalls selling various locally-produced crafts, food, drink and plants.

Passing through the opposite wall of the garden we got our first view of Winton House.

In a pen in front of the house were a sheep and her two cute lambs. 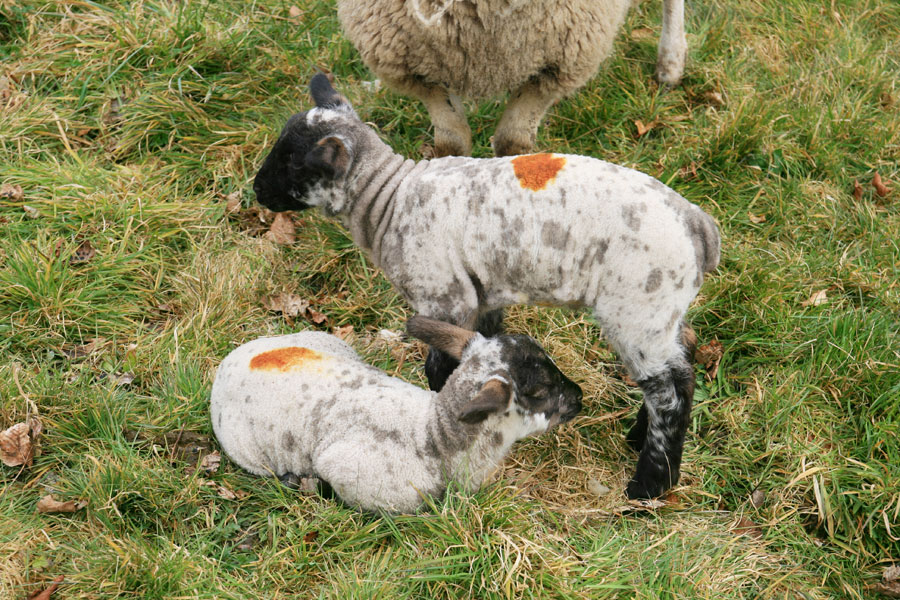 Also in the pen was a common frog, although I’m not sure if this was planned!

We walked around the back of the house in search of a cosy spot to have a picnic – easier said than done on a day like today. But we found a sheltered bench on the edge of the terraced gardens, under a tree. Despite the chill in the air, there was evidence on the ground that Spring had indeed sprung. 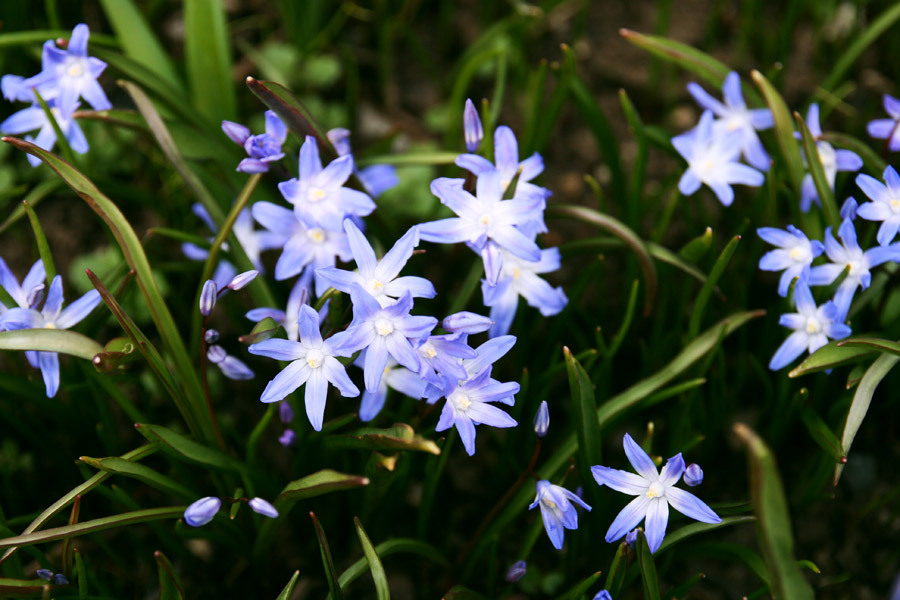 In a bid to warm up, we went into the house itself in search of the promised Café Winton. We clearly weren’t the only ones to have this idea as the place was packed, so instead we had a quick look in the basement, somewhere I was keen to see.

The basement is vaulted, evidence of the house’s earlier origins as a castle.

Back outside we wandered around the house, the main façade was built around 1805 in the Tudor style.

Parked outside the front of the house was a vintage ice cream van from the famous S. Luca of Musseburgh. 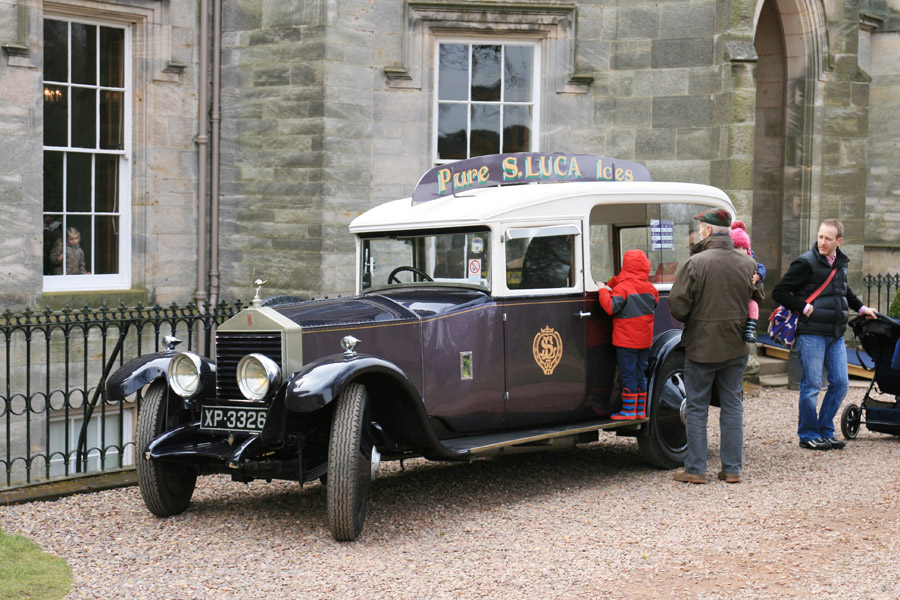 Moving around to the east of the house reveals some of the earlier fabric of the building however. The harled white gable end and extending wing are part of an L-shaped tower house, built between 1620 and 1627 by the King’s Master Mason, William Wallace, and topped off with wonderful twisted chimneys.

We moved down to the lowest of three terraces in the gardens to the south of the house, from where the full length of the L-plan Renaissance mansion can be seen.

Built into the walls of the upper terrace are three large carved stone details which presumably date from the early 17th century, and may have been removed at the time of the 19th century additions. The centre of the three is the Royal coat of arms of James VI.

While we were translating the Latin inscription, a rustling noise caught our attention. Below the carving, darting out from under the safety of a wooden plank, was a family of field mice, two tiny adults and an even tinier youngster. 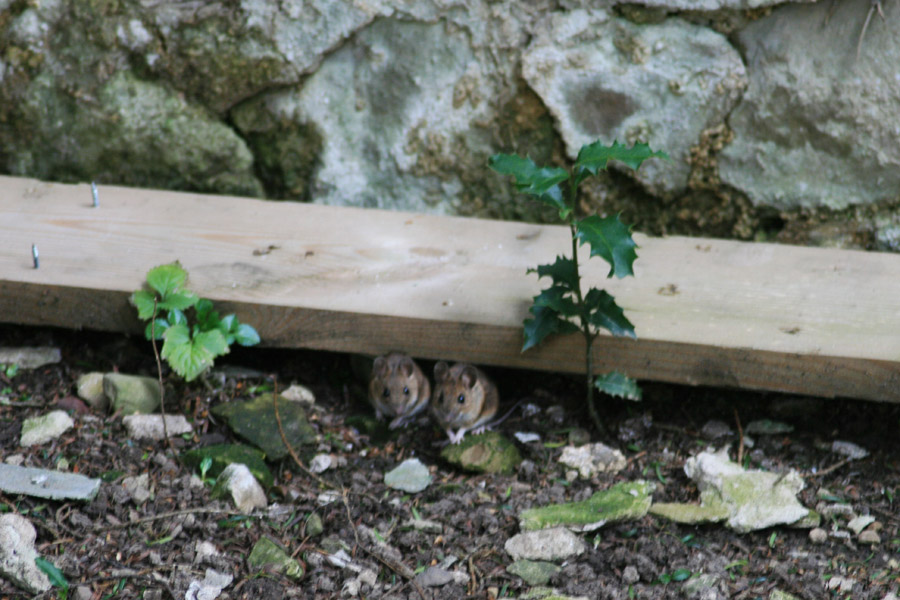 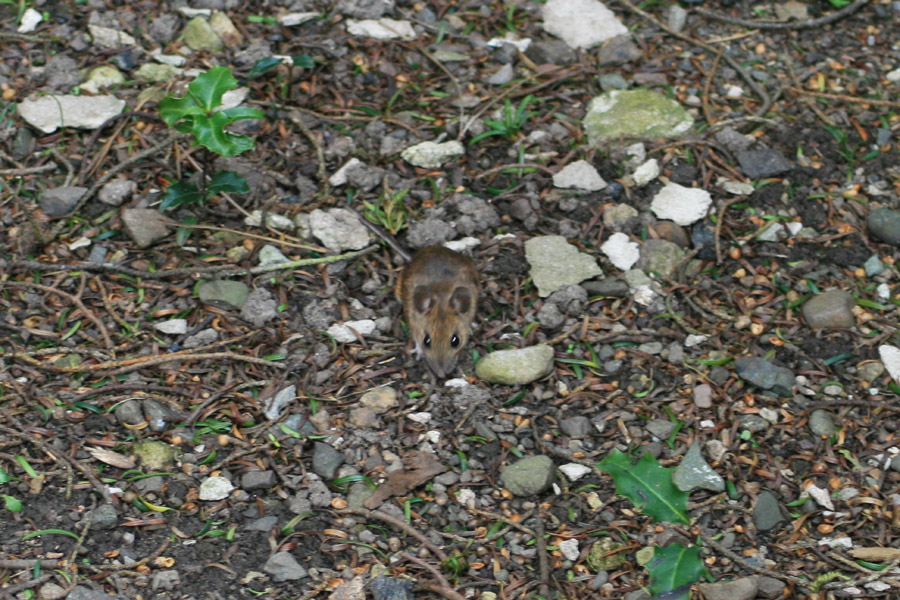 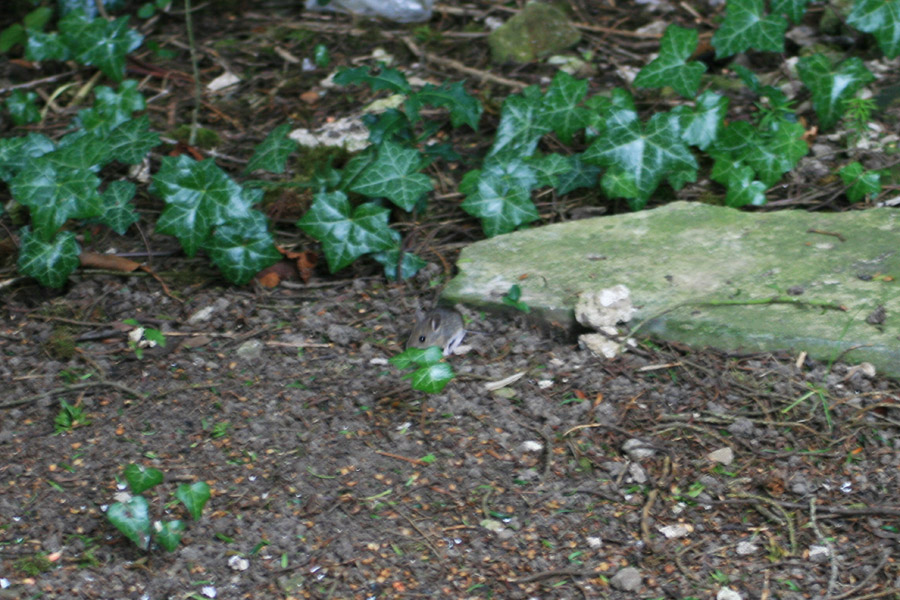 We made our way back down to the lower terrace and followed a path along the edge of an ornamental pond which was lined with tall reeds, providing a golden splash of colour on an otherwise uniformly grey day. 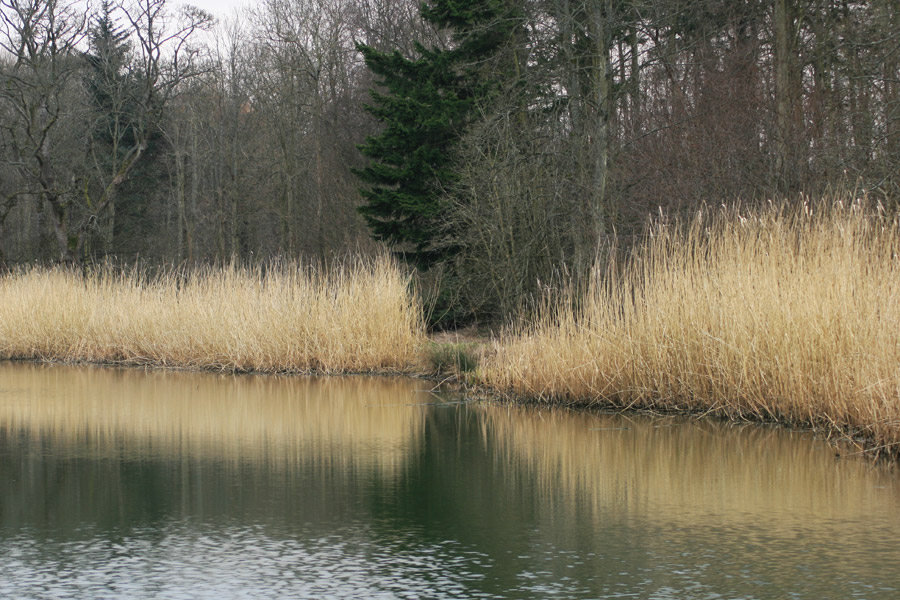 Further along the path we caught sight of some hardy souls braving the weather in a pair of hovercraft. It looked good fun, but I’d imagine it was pretty chilly for those who dared.

We returned towards the house along a track which joined onto the driveway, giving us a view of the west side of the house. Although the 19th century west wing and square tower above dominate, behind them can be seen the north and west ends of the L-plan tower house and its octagonal stair turret within the re-entrant angle.

On our way back to the car we passed the old stables which now house Winton Pottery.

We left Winton House via the south driveway, turning through Pencaitland and over the three arched bridge, built in 1510, which crosses the River Tyne. At the west end of the village is Wester Pencaitland doocot, a 17th century lectern style example. I’m not sure if it is associated with Winton House or Pirn Castle, which stood in a field further west but no trace of which now remains.

We continued west, turning north past Cousland on our way to Carberry Tower, another castle extended and converted into a country house, and now operating as a luxury hotel.

Our room was on the top floor at the back of the hotel, overlooking the grounds.

After unpacking we set off to explore the public rooms. To the south of the hotel, visible from the Elphinstone Room, is an Italian rose garden which Queen Elizabeth the Queen Mother gave to her sister, Lady Mary Bowes-Lyon, upon her marriage to Lord Elphinstone, the then owner of Carberry Tower. Beyond the garden is a large copper beech tree which is said to cover a third of an acre.

Along from the Elphinstone Room is the North Library, which has an ornate ceiling dating to the 1860s.

Moving through thick walls into the old castle‘s tower reveals the Beacon Room, in what would presumably have originally been the Great Hall, now a snug.

The main staircase in the 19th century part of the hotel is a rather grand affair, Jacobean in style and lit by stained glass windows.

On the ground floor the old vaulting still survives, and makes for an atmospheric bar area.

We decided to head off into the 35 acres of grounds for a walk before dinner. There are various paths criss-crossing the estate, but we were heading for Carberry Hill, where a monument marks the spot where Mary Queen of Scots surrendered following the Battle of Carberry Hill in 1567.

On the way we spotted a pair of roe deer in a field. 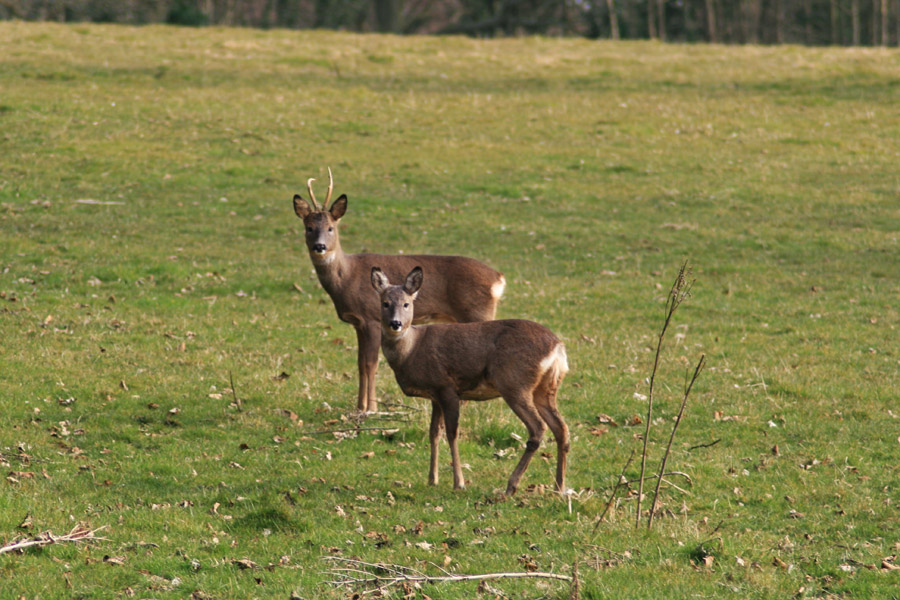 Unfortunately, due to inappropriate footwear as a result of attempting to travel light, we were defeated by mud in the forest and didn’t make it to all the way to the summit of Carberry Hill. It was still an enjoyable walk, and there is a good view from one of the estate paths of the rear of Carberry Tower.

We also saw a large pine tree avenue which presumably was once a driveway into the estate.

Just before getting back to the hotel we heard and then saw a robin following us along a fence. 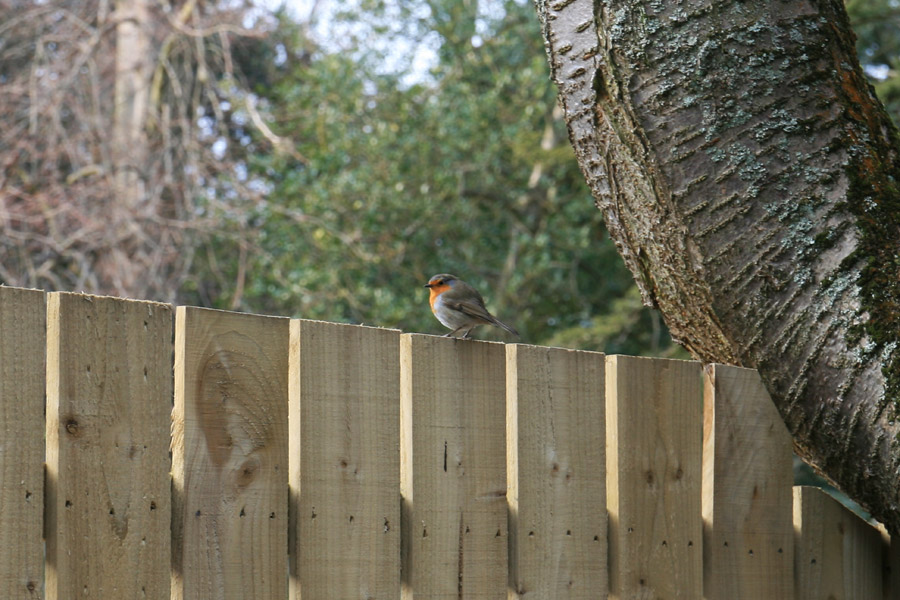 As impressive as the sprawling 19th century additions of Carberry Tower are, we were most interested in the tower itself, built in the 16th century and now the main entrance into the hotel.

After a quick spruce up we drove the short distance to Musselburgh, where we had booked a table at The Birdcage. While the restaurant is located in a thoroughly modern glass box, it is situated within the courtyard of a 19th century mill complex, with great views towards Stuart House. 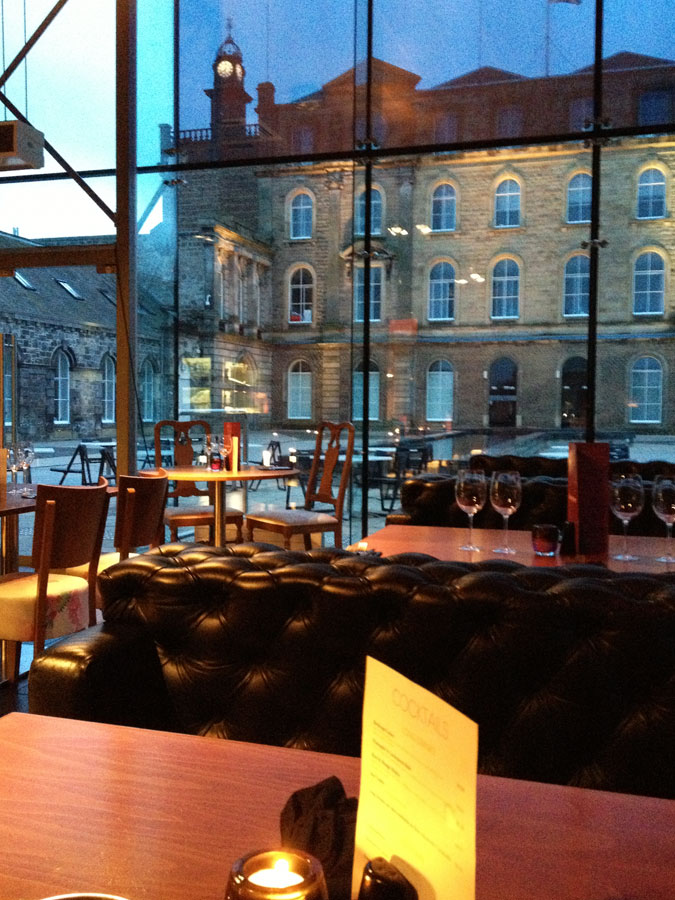 Interestingly the mill was originally owned by Colonel James Paterson, a Musselburgh native who patented the first machine capable of tying the knots of fishing nets. The food was good, and it had a pleasant atmosphere despite us (strangely, we thought, for a Sunday night) being outnumbered by the staff. 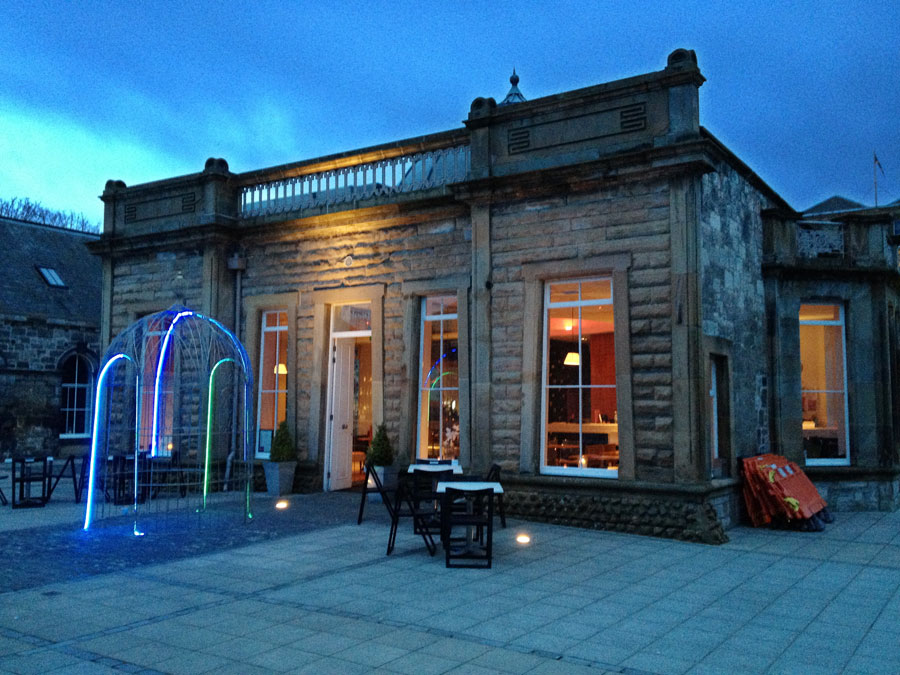 With a peach and almond cheesecake summarily despatched, we drove back to Carberry Tower for a nightcap in the vaulted bar.