After a few weeks of relative inactivity – due in part to spending the first couple of weeks of the year in Russia, then the Six Nations – we headed down to the Moorfoot Hills today, with the intention of combining a walk around the Gladhouse reservoir with a visit to Hirendean Castle.

We parked at the north-east end of the reservoir, leaving the car to be watched over by a flock of sheep.

Crossing a bridge over the eastern spur of the reservoir, we looked west to see rather ominous grey clouds hanging menacingly in the air.

The first section of the walk is on a tarmac road up to Mauldslie farm, lining the side of which are a variety of picturesque trees. 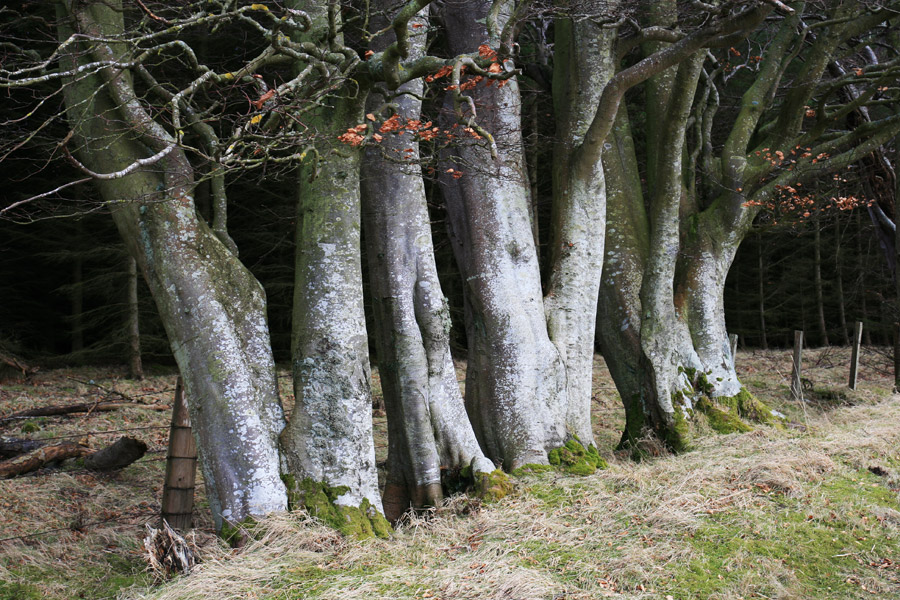 The road climbs slightly, which gave us a view west over the reservoir. Formerly known as Moorfoot Loch, it is the largest body of freshwater in the Lothians, and was dammed and turned into a reservoir around 1878, to supply Edinburgh with fresh drinking water.

After passing Mauldslie we followed a track cutting south-west across a field, reaching a cross roads of farm and estate tracks. We took the track to the right, which heads north-west towards Huntley Cot before curving around to the north of the buildings there.

The track continued to curve, crossing the River South Esk before turning north towards Moorfoot farm, with views across the river’s flood plain beyond to the hills from which it flows.

Moorfoot has an interesting history, the lands being granted to the monks of Newbattle Abbey by David I in the 12th century, who built a grange here.

Passing through the farm, a track leads up into the Moorfoot Hills, and Hirendean Castle finally came into view.

The track up from Moorfoot farm to Hirendean Castle roughly follows the line of the River South Esk, which twists its way down from the hills beyond.

As we approached a field boundary, we saw a line of old snow that had frozen after drifting up against the wall. 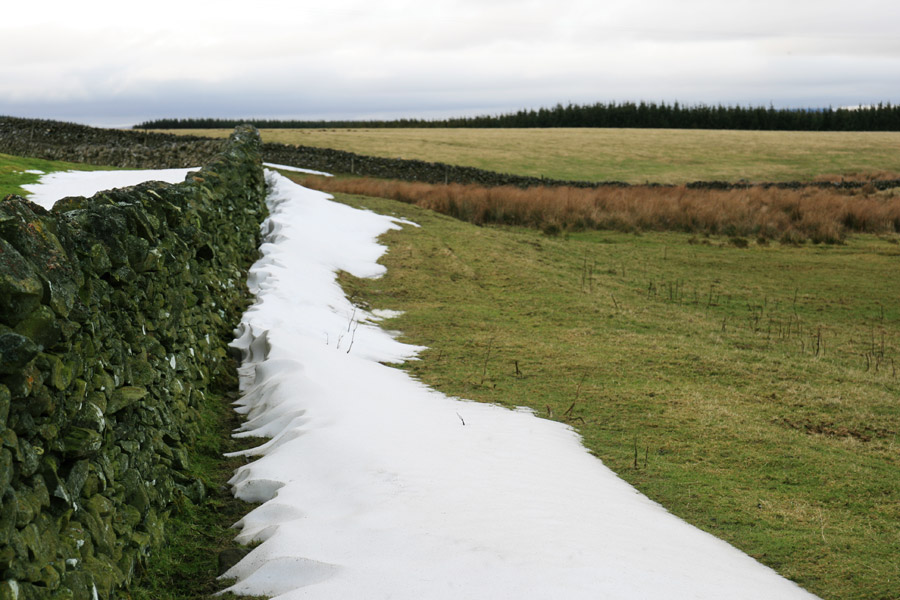 Just as we approached the castle the clouds parted and gave us a blue sky backdrop.

Built in the 16th century, much of the castle has now fallen, with just one wall and an attached corner still standing. Some details can still be seen, including what appears to be the carved surround of a door into the basement.

Hirendean Castle stands on a flattened mound beside the steep edges of the Hirenden Burn.

At some point in history a large chunk of masonry has evidently fallen off the castle and rolled down towards the burn.

The south wall of the castle is the only one of which a significant part still exists, standing to first floor height, with a section of the west gable attached.

Looking inside the castle, part of the old vaulting for the basement can be seen, as well as a beam hole indicating that the basement was split into two levels.

Climbing up behind the castle shows what commanding views it has, looking north-west towards the Pentland Hills, with Arthur’s Seat just visible on the horizon to the north. It also reveals the various lumps and bumps in the ground behind the castle, which probably represent the footings of ancillary buildings.

Slightly lower down the hill from Hirendean Castle is an old sheep fold. 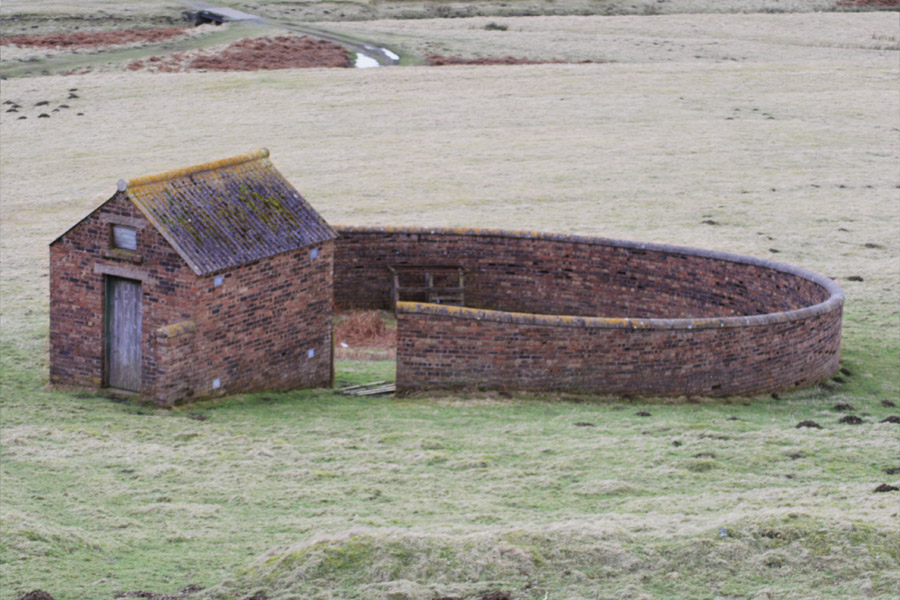 With the sun starting to get low in the sky, we made our way back down the hill towards Moorfoot farm, stopping to take a picture looking back towards the castle.

Passing through the farm, we saw a flock of golden sheep waiting expectantly for the farmer to deliver their evening meal. 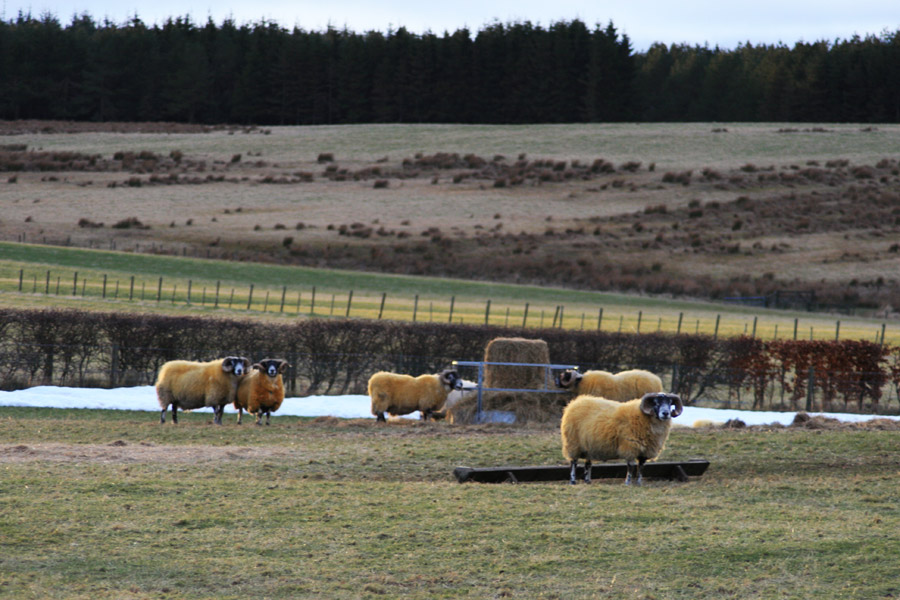 The setting sun bathed the landscape in red and golden hues, lighting up a row of trees by the side of the road. 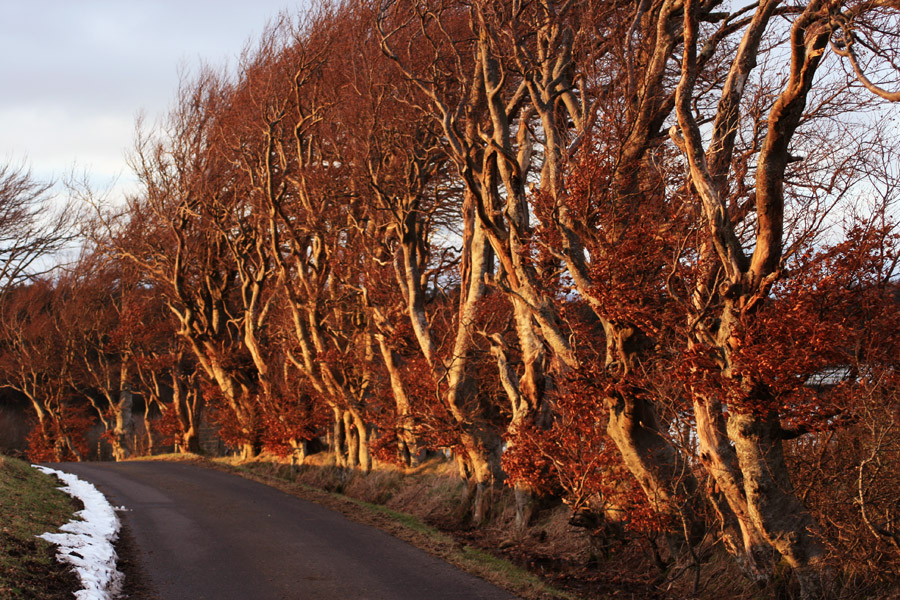 It was then a race against time to get back around the west side of the reservoir to the car before the onset of darkness, which wasn’t helped by the need to stop and take photos as we went!

After a bit of a rush, we made it back to the car as darkness fell, then headed back to Edinburgh where we had booked the Circle Café for dinner. What a treat that was!