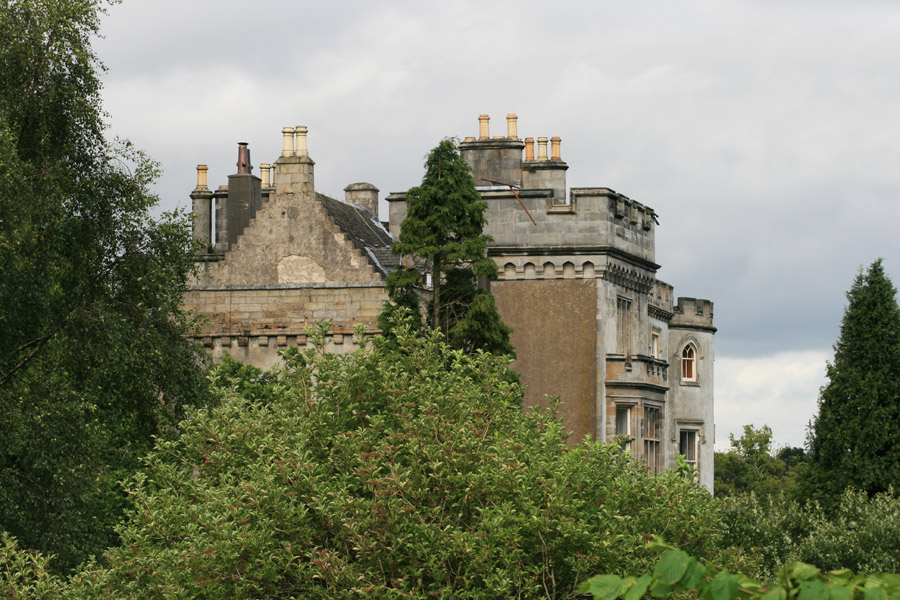 Crossbasket Castle was built in the early 16th century as a tower house, although a Victorian mansion house has since been added.

The lands of Crossbasket first appear on record as owned by the Hamiltons of Cadzow in the 14th century, and remained in the possession of the Hamiltons until 1440 when they were acquired by Alexander Lindsay. When the first castle was built on the site is not known, but a tower house was built by the Lindsays, probably in the 16th century, and was used as a jointure or dower house while their main residence was at Mains Castle.

The design of the tower is very similar in design to that of Mains Castle, which is thought to have been built in the late 15th or early 16th centuries.

Crossbasket’s tower measures around 11.6m long by 6.7m wide, rising to a height of 16.5m, and consists of a vaulted ground floor level, above which are a further two floors. It originally stood on a mound on top of a rocky crag, although this is no longer obvious as the level of the gardens has been raised. The remains of a courtyard wall can apparently be seen at the western edge of the crag.

On the roof is a parapet walk and a garret. At the south-east corner of the parapet is a square caphouse presumably at the head of the original stairway.

Both Crossbasket and Mains were sold by Alexander Lindsay of Mains and Dunrod in 1619, apparently to pay off large debts he ran up through an extravagant lifestyle.

The Peter family owned the castle throughout the 18th century, before selling it to Charles Macintosh, the inventor of waterproof fabrics, in 1818. Macintosh in turn sold the property to a businessman, Alexander Downie, who sold it to an insurance agent, John Cabbell. Cabbell sold it to a farmer and landowner, Robert Clark, in 1852 and his son, James Clark, was responsible for extending and modernising the castle early in the second half of the 19th century.

It remained in the Clark family until they sold it to a George Neilson in 1891 who made further additions to the property twice during his tenure. In 1919 he sold it to Thomas Dunlop Findlay of the East India Company, who owned it until 1932 when it was sold to James Little. Around 1945 Little transferred the ownership of Crossbasket to the J. Little Trust and the castle was used as a children’s home.

From 1963 until 1976 it was owned by the Roosevelt Memorial Fund and operated as the James Little College further education centre. Between 1981 and 2004 it was a religious centre before being sold to the property developer Langvale Homes who planned to convert it into apartments but leased it to a children’s nursery while they sought planning permission.

Langavle Homes entered administration in 2008 and the property was marketed for sale by the liquidators, KPMG, until it was bought by Steve and Alison Reid-Timoney in 2011. The Reid-Timoneys set about renovating Crossbasket Castle and converting it into a luxury hotel which is due to open in May 2016.

Where is Crossbasket Castle?

Crossbasket Castle is in the parish of East Kilbride and the county of Lanarkshire.

bed and breakfastCambuslang
5.1km away