We were up bright and early this morning, getting ourselves ready for the day ahead. We went next door to the main house for a big breakfast, then got ourselves ready and headed out into the sunshine. There wasn’t a cloud in the sky and it was already incredibly hot at 10am. 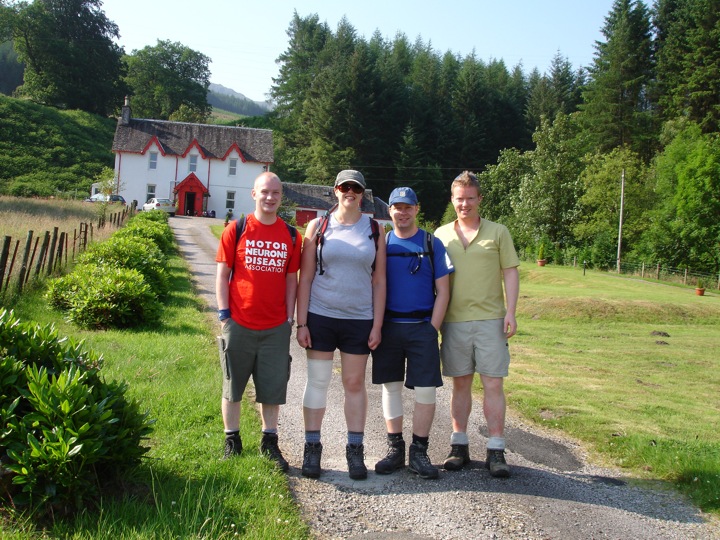 We set off along the road into the village, stopping at the village store for some supplies, then followed the main A82 road to the path that leads back up to where we had left off last night. Back on track, we followed the path as it undulated considerably through the forest.

Unfortunately the path here is quite open despite the trees, offering little protection from the fierce sun. The weather did create an amazing view along the River Fillan towards Glen Dochart, so we stopped to take photos. 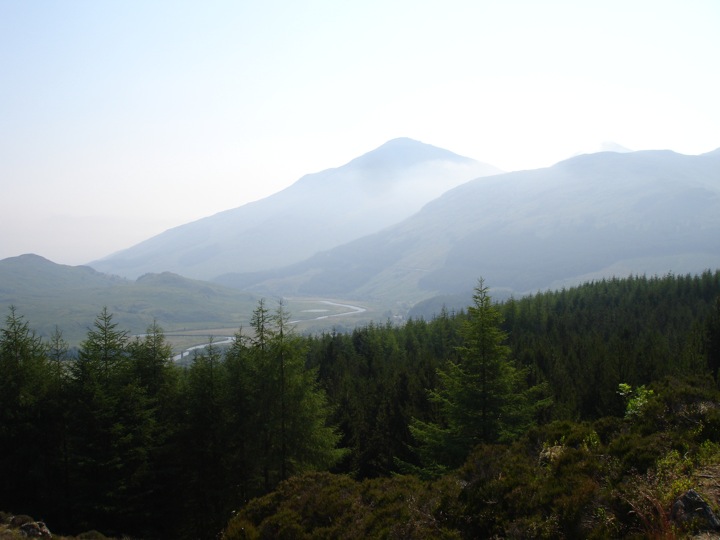 This section through the forest is only around 4km, but takes a long time due to the steepness (both up and down) of parts of it. Eventually we found ourselves on a long descent down to the railway, where we stopped for an energy bar and juice break. My brother Alex ‘phoned at this point to say that he and his girlfriend Karla were going climbing in Glencoe later today, and asked if any of us needed anything brought up.

My legs were in a pretty bad way again with an aggravated heat rash – nothing compared to last year, but still painful and annoying. Mark had ‘phoned his dad (a pharmacist) who suggested hydrocortisone cream as a cure, so Alex was dispatched to Boots to get some, and would meet us at the Green Welly Stop in Tyndrum this afternoon. We passed under the railway viaduct and over the main road, and crossed the wooden bridge over the River Fillan. 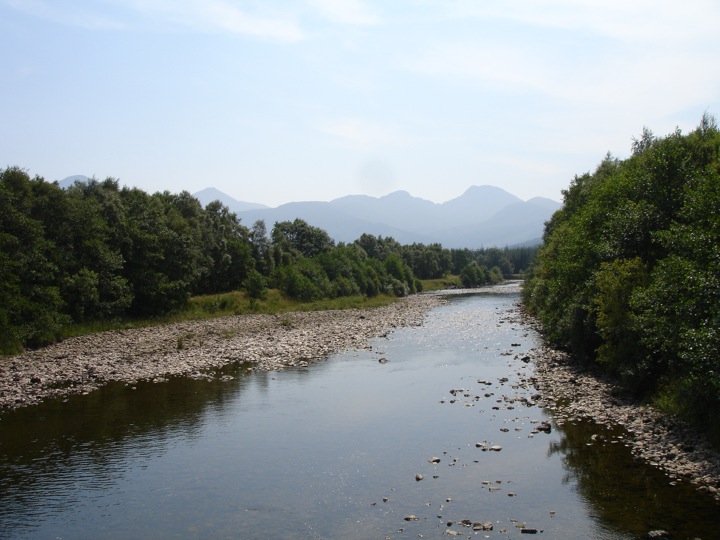 The track here is a tarmac road running past St Fillan’s church to Kirkton and Auchtertyre farms, crossing the Allt Auchtertyre to the main road. After crossing the main road we joined a wide rough track following the Crom Allt up past some old lead works to Tyndrum and the Green Welly Stop. We stopped here for several hours in the shade as the sun was unbearably hot now, the temperature reaching the predicted 32 degrees celcius. As well as doing a lot of eating, we were waiting for Alex and Karla to deliver the now much-needed hydrocortisone cream.

I bought some factor 45 suncream while I was waiting as my red neck said the factor 30 wasn’t up to the job. When Alex and Karla arrived I put some hydrocortisone cream on and we headed out into the sun once more, having arranged to meet them for dinner at the Bridge of Orchy Hotel. The sun wasn’t quite as hot now as when we had first stopped at the Green Welly Stop some 4 hours ago, but it was still pretty hot. We set off on the climb up from Tyndrum and along the edge of Beinn Odhar, with the distinctive pointed peak of Beinn Dórain rising ahead. 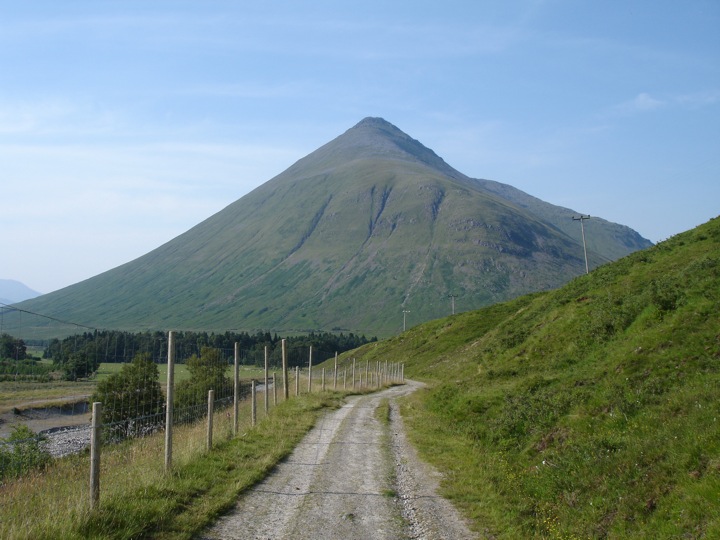 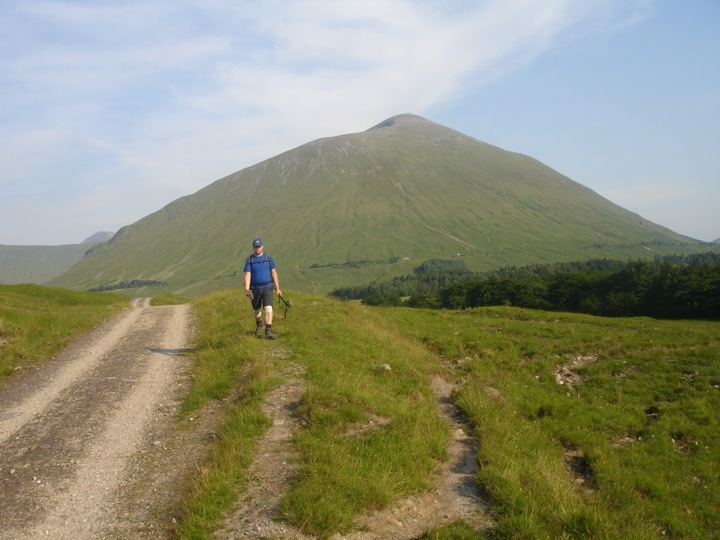 The farmer was herding sheep just ahead of us, so we stopped for a break until the sheep were off the track. 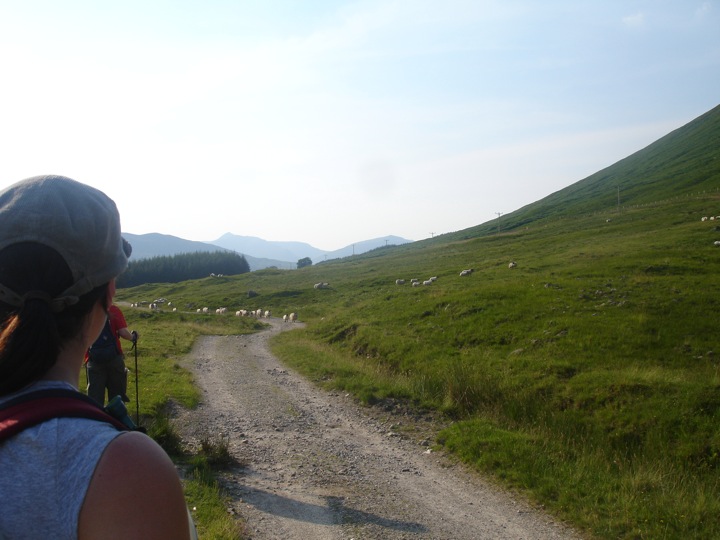 About halfway along the base of Beinn Dórain the track crosses the railway, with views back to Beinn Odhar. 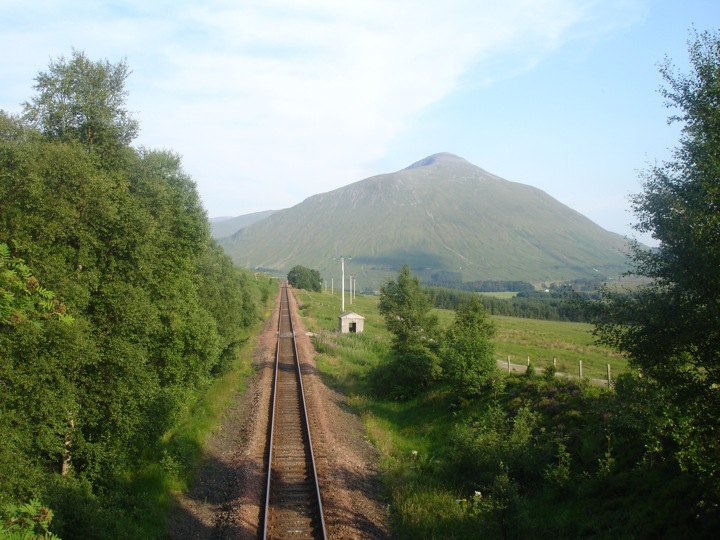 On the railway bridge were lots of thistles. 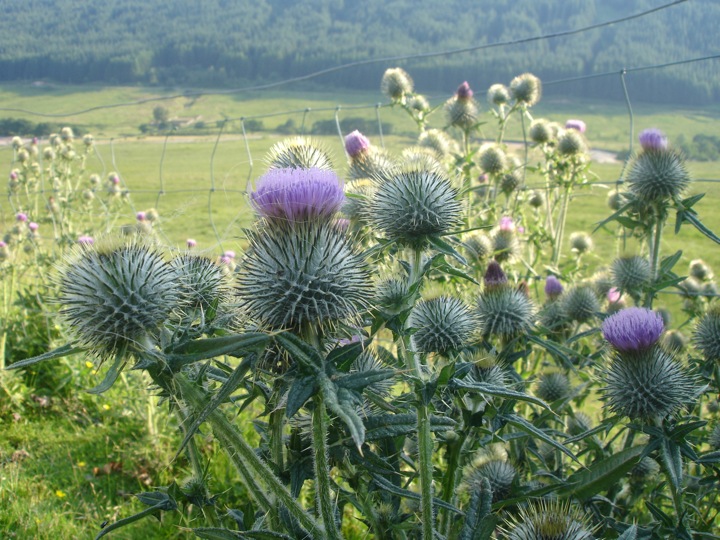 After that it was the last push on down to the The Bridge of Orchy Hotel, arriving just before the kitchen closed. Alex and Karla were already there and had got a table for us out on the balcony, where we watched the sun going down over the hills as we ate a fantastic meal and sunk a few ales. 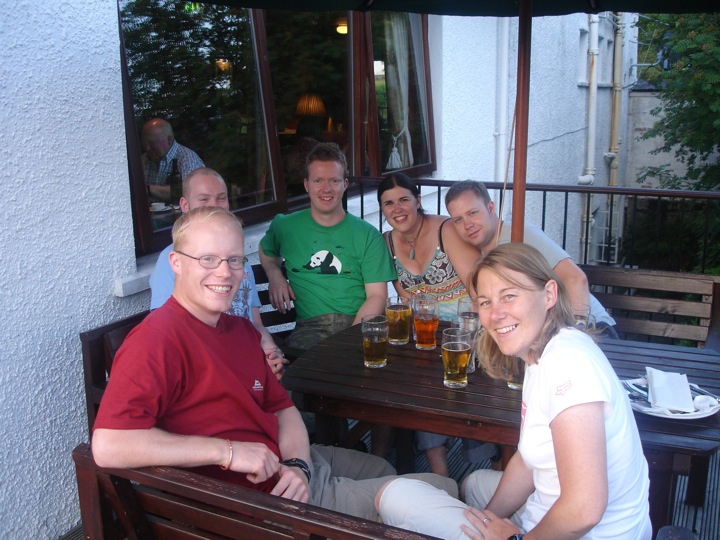 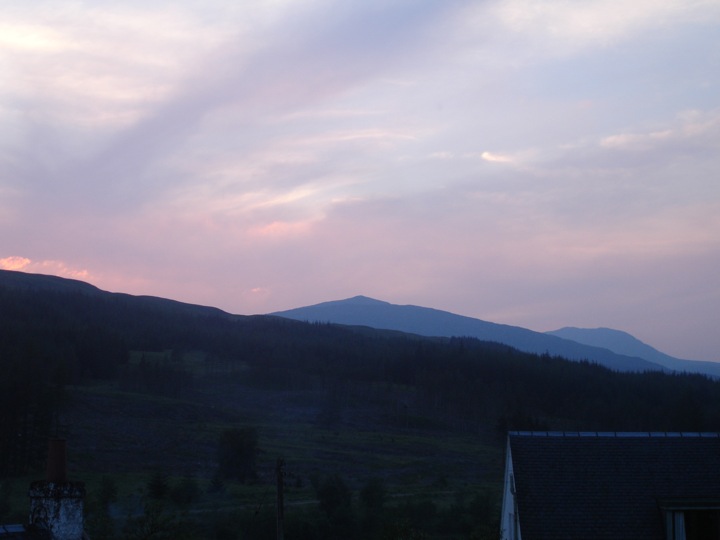