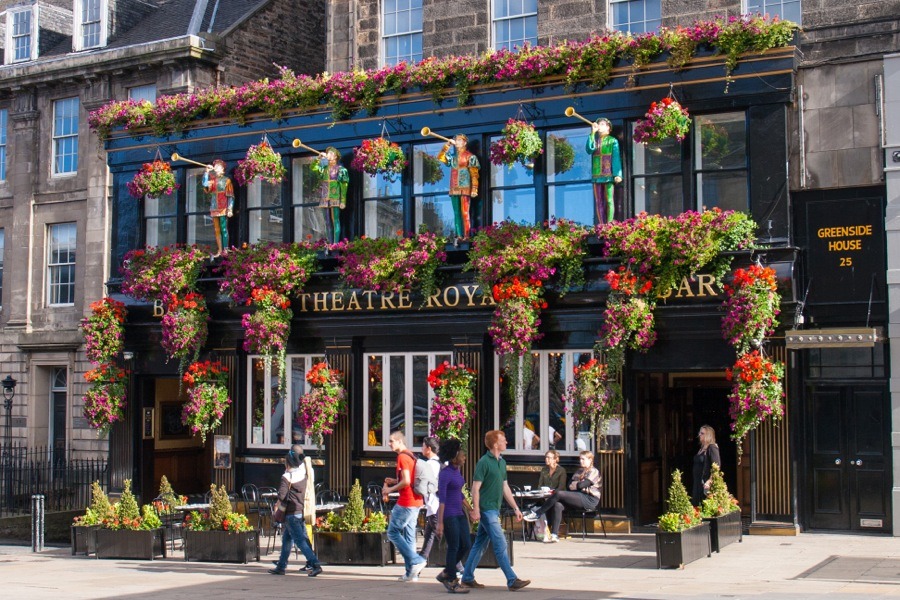 After a week in which Autumn well and truly arrived in Scotland, this weekend we experienced a slight Indian Summer which inspired us to go for a walk in Holyrood Park.

So we set off from home under blue skies and fluffy white clouds, with a gentle warmth banishing the chills of the previous few days. We made our way up Broughton Street, along Picardy Place and across the top of Leith Walk where the façade of the Theatre Bar was adorned with bright blooms.

Turning east onto London Road we walked along the bottom of the Royal Terrace Gardens, designed by the celebrated architect William Playfair in 1819. Nestled within the gardens is the delightful-looking Gardener’s Cottage, also built by Playfair, which now houses a small restaurant specialising seasonal, local produce. 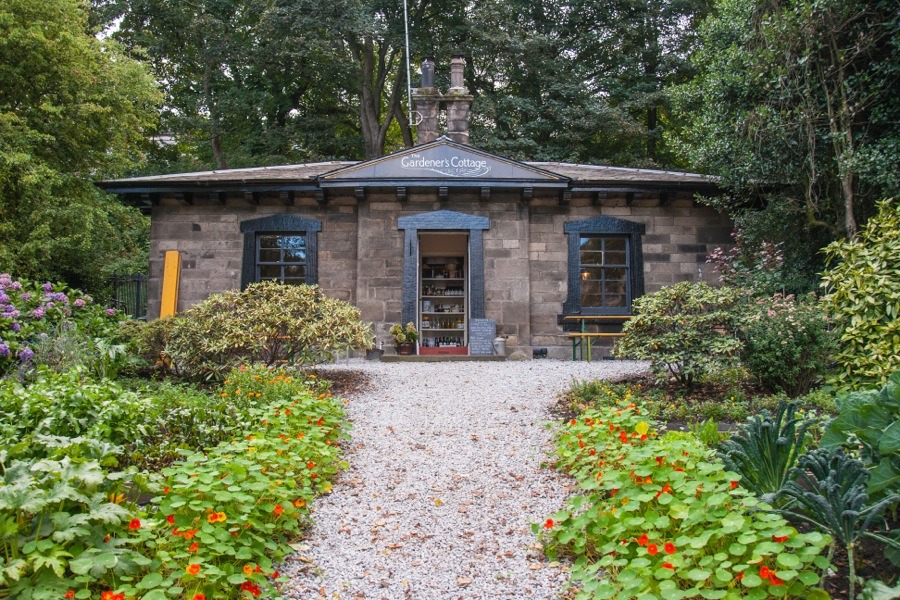 Their evening set menus are a bit meaty for us vegetarians, but we may have to try lunch here one day. A tree-lined path follows London Road until its junction with Easter Road. 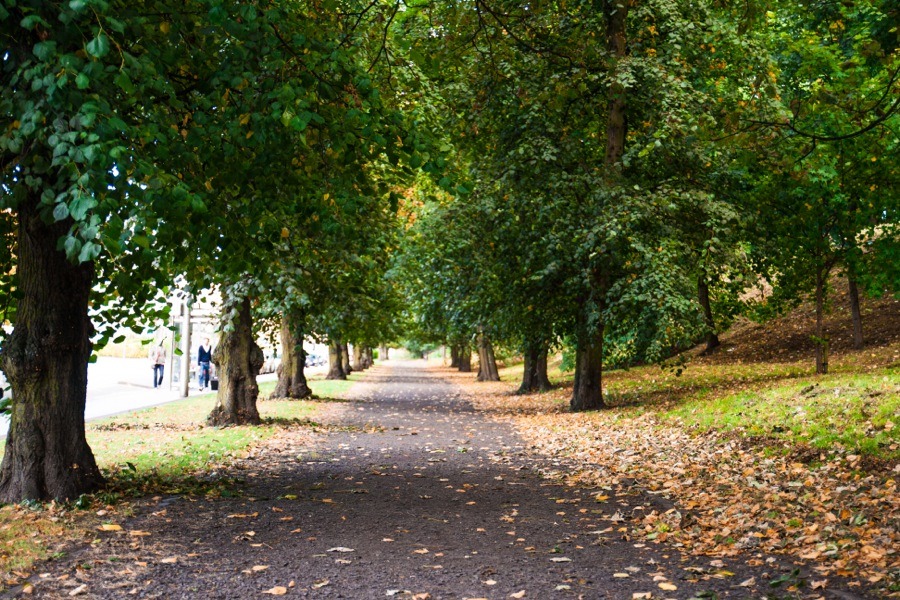 While the majority of Easter Road leads down to Leith Links, a short spur twists its way up to the junction with Regent Road before descending Abbeymount. Just before Abbeymount becomes Abbeyhill a path leads under the railway to Croft an Righ, a 16th century laird’s house thought to have been built for James Stewart, the Earl of Moray and illegitimate half brother of Mary Queen of Scots. I’ve taken photos of this building before, so today I just took advantage of the good light to take a photo of a carved detail over a the entrance to Croft-an-Righ Cottage opposite it.

This alleyway, also named Croft an Righ, runs along the east wall of Palace of Holyroodhouse before opening out into the vast green expanse of Holyrood Park, with the mighty peak of Arthur’s Seat providing a dramatic backdrop.

We walked along Queen’s Drive to the east until we reached St Margaret’s Loch, with the picturesque ruins of St Anthony’s Chapel standing on a rocky outcrop above it.

Following Queen’s Drive as it curves around the eastern slopes of Arthur’s Seat we eventually came to Dunsapie Loch, nestled between the two ancient forts of Dunsapie and Arthur’s Seat itself.

Dunsapie is a much smaller fort, located on a rocky outcrop to the east of Arthur’s Seat.

At this point we were considering climbing Arthur’s Seat, however having done that several times before but never having climbed Dunsapie we decided to opt for the more relaxed option, and passed the bottom of the steep path up Arthur’s Seat.

We continued around Dunsapie Loch, as the easiest access to the summit is from the east end.

A steep and narrow path leads up the rocky cliffs at the eastern end, showing why this made a good defensive site.

Once up on the top, the views were stunning. While Arthur’s Seat boasts 360 degree views and blocks the views to the west and north-west from Dunsapie, it’s smaller neighbour shares the views over Edinburgh to the south.

At the southern end of the plateau the scant remains of a boundary wall can just about be made out.

There is of course a great view of Arthur’s Seat from Dunsapie.

Although it lacks the height of its neighbour, Dunsapie is still sufficiently elevated to command a wide vista stretching from the Lomonds in Fife to the north over the Forth and Inchkeith to the Bass Rock, North Berwick Law and Traprain Law to the east then south-west to the Pentlands.

There were a lot of people evidently more energetic than us today, as Arthur’s Seat was covered with the distant figures of people climbing to the summit.

After spending a while taking photographs and sketching, we made our way back down to the road and continued along Queen’s Drive which curves its way around the southern edge of Arthur’s Seat. In front of us, sitting on the railings tucking into what looked like a caterpillar, was a crow.

The road twists and turns its way, following the topography as it clings to the slope.

Although we were now lower down than when on Dunsapie you are still higher than the majority of Edinburgh at this point, and there are good views south over the city. Just at the bottom of the hill is Prestonfield, a 17th century house now converted into a luxury hotel, and its distinctive circular stable block, now a restaurant. 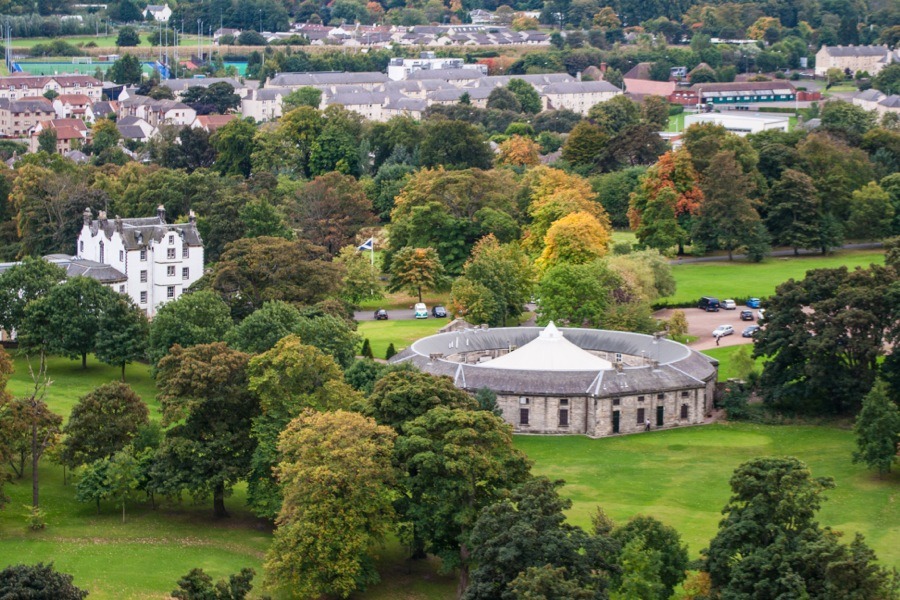 As the afternoon progressed the blue skies and white clouds had been replaced by a more overcast blanket of grey cloud, but the sun was still managing to find its way through.

As we rounded the bottom of Arthur’s Seat Edinburgh Castle came into view.

A bit further still and the dramatic cliffs of the Salisbury Crags appeared before, rising at a sharp angle from the western flanks of Arthur’s Seat.

There are some steps leading up from the road near here, but anyone starting from this point has a long and steep climb.

Eventually we made it all the way around Holyrood Park, which brought us to the Scottish Parliament. 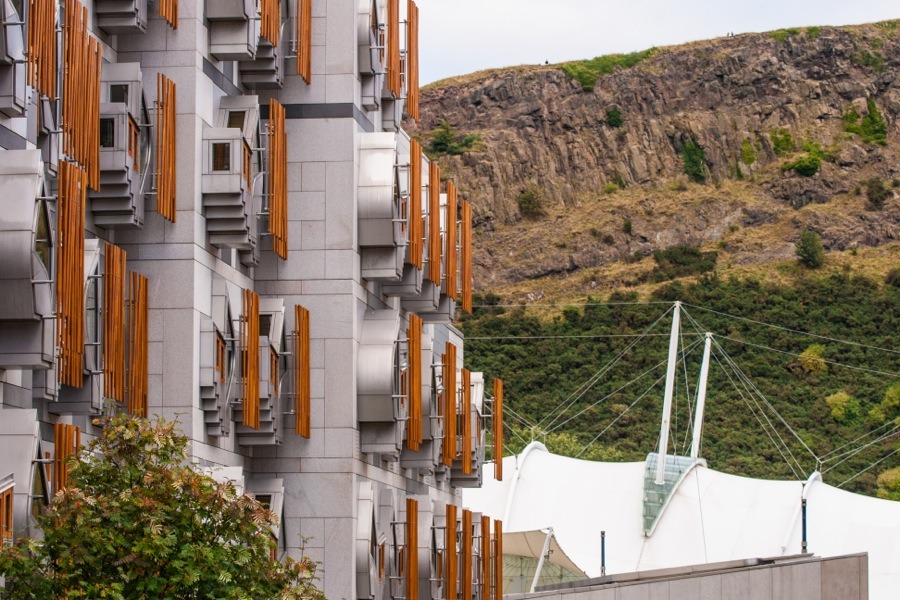 Beyond the Parliament building at the junction of the Canongate and Abbeyhill there’s a view up Calton Road to the Old Calton Burial Ground.

We continued along Abbeyhill, pausing at the corner of the Palace of Holyroodhouse‘s land where there’s an intriguing little building known as Queen Mary’s Bathhouse. Looking like a miniature castle, it was once reputed to have been the bathhouse of Mary Queen of Scots but is now thought to be a 16th century garden pavilion. 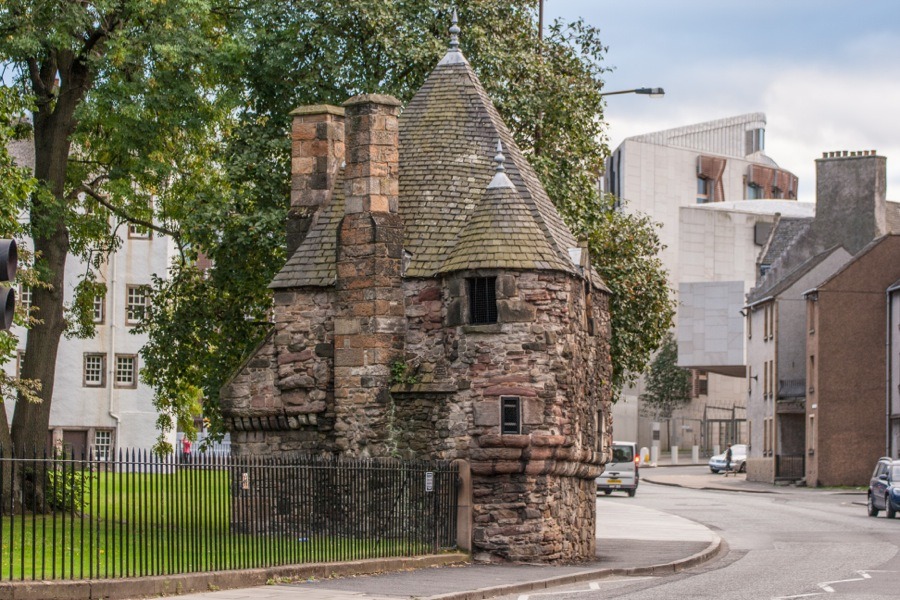 From there we retraced our steps back up Abbeyhill and along London Road to home.