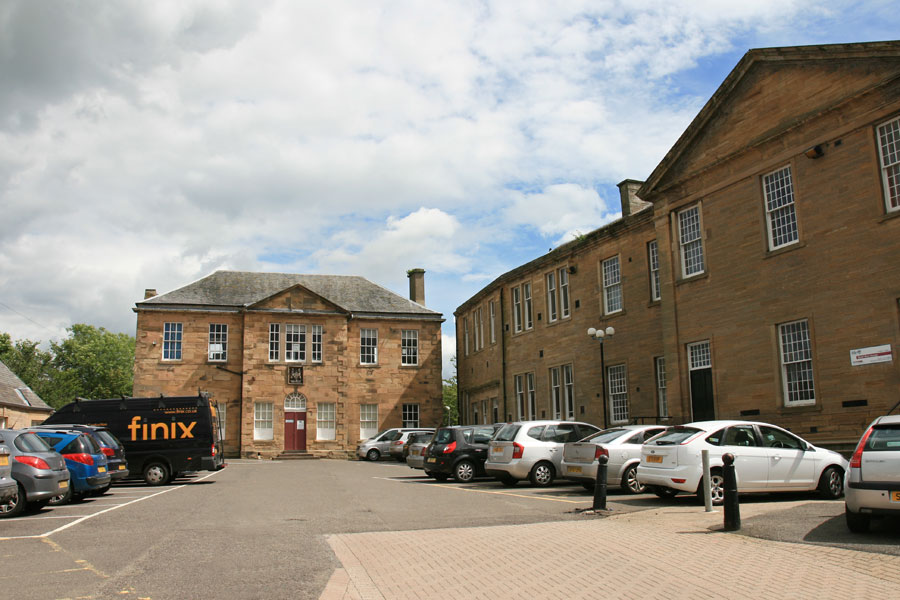 With good weather promised today, we headed north over the Forth Road Bridge into Fife, on our way to St Andrews.

We stopped for lunch in Cupar, and while there sought out the site of Cupar Castle, which has long since disappeared. Originally built in the 11th century, nothing now remains of it, and the site is occupied by 19th century buildings.

The earliest building on the site, now known as the Castlehill Centre, is that in the middle of the photograph, which was built in 1806 as Cupar Academy.

Over the door is a much older carved armorial panel, which was taken from the old Tolbooth when it was demolished in 1813. 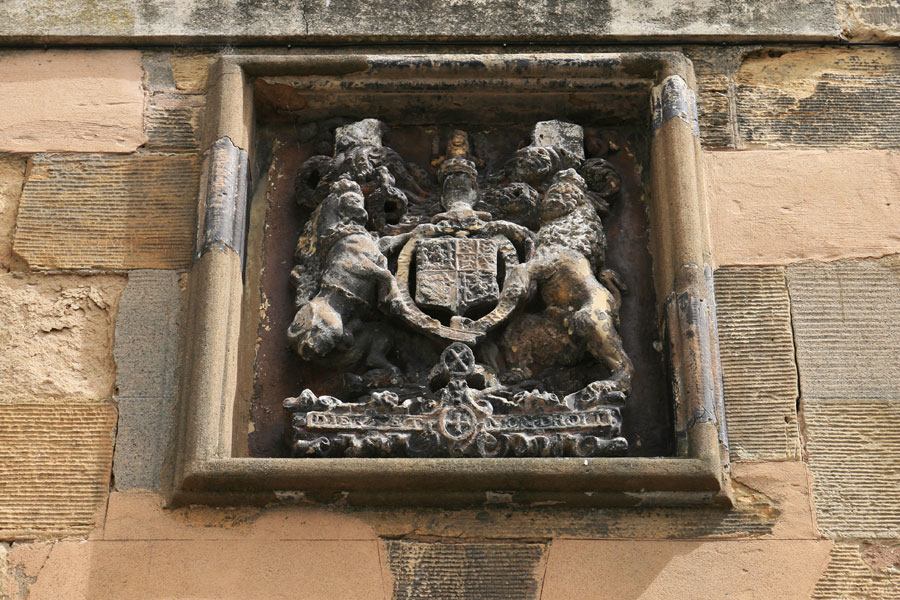 Continuing our way eastwards through Fife, we stopped briefly at Dairsie Castle. The first castle here was built in the late 13th century by the Bishop of St Andrews, and was later rebuilt and extended in the 16th century.

By the 19th century it was in ruins, with just two of the four walls still standing. During the 1990s it was lovingly restored and is now rented out as self-catering accommodation.

Eventually we made it to St Andrews, parked the car, and set off on foot for St Andrews Castle.

The castle is entered via a visitor centre, within which are various artefacts found during archaeological excavations on the site, including intricately-carved crosses featuring Celtic knotwork. 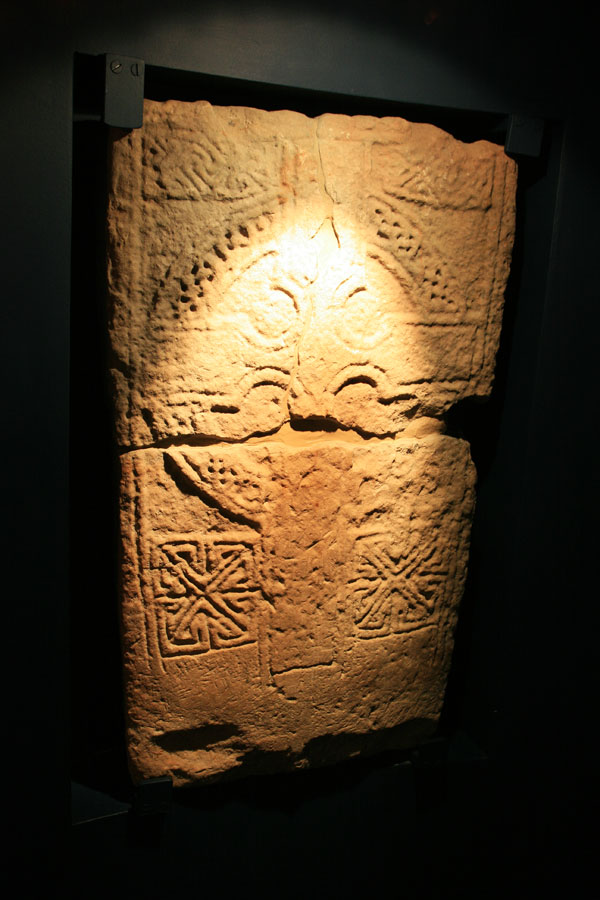 Built in a cliff-top position around 1200 by the Bishop of St Andrews, Roger de Beaumont, the castle evolved over the centuries into a large courtyard castle, with ranges of buildings arranged around the courtyard wall, as shown on an information board.

At the south edge of the site is a massive rectangular tower house, known as the Fore Tower, which was probably built by Bishop Walter Trail around 1400.

This once contained the main entrance into the castle, evidence of which can be seen in the form of large vertical holes towards the bottom of the tower, which originally held the mechanisms for a drawbridge over the ditch.

During the Scottish Reformation of the 16th century St Andrews Castle was occupied by Protestants, and laid siege to by those loyal to the then Regent, James Hamilton the 2nd Earl of Arran. In 1546 the attackers begun digging a tunnel, cut through solid rock, under the aforementioned tower. The entrance to the tunnel can be seen next to the tower in the photo below.

Adjoining the tower is a later block of buildings, a two storey range which would have comprised of the Archbishop’s principle lodgings over a new entrance gate. This was added by Archbishop John Hamilton after the end of the siege, and is known as The Hamilton Façade.

From his new apartments the Archbishop would have been able to look out over the courtyard within.

Just off-centre in the courtyard is a well, sunk into the rock below. Either side of the old tower and the new range were large round towers, both of which have now largely been removed.

At the northern edge of the site, perched right on the cliff top, are the remains of a long block of ancillary buildings or accommodation, at the end of which is the Kitchen Tower.

Exposed to the elements and the worst that the North Sea can throw at it, the stonework here has suffered considerably in places from erosion.

Looking into the castle‘s interior from the Kitchen Tower, you appreciate how precarious a position the castle occupies, with a sheer drop down to the beach known as Castle Sands below. The sea wall was built in 1886 to stop any more of the castle from collapsing into the sea.

Leaving the castle‘s courtyard and returning to the Fore Tower, the holes for the drawbridge can be clearly seen from the outside.

Above what would have been the entrance is an ornately-carved surround for a much-weathered armorial panel.

As mentioned before, close to the base of the Fore Tower is the entrance to the siege tunnel. Descending the steps leads you into a very cramped tunnel, which curves organically through the rock.

Further in the tunnel opens out a bit, allowing you to stand up, with rock-cut steps making it easier underfoot. I assume these steps were cut when the tunnel was rediscovered in 1879.

The tunnel continues for a surprisingly long way, descending into the dark depths of the rock.

It must have taken an enormous effort to dig the tunnel, such is the length and depth of it.

Towards the bottom the tunnel narrows again, and then stops, save for a small hole just big enough to squeeze through. Climbing a ladder takes you into a new chamber, which rather remarkably is the counter-mine – a second tunnel, cut by the defenders of the castle to intercept that of the invaders.

It’s almost impossible to imagine the effort required to dig a tunnel like this, and in such trying circumstances, as you ascend back towards the surface through the narrow channel.

Back above ground, we left the castle, and continued walking along The Scores towards St Andrews Cathedral, pausing to look across the wall at the Fore Tower.

Along the outer wall of the castle various colourful flowers were growing. Unfortunately my horticultural knowledge is rather lacking, so I don’t know what they’re called. 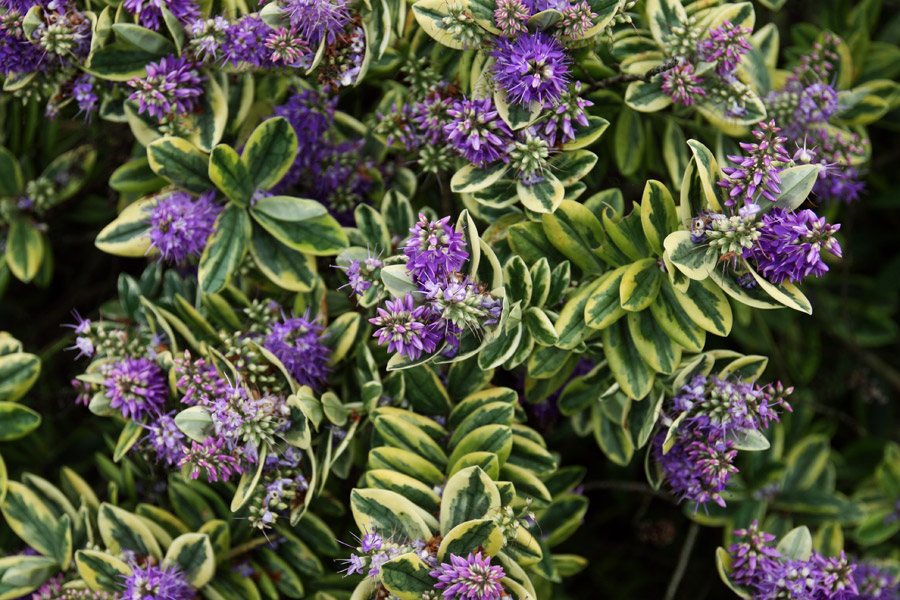 The view back towards the castle from here is a good one.

At the east end of St Andrews are the substantial remains of St Andrews Cathedral, the largest medieval church in Scotland and once the headquarters of the Scottish Church.

Begun in 1160 but not completed until 1318, the cathedral suffered greatly as a result of the Reformation. One of the largest sections still standing is the east gable of the presbytery, where the relics of St Andrew were kept.

Pre-dating the huge cathedral is the more modest St. Rule’s Tower, built in 1130.

The west wall of the cathedral’s nave still stands, and is decorated with Gothic arches.

Again, the coastal weather has taken its toll on the stonework, with weathering evident on the carvings.

To the west of the nave wall is the large open space of a cloister.

With the cloister wall and St. Rule’s Tower as a backdrop, it isn’t surprising that this is a popular place for wedding photos.

We left the Cathedral and made our way back into town, passing the Northpoint Café, apparently, apparently, Kate Middleton met Prince William for coffee. 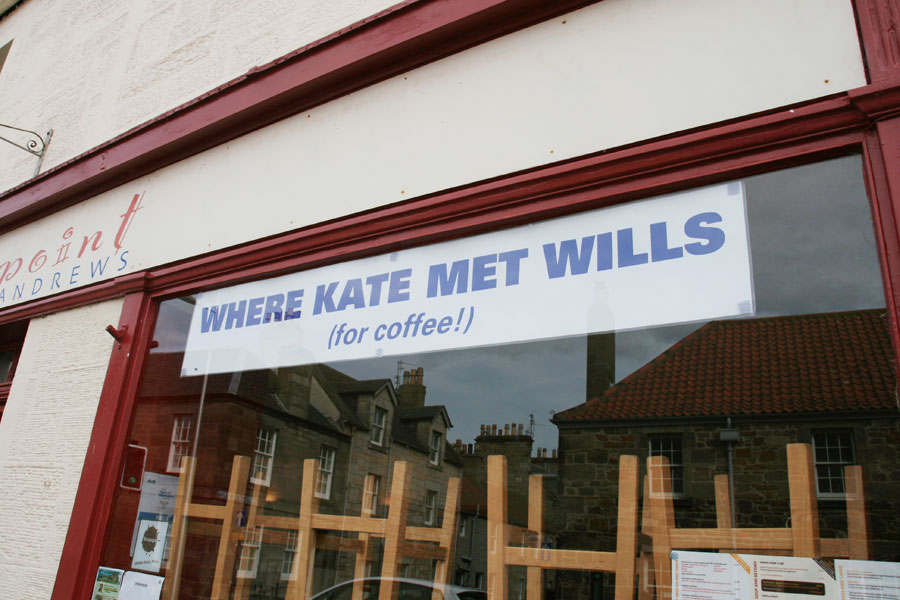 It was just past coffee time and most cafés seemed to be shut or shutting, so we opted for Zizzi where a Torta Amaretti proved the perfect accompaniment to our coffees.

Refreshed and replenished, we meandered our way through St Andrews on our way back to the car park, where, on the grass verge, we spotted a rabbit doing some pre-dinner stretches. 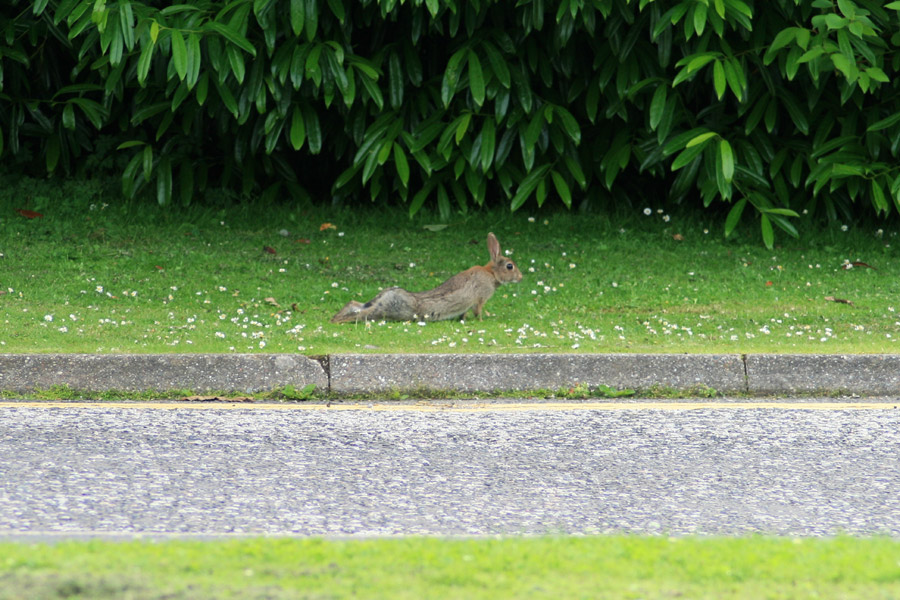