We were over in Glasgow this weekend, meeting up with friends last night for a mini pub crawl (taking in BrewDog Glasgow and The Finnieston) and dinner at The 78 Café Bar, a great bar with a fantastic atmosphere, serving vegan food and good ales.

Today we paid a flying visit to Pollok House and Country Park, slightly tight for time as we had to return a hire car in Edinburgh by 5pm.

Before we actually got to Pollok House, we stopped briefly to have a look at Haggs Castle. A 16th century tower house in Pollokshields, it was home to the Maxwell family before they built Pollok House, and is now a private residence.

It’s a long drive through Pollok Country Park to reach Pollok House, along a tree-lined driveway, passing cattle grazing in meadows. It was quite sunny, although there were intermittent showers of heavy rain, meaning a slightly strange light.

Pollok House stands resplendent on the banks of the White Cart, looking out over its old estate beyond.

Either side of the central arched staircase up to a terrace in front of the house were two banks of vibrant yellow large daisy-like flowers, their petals beaded with raindrops from an earlier shower. I’m no expert when it comes to flowers and plants, but I think they might have been “false sunflowers” (Heliopsis helianthoides var. scabra “Summer Nights”, apparently). 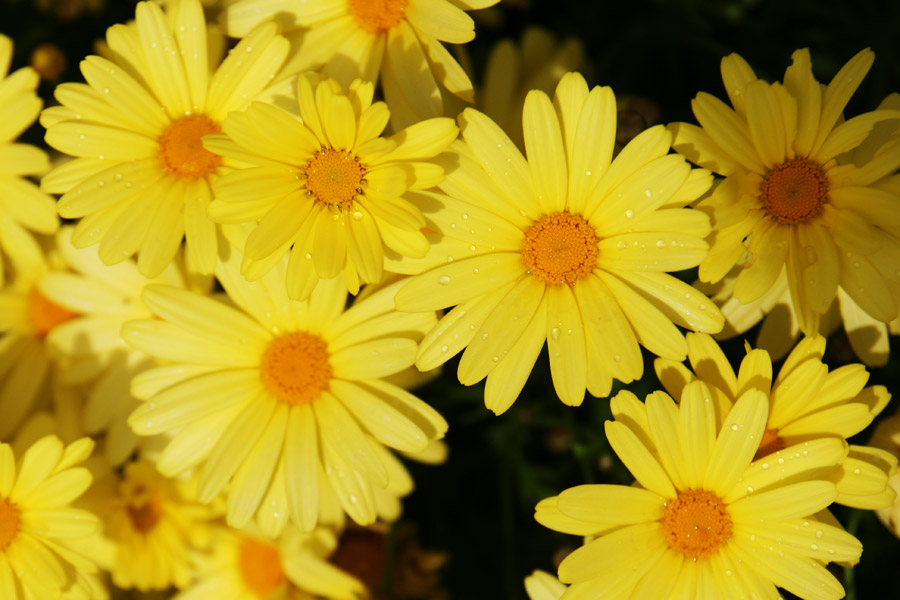 The terrace is flanked by a pair of ogee-roofed pavilions, with a staircase in each leading up onto the upper garden level.

Surrounding the house are beautifully-tended gardens, including a mini-maze created by miniature hedges.

With our stomachs rumbling by this point, and the rain starting to fall again, we made our way into Pollok House. But instead of climbing the stairs to view the house and museum, we descended into the old servants’ areas below, in search of The Kitchen Restaurant.

As its name suggests, this restaurant, serving a range of delicious food, is housed in the old kitchen, complete with arched ceilings and a massive cast iron range all along one wall.

The hunger abated, and the rain stopped, we made our way back out into the grounds, and walked along the edge of the river past an old estate bridge, built in 1757.

Further along the White Cart are Pollok House’s stables, which incorporate numerous details from earlier buildings. The stable courtyard is entered through a 17th century Renaissance arched gateway.

Above the gate is a carved armorial panel, although which coat of arms it displays I have yet to discover.

Either side of the gateway are gun loops, installed in what is obviously a later wall (probably 19th century).

Walking through the archway reveals a barrel vaulted ceiling, and what look like very old stone details along the walls.

Inserted into the north east inner wall of the 19th century stable block are several pediments which must have once been installed above the dormer windows of the Laighe Castle, an old predecessor to Pollok House.

They are carved with the initials “S I M” and “D G B”, presumably for a Sir John or Sir James Maxwell and his wife, although which exact persons the initials refer to I have yet to discover.

It;s likely that the gateway and gun loops also came from Laighe Castle, which would have been extended over the centuries. A section of wall from Laighe Castle still remains standing, incorporated into the outer eastern corner of the stable block.

With time becoming ever-pressing, we left the gardens and headed back to the car park, passing a pair of flowerbeds in the shape of yin and yang on the way.