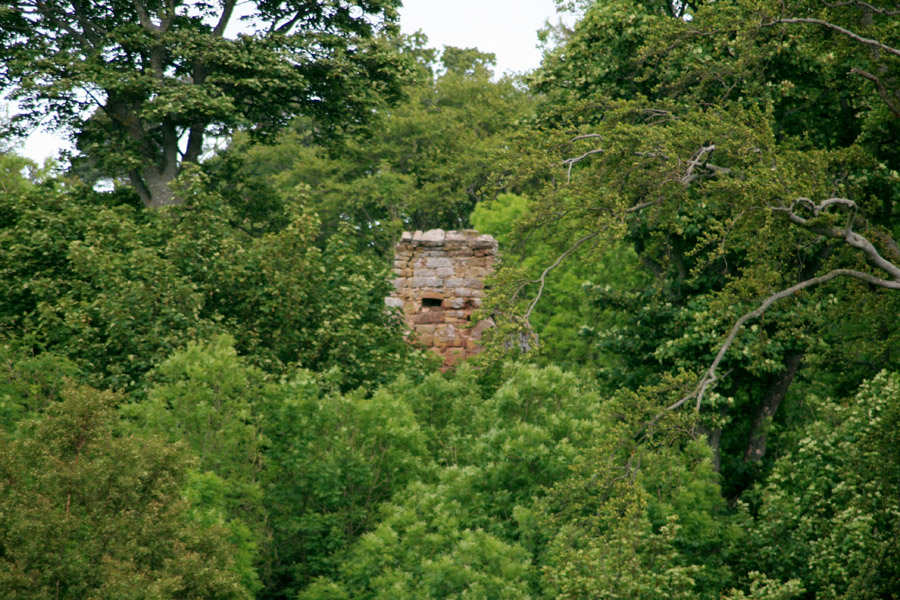 Yester Castle and the Goblin Ha’

Today we visited a place that I’ve wanted to visit for a long time, Yester Castle, a castle with a reputation for spookiness and strange goings-on.

Yester Castle was begun in the 13th century by Hugo de Giffard, the “Wizard of Yester”, who was reputed to be a warlock or necromancer. He is said to have made a pact with the Devil and raised an army of goblins who built him a subterranean chamber where he could practice his dark arts. But more that later.

I had read in various places that it was quite a difficult site to find, with some people suggesting entering the Yester estate from the west at Gifford, and others preferring to enter by Danskine Lodge to the east. In both cases there was talk of people losing their way and others not finding the castle. But looking at the map Yester Castle is situated in the corner of a wood bordering a golf course, so that seemed like the most sensible option, and proved to be very easy.

We parked at Castle Park Golf Club, and asked if it would be ok to walk along the edge of the course to get to the castle. “Of course” was the reply, and the guy gave us clear directions of how to get there. As we got closer, we could see a bit of masonry poking through the trees.

But this only hinted at what we were going to see! Our route took us right to the old bridge that crosses into the castle’s outer defences. The bridge is carved with the date 1717, but is apparently much older. It leads straight into a long, wide ditch which was cut to protect this, the south end of the castle site. It was full of nettles, which looked rather glorious in the late afternoon sunshine. 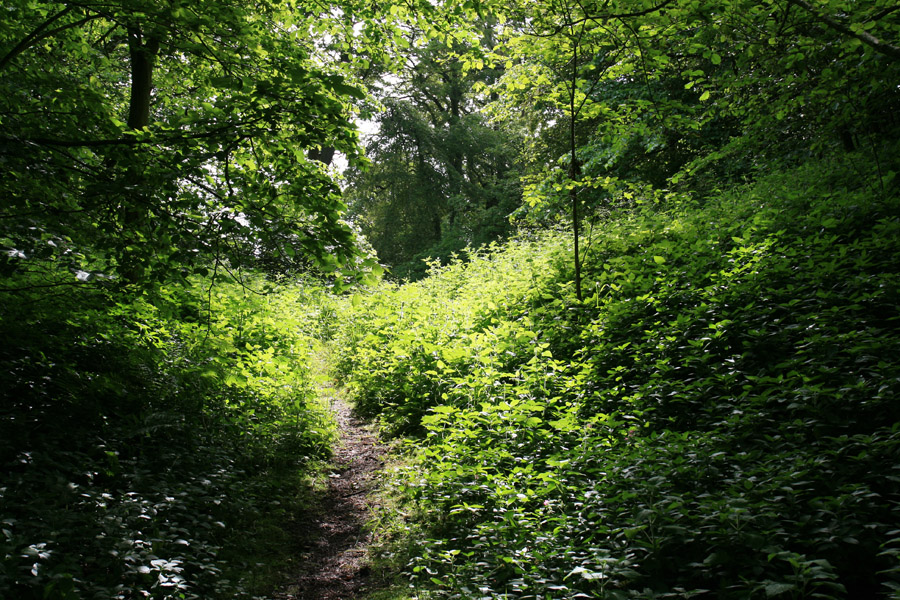 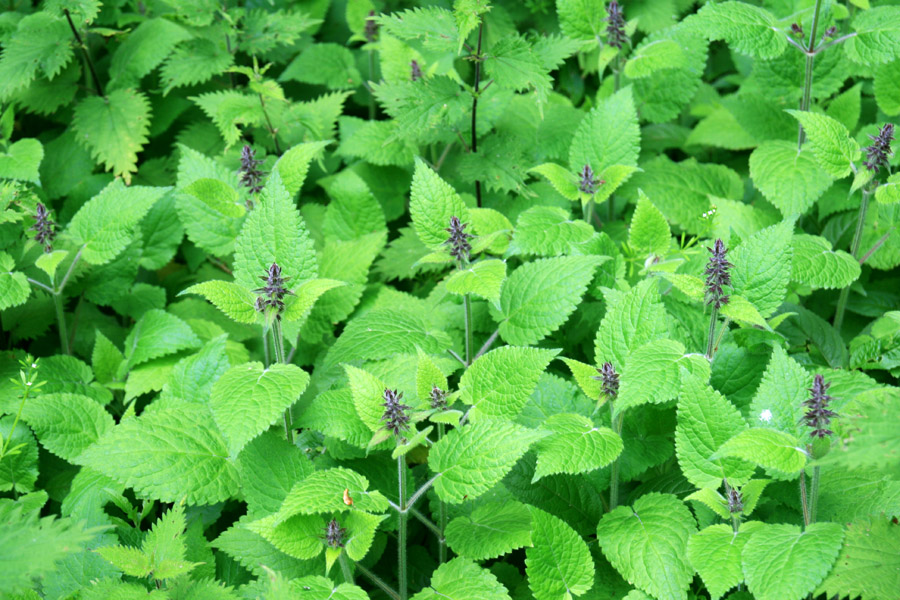 Halfway through the ditch a path leads up a bank to what would originally have been the main entrance to the castle. Nothing now remains above ground, but there were once a pair of large round towers flanking the gateway.

In front of us were the substantial remains of a 15th century tower house, partly hidden by trees.

This tower was built against the inside of an enceinte, or courtyard wall, and it was the top of this that we could see from the golf course, emerging from the canopy. The tower originally consisted of three storeys above a barrel vaulted basement, which has survived.

After having a good look around this tower, we set off to find the Goblin Ha’. This whole area was planted with trees in the 19th century by the Marquess of Tweeddale, and it is now quite overgrown, making it quite easy to lose your bearings. The trees also hide the various ruins very well, and it was with some surprise that we came across a 9 metre tall section of the castle walls!

It was well hidden by the trees, and despite having only been maybe 30 metres from it at the tower, we didn’t see it until we were up close. Most of the references I had read prior to visiting focused on the Goblin Ha’, so I wasn’t expecting such large ruins to remain. Because the castle is built on a raised promontory with small burns to the east and west, the land falls away steeply at the sides, and the courtyard wall extends down another 3 metres or so making it around 12 metres tall at this point.

Built into the bottom of this massive 15th century wall, in a dip in the land, are a pair of arched entrances into the Goblin Ha’, although they are now blocked with iron grilles.

We knew there was another entrance from the side, but we weren’t sure exactly where. So we passed through the archway in the big wall and made our way to the west edge of the castle mound, where a narrow path clinging to the edge of the slope led us to a tiny arched doorway far below the castle.

Crouching and entering leads you into a long passageway cut through the rock, and lined with a series of stone arches that get progressively taller. This is a photo looking back along the passage to the entrance.

The passageway brings you into an incredibly dark chamber, almost pitch black at first as the eyes adjust, despite the twin arched entrances in the south wall.

I was glad I’d brought my tripod, but even more glad that I’d brought my powerful bike light, as it was really quite difficult to see what was in there. It didn’t feel at all spooky, just empty, peaceful and quiet. But there is some danger to be found – opposite where we had entered is a stone-cut staircase which descends even deeper into the hill, and without the bike light we wouldn’t have seen it.

I started to carefully walk down the staircase, but after yesterday‘s rain the steps were covered in slippy mud, and I didn’t fancy slipping the rest of the way down, so gave up a few metres from the bottom.

Apparently there isn’t much to see, and the stones you can see at the bottom are there to fill in an old well which used to supply the castle with water. Contrary to what I expected, the overriding emotion down here was that this place is really cool, not spooky at all. Luckily it wasn’t until we got home that I found a video on YouTube of two guys scaring themselves silly down here when they thought they heard a voice! You can watch the video here.

The Goblin Ha’ is thought to have been built in the first half of the 13th century, and has an impressive Gothic arched ceiling. Considering its age it is in fantastic condition, although some masonry has fallen from a section low on the east wall, possibly due to fire damage by the looks of it.

At the top of the north wall is a fireplace, this chamber having originally been split into two levels, with crossbeams placed in between each of the roof arches.

This really is a fantastic place, and well worth a visit. We would have spent longer here, but time was marching on and we still had to walk back through the golf course and drive back to Edinburgh, so eventually we made our way back out into the daylight.

Before we left Yester Castle though we had another wander around, and noticed the footings of some buildings on the west of the castle mound. Upon later investigation these turned out to be the remains of 14th century buildings within the castle walls.

Re-tracing our steps through the wood and over the bridge, we were soon back on the golf course, and stopped to take a photo of an ominous looking cloud gathering over it.

It turns out that the crest of this hill was once the site of a fort, identified from aerial photographs.

As we walked back towards the clubhouse and car park, the rain started to fall, but we made it back just in time.