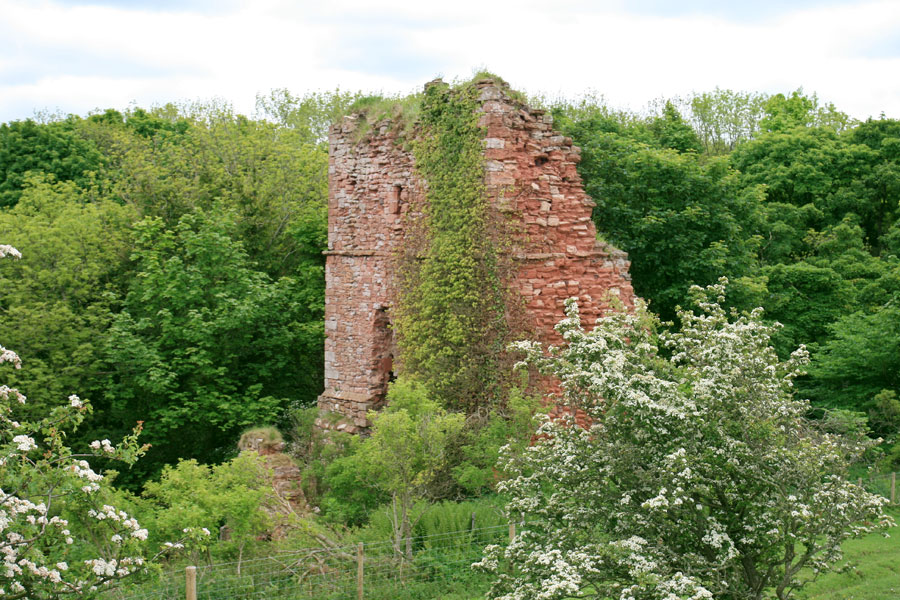 We headed east and south down the A1 today, aiming to have a quick look at a castle of which I didn’t think much remained, and then a visit to a picturesque harbour. As it happened, the castle turned out to be much more interesting than the harbour, and we spent much longer there.

I’d seen the top of Cockburnspath Tower poking through the trees beside the A1 several times before, but had always been on the way somewhere so had never stopped.

On record since the 11th century, it occupies a strategic position above a steep ravine, and was at the forefront of the Border disputes between Scotland and England for centuries. The current castle dates from the 15th century, and takes the form of a tall tower. Ruined since the late 18th century, it suffered a major collapse earlier this year, and a there’s a huge pile of rubble at its base.

To the south-east of the main tower, across what would once have been a courtyard, now very overgrown with nettles, is a rectangular block, the outer wall of which formed the outer wall of the courtyard. A doorway through the wall leads out onto a sleep slope, at the bottom of which is the Tower Burn.

This block was originally divided into three chambers with vaulted ceilings, a small section of which still survives.

Walking around the tower, we spotted an ornate arched doorway, now blocked up, in the north-east wall.

On this side the tower stands to almost its full height, which would have been four storeys plus a parapet walk.

Interestingly Cockburnspath Tower is overlooked by higher ground, and climbing up onto this plateau allows you to look straight across at the upper courses of stonework.

Unfortunately, as well suffering major collapses the walls of the castle are being eroded by the weather.

The whole area is heavily overgrown with trees and weeds, and stonework is being forced apart in places by trees growing within the fabric of the buildings.

This is particularly evident in the interior of the tower, where trees have sprouted up and matured, blocking the view of a particularly nice arched window.

We then walked through the doorway of the neighbouring block, and out onto the edge of the slope down to the burn. From inside this building, due to all the nettles and trees, it wasn’t clear how big it was. But on the outside it became clear just how substantial a size it is, stretching some 21 metres in length.

At regular intervals the walls are pierced by slit windows, below which are small holes which may be either drains or gun loops.

After picking our way through the nettles around the perimeter of this ancillary block, we headed back through the doorway for another look at the main tower.

Then made our way back across the Tower Burn on an old bridge known as Cromwell’s Bridge. Like the castle, it is also bathed in a sea of green, but with wild flowers adding a dash of colour. 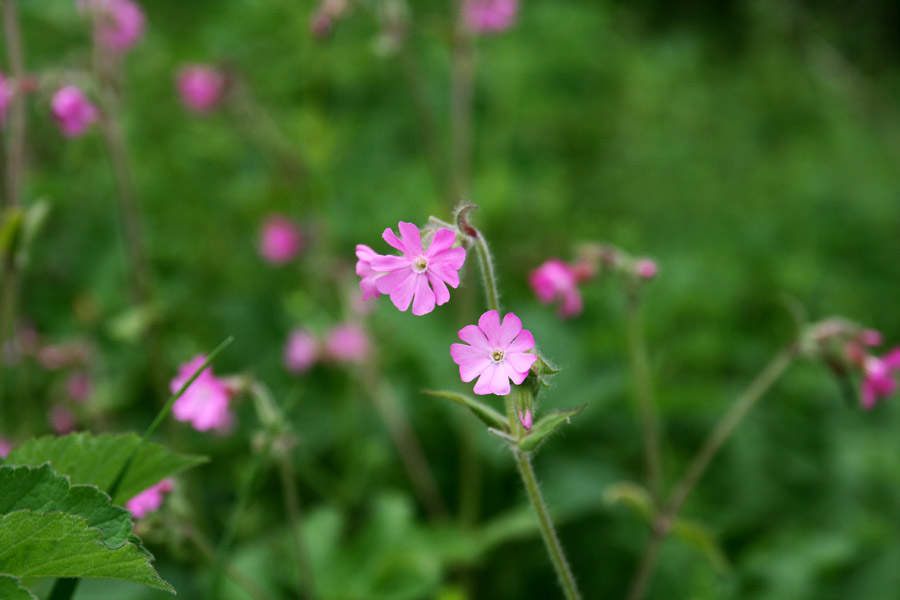 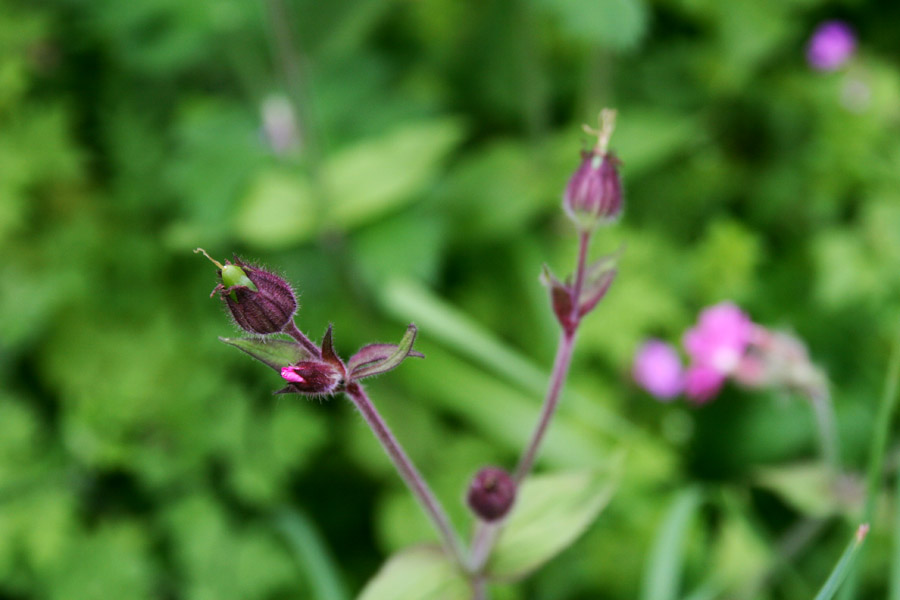 When we got back to the car, which we’d left in a kind of layby just off the A1107, something seemed different, and I realised someone had stolen my wheel trims. I didn’t realise people still stole wheel trims these days! It seemed quite a strange crime for such a rural location, but after looking around to see if they’d been thrown in the bushes anywhere, we came to the conclusion that it must have been a bit of entertainment for a passing ne’er-do-well.

Minus our wheel trims, we continued along the A1107 turning off for Pease Bay caravan park and drove through the ford on the Pease Burn, before climbing upwards and onwards to Cove.

Cove is a bit of a hidden gem. The main village is perched high on the cliff, where there is a public car park. Safe in the knowledge that there was nothing else removable left on my car, we parked and walked down the cliff path which leads towards Cove Harbour.

At the start of the path is a poignant memorial commemorating a 19th century fishing disaster. On the 14th of October 1881, during a terrible storm off the east coast, 189 fishermen perished at sea. Cove lost 11 of its 21 fishermen, devastating the community. A sculpture on the cliff top shows the widows and children looking out to sea.

The path slopes downwards, following the contours of the rocky coast, and leads to a tunnel opening.

This remarkable tunnel was cut through the rock in 1752 at the request of Sir John Hall of Dunglass, to provide access to the beach beyond, without having to walk the full way around the headland.

Deep within the tunnel are chambers which were used by fishermen to store their catch, and possibly smuggled contraband!

Emerging from the tunnel onto the beach you are met with wonderful red sandstone cliffs forming beautifully-craggy shapes.

The harbour itself was largely built in 1828 under the patronage of Sir James Hall of Dunglass, enhancing natural rock formations which jut out into the sea here.

The picturesque scenes are popular with artists, and The Glasgow Boys painted here regularly at the end of the 19th century. The harbour is now part of a privately-owned conservation area and is managed by the Cove Harbour Trust.

The patterns in the rock are quite remarkable, and prompted the celebrated geologist James Hutton to visit here in 1788, along with the aforementioned Sir James Hall of Dunglass, also a geologist.

A rock formation known as Hollow Rock, for obvious reasons, consists of a section of Old Red Sandstone through which a large hole has been eroded.

Cove really is a beautiful spot, and it would’ve been nice to stay for longer and explore the cliffs and caves. But we’d spent longer than planned at Cockburnspath Tower, so it was time to head for home, back through the tunnel and up to the car, which luckily hadn’t lost any more of its parts!