This simple tower stands on a shoulder of the eastern side of the Ailsa Craig, overlooking the only landing point on the island, and looking back towards mainland Scotland.

Little is known about the castle, and there are few features with which to accurately ascertain a date of construction, but it is thought to date to the early 16th century due to similarities in its design with some of the Border keeps.

In the early 15th century the Ailsa Craig was owned by the monks of Crossraguel Abbey, and is owned by the Kennedy family now, but its ownership between those times is less clear.

The monks may have built the first tower, which was then rebuilt or renovated by a Thomas Hamilton in 1580 (the Hamilton crest being carved on the castle). However it is also said that the Kennedys acquired the Ailsa Craig and its castle in 1560.

In 1597 Hugh or Hew Barclay of Ladyland seized the island in the hope of holding for a planned Roman Catholic invasion of Scotland by Philip II of Spain. The invasion of course never took place, and Barclay was drowned off the island’s coast. The Kennedy Earl of Cassillis is then said to have refortified the island to keep it safe.

Taking advantage of its situation on sharply sloping ground, it has a vaulted basement level partly cut into the rock, accessed from above by a trap door. The walls are relatively thin, measuring 0.75m wide.

Above this is the ground floor, entered by a door on the east side, facing the sea. Due to the sloping ground, this doorway is effectively at first floor level when standing in front of it, so it would have required a wooden stair. There is evidence on the wall of just such a structure.

Inside the tower on the ground floor is a small hallway, and across it, opposite the entrance doorway, is a door giving access to a vaulted room measuring around 4.3m by 3.4m.

A straight staircase leads from the hallway up to the first floor level, where there is a what seems to be a kitchen, measuring around 3.4m by 2.4m. At the western end of the room is a full width arched fireplace, and within the north-west corner of that is a small round oven.

To the east of the kitchen, and in the space above the entrance hallway, is a further vaulted room measuring around 1.8m by 1.8m. This may have been a larder or storeroom as there is a service window into the kitchen. It is accessed via a spiral staircase which also gives access to the second floor.

The second, and top, floor is now damaged, but recesses at each corner suggest that it was finished off with round turrets.

Originally the area to the north of the tower seems to have been enclosed by a courtyard wall, with walls extending from the north-east and north-west corners of the tower to a distance of around 9 metres. Nothing is now visible of this wall.

The title Marquess of Ailsa was created for Archibald Kennedy, the 12th Earl of Cassillis, in 1831. In May 2011 the Ailsa Craig was put up for sale by the Kennedy family.

Where is Ailsa Craig Castle?

Ailsa Craig Castle is in the parish of Dailly and the county of Ayrshire. 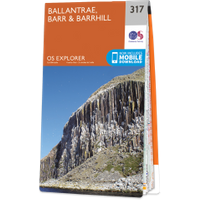 The Eisenhower at Culzean Castle