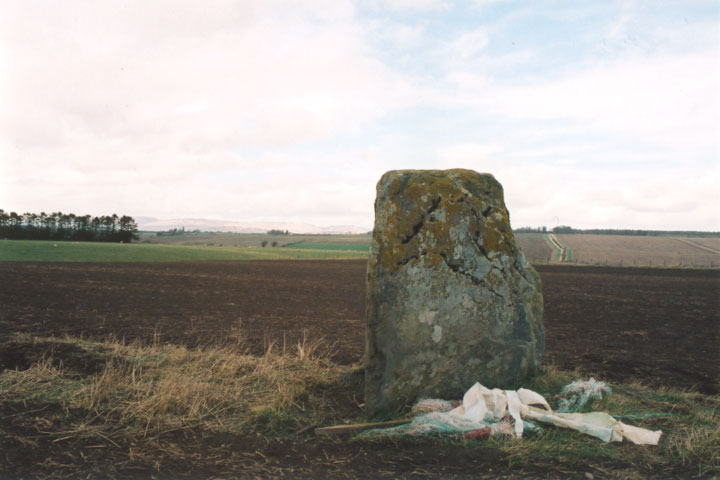 This stone stands on its own in a field close to Belhie farm on the haughs of Aberuthven. First appearances suggest that it’s an isolated site, but in fact the surrounding area features a complex of ritual monuments, mostly only showing up as crop-marks.

The OS Name Book recorded in 1860 that this stone was supposed to be all that remained of a “Druidical Temple” although it didn’t cite any references. The site is also marked on the 1867 OS map as “supposed remains of Druidical Temple”.

More recently, aerial photos taken in 1987 showed that the stone is surrounded by a probable henge showing up as faint cropmarks. There is a ditch of width 1 to 2.5m and diameter of around 21 to 22m, and the stone stands in the S sector of this enclosure, just inside the line of the ditch which seems to be interrupted. Within 400m of this site are to be found the cropmark remains of a second henge, a barrow and three further enclosures.

In 2004 the stone and it’s associated monuments were threatened by a film studio planning application, however this danger seems to have passed for the time being.

Belhie is in the parish of Auchterarder and the county of Perthshire.

bed and breakfastNew Fowlis
8.3km away

bed and breakfastNew Fowlis
8.3km away

bed and breakfastCrieff
11.8km away