This class II cross slab was moved from its original location near the River Findhorn and now stands within the grounds of Glenferness House.

Known also as the Princess Stone due to its association with the legend of a princess who drowned in the river, the stone was moved in the second half of the 19th century from its position on the edge of a promontory formed by a bend in the River Findhorn when it was deemed to be at risk from flooding.

The stone was broken into three pieces, presumably whilst being moved, which have now been cemented together and the stone supported by a new stone pillar on either side in its new position on a small cairn of earth and stones under an ash tree. The top portion of the stone has broken off, probably in antiquity, but the remains stand 1.68m tall above ground by 0.66m across and 0.1m thick.

Carved towards the top of one side is an equal-armed cross, the upper part of which would have been on the missing section. The surviving arms are filled with interlace knotwork and are separated by sunken armpits. On either side of the shaft are double spiral patterns which link into more double spirals which cover the majority of the slab. At the bottom of this side are a pair of figures seemingly embracing, or perhaps wrestling or fighting, within a rectangular surround.

On the other side of the slab the top third is covered in zoomorphic interlace knotwork while the bottom two thirds are taken up by various symbols. At the top right of this lower section is a small Pictish beast over a small crescent and V-rod, with a kneeling archer facing left to the left of them. To the left of the archer is a worn carving of a hound. Aligned centrally below is a large double disc and Z-rod above a large Pictish beast filled in with interlace knotwork.

The narrow edges of the slab are carved with further interlace knotwork although this is now obscured by the supporting columns.

Glenferness House is in the parish of Ardclach and the county of Nairnshire. 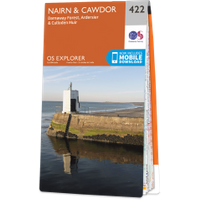 Snow
Weather observed at Nairn at 08:30

hotel, restaurantGrantown on Spey
17.4km away