Torthorwald Castle is a ruined 14th century tower standing on a motte which probably dates back to the 12th century.

The lands of Torthorwald are first mentioned in the 13th century, with the de Torthorwald family living there before the end of the century. Depending on the length of their residence it may have been them who established the motte-and-bailey castle, which was probably built in the 12th century. The motte stands just south of the confluence of the Torthorwald Burn and Roughcleuch Burn on rising ground above a boggy area which drains into the Lochar Water and ultimately the River Nith. The position was strategically important being situated on a main route into south-west Scotland from England and commanding views south and west across the Lochar Moss and Lower Nithsdale.

The motte was surrounded by extensive outworks. To the north was a broad ditch around 4.5m to 6.0m deep with an outer rampart beyond, with shallower ditches to the east and south. Beyond the east ditch was an irregularly-shaped enclosure flanked by a ditch through which a burn flowed and over which a bridge used to stand. The defences to the south and west have largely been ploughed away.

In the mid-13th century Henry of Graham, lord of Hutton, granted Sir David de Torthorwald all his land at Upper Dryfe for his homage and service. One of the witnesses to this grant was Humphrey de Kirkpatrick. In 1296 Sir Thomas de Torthorwald swore fealty to Edward I of England and he and his brother, Sir James de Torthorwald, were witnesses in the late 13th century to a grant of land by Robert de Brus, Earl of Carrick and Lord of Annandale, to Sir William of Carlisle.

Sir David died in 1296 and the castle passed to his only daughter, Isobel or Isabel, who married Sir Duncan Kirkpatrick, brother of Sir Roger Kirkpatrick of Closeburn. Some time after 1306 Robert the Bruce confiscated the lands, possibly because of the de Torthorwalds’ support for the English, and gave them to Sir John de Soulis. Sir Thomas de Torthorwald was apparently part of the English garrison of Lochmaben Castle in 1313. De Soulis died at the battle of Dundalk in Ireland in 1318 while fighting with Edward Bruce and Torthorwald passed to the Kirkpatricks.

In 1321 Robert the Bruce gave the lands of Torthorwald to Sir Humphrey de Kirkpatrick, son of Sir Duncan, for his homage and service, and also apparently partly as compensation for the destruction of the family’s castle at Auchencass, a grant that was confirmed in 1326. Four years later Sir John de Torthorwald, son of Sir James who was killed at Bannockburn fighting for the English, received compensation from Edward III for the loss of his Scottish estates.

When Edward Balliol invaded Scotland in 1332 Humphrey fled to England but later returned and went back to England as a hostage to secure the release of David II and died there in 1357. Humphrey was succeeded by Sir Roger Kirkpatrick of Closeburn, probably his younger brother. Around 1355 Sir Roger regained control of Caerlaverock Castle from the English and was appointed its captain but died the following year.

The tower is thought to have been built in the late 14th century and is rectangular in plan, aligned approximately north to south, and measures around 14.3m long by 12.0m across. The walls on the sides are around 2.1m thick while those at the ends are around 2.9m thick. The basement level was lit by two slit windows in the east wall and one in the west and was apparently not originally vaulted.

The original entrance was at first floor level on the east wall, on the south side of which was an intramural spiral staircase leading down to the basement. This staircase was later filled in when the castle was remodelled. On the west wall of the first floor is a small window, while there are two doorways in the south wall. One doorway, at the east end, was later blocked up but may originally have given access to an intramural chamber of some kind. The other led to a straight staircase running up within the wall to the south-west corner of the second floor where a spiral staircase led to further storeys. A spiral staircase in the north-east corner at first floor level led up to the second floor only.

When a later Sir Duncan Kirkpatrick died with no male heir some time before 1425 the estates were split between his three daughters. The eldest, Elizabeth, received Torthorwald and Janet, the middle daughter, received part of the lands of Kirkpatrick along with Auchencass.

William died in 1463 and was succeeded by his son, John Carlyle, who was created Lord Carlyle of Torthorwald by James III in 1473 and was Keeper of Threave and Lochmaben castles at times. The new Lord Carlyle renamed Torthorwald Castle as the castle of Carlyle although it seems to have reverted to its original name at some point.

In 1486 Sir John Carlyle, Lord Carlyle of Torthorwald, resigned numerous lands, including Ecclefechan and Kirkconnel Tower in Kirkpatrick-Fleming, which were then united into his barony of Carlyle.

Torthorwald was remodelled, possibly in the 15th century, with the introduction of a barrel vault in the basement which now rose to a height of around 4.6m and replaced the first two floors of the old layout. There may have been an entresol floor splitting this level in two, retaining access to the straight and spiral staircase starting at the old first floor level. A new entrance was created at ground level. The side walls of the tower were increased in thickness by around 0.8m to support the vaulting.

The new first floor was also vaulted, with the point of the vault rising to a height of some 7.6m, and would have been occupied by the Great Hall. Both the east and west walls have large window recesses towards their south ends, with a further window recess towards the north end of the west wall.

After the vaulting was added the tower seems to have been extended by around 2.9m to the north, with the extension having walls around 2.2m thick. The new wing had four storeys but the floor levels didn’t correspond with those of the main tower until the top of its upper barrel vault. In the north-west corner of the basement there is said to have been a well and within the thickness of the walls of the north-east corner a spiral staircase rose up to the third floor.

Seventh report with inventory of monuments and constructions in the county of Dumfries
RCAHMS, Edinburgh, 1920

Lord Carlyle died around 1500 and was succeeded by his grandson, Sir William Carlyle, who married Janet Maxwell, the sister of John, Lord Maxwell. The 2nd Lord Carlyle was granted a charter of the barony of Carlyle which incorporated the castle and lands of Torthorwald. Sir William died in 1525 and was succeeded by his son, James, who died before 1529. His widow, Janet Scrimgeour, daughter of Sir James Scrimgeour of Dudhope, was granted a liferent from the estate in 1529 while her brother-in-law, Michael, received the lands and barony.

This evidently led to a dispute as in 1544 Michael attacked the castle in order to forcibly evict his sister-in-law, with the Crown having to intervene. Janet complained to the Regent of Scotland, James Hamilton, 2nd Earl of Arran, and while the settlement was in her favour it also confirmed Michael’s possession of Torthorwald.

In 1547 Michael pledged one hundred and one men to the service of England and later surrendered Torthorwald to the English, but in 1548 it was recovered by Robert Maxwell, Master of Maxwell and later 6th Lord Maxwell, and Lord Carlyle was summoned to answer a charge of treason. His eldest son, William, Master of Carlyle, pre-deceased him in 1572 and Lord Carlyle recognised his granddaughter, Elizabeth, as his heir, before his death in 1575. However Lord Carlyle’s second son, also Michael, produced a charter of alienation of the barony of Carlyle in his favour and signed by his father in 1573.

The dispute between the competing claimants seems to have continued for many years, but initially the Regent Morton, James Douglas, 4th Earl of Morton, granted the ward of Torthorwald and the barony of Carlyle to his half brother, George Douglas of Parkhead. Michael Carlyle proceeded to sell most of the estate, except for the lands and castle of Torthorwald, to Lord Maxwell. In 1583 George Douglas’ eldest son, Sir James Douglas of Parkhead, was granted the profits of the Torthorwald estate but later that year James VI revoked the grant and instead gave them to Sir John Johnston of that Ilk for the lifetime of Michael. Johnston, warden of the West March, was later also given the lands and castle of Torthorwald for the safety of the nation.

Lord Maxwell seems to have held the castle in 1585 but in 1587 Elizabeth was granted Torthorwald and the barony of Carlyle and later that year she married Sir James Douglas of Parkhead. In 1594 the Lords of Session ruled that Michael’s charter of alienation had been forged and awarded full possession of the estate to Elizabeth. Sir James was murdered in Edinburgh in 1608 and succeeded by his eldest son, also James, who was created Lord Torthorwald in 1609.

James, 6th Lord Carlyle, seems to have run up large debts and in 1622 sold Torthorwald along with other estates to Sir William Douglas of Drumlanrig. Archibald Douglas of Dornock, the third son of Sir William, is said to have been the last resident of Torthorwald which may have been repaired or remodelled around 1630. During the rein of Charles II the castle was used as garrison for the King’s troops, with James Douglas, 2nd Duke of Queensberry, “repairing the castle of Torthorwald by putting it in ane condition fit for the garrison”, but in 1687 the castle’s furniture was sold at public auction. 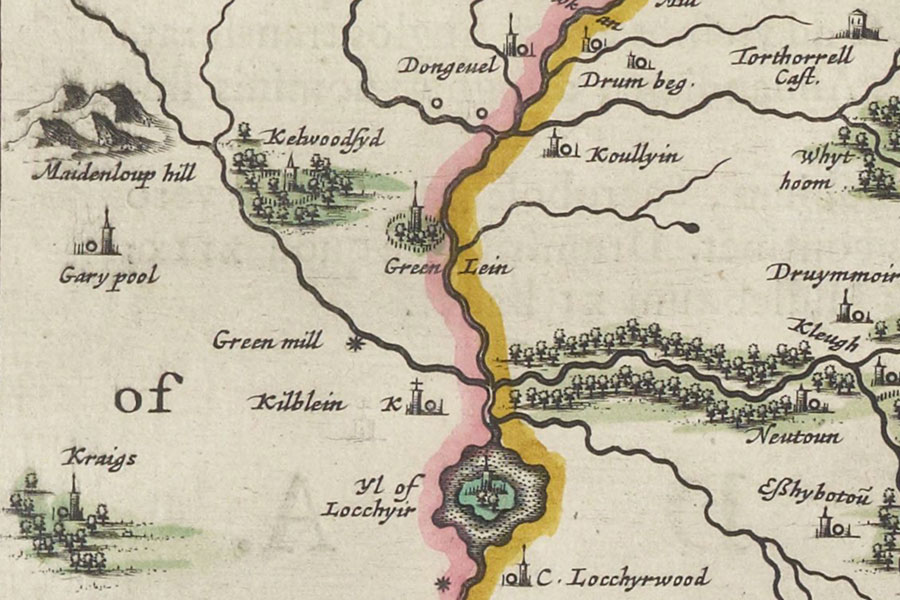 A stone believed to be from a crow-stepped gable and carved with that date was later taken from the castle and installed in the outbuildings of the local manse, built in 1725 to the east. A stone with a carved armorial shield was installed in the gable end of a cottage near the castle. When Grose visited in 1789 he met an old man in Lochmaben who remembered the roof being removed for use on another building, and by Grose’s time the north-west corner and most of the vaulting had fallen.

Torthorwald was owned by the Marquesses of Queensberry until around 1890 when John Sholto Douglas, 9th Marquess of Queensberry, sold it to James Jardine of Dryfeholm, brother of Sir Robert Jardine of Castlemilk. Jardine is thought to have been responsible for efforts to stabilise the ruins in the 19th century.

In 1993 the north-east corner of the tower collapsed, but the ruins still stand to a height of around 18.0m.

Where is Torthorwald Castle?

Torthorwald Castle is in the parish of Torthorwald and the county of Dumfriesshire.

James Grant
London, 1883
Buy from AmazonDownload
Collections for a History of the Ancient Family of Carlisle

Richard Kirkpatrick
London, 1858
Download
Proceedings of the Society of Antiquaries of Scotland (Volume 23)

Various
Edinburgh, 1889
Download
Seventh report with inventory of monuments and constructions in the county of Dumfries

RCAHMS
Edinburgh, 1920
Download
The Annandale family book of the Johnstones, Earls and Marquises of Annandale (Volume 1)

James Balfour Paul
Edinburgh, 1905
Buy from AmazonDownload
Transactions and journal of the proceedings of the DGNHAS (Series III, Volume 36)

Various
Dumfries, 1959
Download
Transactions and journal of the proceedings of the DGNHAS (Series III, Volume 38)

Various
Dumfries, 1961
Download
Transactions and journal of the proceedings of the DGNHAS (Series III, Volume 68)

bed and breakfastDumfries
5.0km away