Threave Castle is a 14th century tower house which stands on an island in the middle of the River Dee.

The castle, one of the earliest tower houses in Scotland, was built by Archibald Douglas, the Warden of the West March known as Archibald the Grim, from 1369 following his appointment as Lord of Galloway.

Threave Island is thought to have been occupied by the Lords of Galloway from the 11th century onwards, although what form their fortress took is unclear. During archaeological excavations in the 1970s ditches and stone structures apparently pre-dating the tower were uncovered although what form of fortification they represented was not ascertained. In 1308 Edward Bruce defeated a band of Gallwegians on an island in the River Dee and its possible that this may have been Threave.

The tower stands on the western edge of the island which at the time of the tower’s construction is estimated to have been around a third of its current size of 20 acres, the river level having been higher in medieval times. Rectangular in plan, the tower is aligned approximately north-west to south-east and measures around 18.6m long by around 12.2m wide with walls some 3.0m thick, rising to a height of around 21.3m. Around the base of the tower is a rock-cut ditch which would have been fed from the river. The entrance to the castle is in an elevated position on the east side and would originally have been reached via a timber stair and bridge over the moat.

It leads to a reception hall on an entresol under the vaulted ceiling of the ground floor, at the south end of which was the kitchen. The basement level below, accessed by ladder, contained storage cellars, a prison and the castle’s well.

A spiral staircase within the thickness of the wall at the north-west corner leads up to the Great Hall on the first floor. On the second floor were the lord’s bedchamber and associated outer chamber.

On the third floor was accommodation for the garrison and from which the battements could be accessed via a doorway in the south wall. Nine windows on this floor offered good views in all directions. High above the entrance to the tower was a platform supported by corbels which the defenders of the castle would use to drop various objects onto the attackers below. Square holes at the top of the external walls would have supported a bretèche, or timber balcony and walkway, which would have been used for the same purpose.

In 1388 Archibald the Grim succeeded his cousin to become 3rd Earl of Douglas and the most powerful noble in Scotland. He died in 1400 and was succeeded by his eldest son, also Archibald. The 4th Earl was killed at the Battle of Verneuil in 1424 after which Threave and the Lordship of Galloway were administered by his widow, Margaret of Carrick, a daughter of Robert III. She outlived her sons and grandsons but around 1447 was forced to cede the Lordship to William Douglas, 8th Earl of Douglas.

A curtain wall was built around the east, south and west sides of the tower with the sections to the east and south forming an artillery house. The date of construction is variously attributed to William Douglas, 8th Earl of Douglas, in 1447 or Robert Maxwell, 5th Lord Maxwell, around 1513. In the middle of the east wall was a gatehouse around 8.0m tall with an elevated entrance once protected by a drawbridge and two inner doors.

At each of the three corners was a round tower although only that at the south-east corner remains standing to a significant height. Each tower was furnished with three gun ports on two levels and topped off with a crenellated parapet. The lower gun ports were dumbbell-shaped while the upper ones were inverted keyhole-shaped.

The curtain wall, which was battered for extra strength against an artillery attack and pierced by vertical slits, was around 1.5m thick and originally rose to a height of around 6.0m. At its closest point the wall is only 4.4m from the keep but it isn’t clear if there was direct access between them.

To the west of the tower the wall ran along the edge of the river bank before curving back to the north-west corner of the tower, partly enclosing a gated harbour.

On the north side the castle was protected by an earth bank beyond which was marshy ground offering a natural defence.

To the east and south-east of the tower stone buildings pre-dating the artillery house offered ancillary accommodation, stores and workshops however these are thought to have been cleared away at the time the artillery defences were constructed in order to provide a clear line of sight. The buildings were uncovered during archaeological excavations between 1974 and 1978 and included two substantial ranges one of which may have contained a great hall and the other lodgings and a chapel.

Tensions between the Black Douglases and the Crown continued to rise and in 1452 the 8th Earl of Douglas was summoned to Stirling Castle where he was stabbed by James II and finished off by the King’s retainers. During the summer of 1455, and following the Battle of Arkinholm, forces loyal to the King laid siege to Threave.

Despite a bombard being transported from Linlithgow Palace the castle held out and it was only through negotiation that the siege was ended, with James II promising lands to the Douglas supporters.

Lord Maxwell was captured at the Battle of Solway Moss in 1542 and forced to hand Threave over to the English, however it was retaken by James Hamilton, 2nd Earl of Arran, in 1545.

In 1587 John Maxwell, 8th Lord Maxwell, travelled to Madrid where he was involved in the planning of the Spanish Armada. As Catholics in an overwhelmingly Protestant Scotland the Maxwells were already viewed with some suspicion and upon his return in 1488 he was arrested as a traitor but freed the following year.

The Maxwells supported Charles I during the Bishops’ Wars of 1639 and 1640, precursors to the Wars of the Three Kingdoms and a garrison of 100 men was quartered at Threave. A bank to the east of the castle, which returns on the north and south sides, was built by the garrison just before a siege in 1640 by an army of Covenanters. The garrison held out for 13 weeks but eventually surrendered on the orders of the King, following which some demolition work was carried out and although the tower and artillery house were left largely intact the castle was never again occupied.

Around 1800 during the Napoleonic Wars the castle was modified for the incarceration of French prisoners although it isn’t known if it was actually used for this purpose. The castle passed into state care in 1913 following which some repairs were made including the rebuilding of the vault, part of which had fallen.

The castle is now in the care of Historic Environment Scotland and open to the public.

Threave Castle is in the parish of Balmaghie and the county of Kirkcudbrightshire. 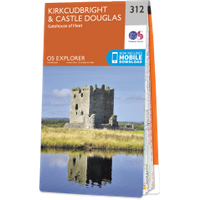 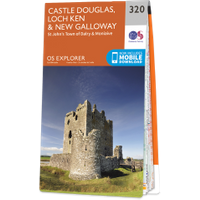 The Castellated and Domestic Architecture of Scotland Volume 1

bed and breakfastCastle Douglas
2.7km away

hotelOld Bridge of Urr
3.9km away

bed and breakfastDalbeattie
9.1km away

hotelGatehouse of Fleet
15.0km away

hotelGatehouse of Fleet
15.7km away