Little seems to be known about the early history of The Haining, an 18th century mansion on the south-west edge of Selkirk, but it replaced an earlier castle.

The Haining’s ancient predecessor was Selkirk Castle, the motte and bailey of which still exist in woodland to the east of The Haining. This fell out of use some time before 1334, but there is a gap of almost 130 years before the estate of Haining first appears on record in 1463.

In that year The Haining, or Hanyng as it was written, was in the possession of a Robert Scott. It remained in the Scott family through the 15th, 16th and 17th centuries, with a later Robert Scott of Haining serving as provost of Selkirk in the 1590s and then again in 1614.

It seems likely that a castle was built by the Scotts, although exactly when or where is unclear. However on Robert Gordon’s map of the Clyde and Tweed basins, which probably dates to the first half of the 17th century, a castle named Haning is shown to the south-west of Selkirk.

A map of the Clyde and Tweed basins
Robert Gordon, c.1636-52map image courtesy of NLS

It also appears as the tower of Haning on Blaeu’s mid-17th century map. 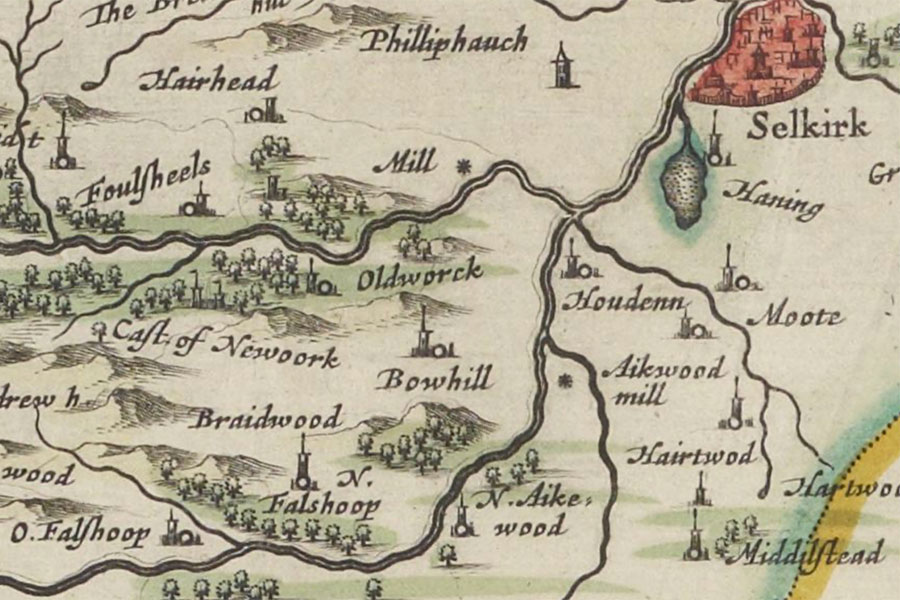 It is known that an earlier building stood immediately to the west of the present house, and this seems a likely position for a castle. It’s an elevated site, overlooking Haining Loch to the south, cut off to the west by the deep gully of the Clockie Sorrow, Selkirk Castle‘s hill to the east, and with the land falling away to the north before climbing again to Selkirk itself.

In 1625 Lawrence Scott sold The Haining to Andrew Riddell of Riddell, who set about making improvements to the estate. When he decided to drain the marshy loch in front of The Haining of its “stinking water” in 1661, it became the subject of a legal case as the Mayor of Berwick believed it could have a negative impact on salmon stocks further down the River Tweed. Riddell won however, and the level of the loch was lowered.

To the west of the old house’s site, situated on the north east slopes of Murieston Hill, is a large dovecot which looks like it could be 17th century in date.

An estate map from 1757 features a drawing of the old house, which has a decidedly 17th century appearance. It seems to consist of a wide central three storey block, from which project symmetrical three storey wings, so forming a U-shape in plan. It seems probable that Riddell extended and improved the Scotts’ castle during the course of his improvements.

The Riddells sold The Haining to Andrew Pringle of Clifton in 1702, who gave it to his son, John Pringle, a lawyer. John was responsible for increasing the size of The Haining estate and landscaping it, and upon his appointment as a Lord of Session in 1729 he was created Lord Haining.

When Lord Haining died in 1754, his second son, also John, succeeded to his estates. Upon John’s death in 1792 The Haining passed to his great-nephew, Mark Pringle. In 1794 he commissioned the local architect William Elliot to build a new house immediately to the east of the old house.

The estate was developed further over the years by members of the Pringle family, and around 1820 the Edinburgh architect Archibald Elliot was commissioned to remodel and extend the new house, giving it a Palladian style.

Around the same time, stables and estate offices were built immediately to the west of the old house, the rear of the stables having an arcaded south wall.

There were plans to demolish the old house and construct extensive new wings on either side of the new house, but these were never carried out and the old house was retained as kitchens and servants’ quarters.

The old house continued to stand right into the 20th century, but in 1943, having been requisitioned and occupied by the Free Polish army, it was accidentally burned down and never rebuilt. The last remains of the ruins of the old house were apparently removed in the 1950s, and the site is now occupied by gardens.

Alternative names for The Haining

Where is The Haining?

The Haining is in the parish of Selkirk and the county of Selkirkshire.

OS Map for The Haining

Directions to The Haining

Weather at The Haining

Castles near The Haining

Ancient sites near The Haining

Pictish stones near The Haining

Pictish sites near The Haining

Accommodation near The Haining

bed and breakfastInnerleithen
15.6km away

Cafés, restaurants & bars near The Haining