Strathaven Castle is a ruined 15th century castle standing at the centre of the village of Strathaven.

Situated within a bend in the Powmillon Burn, which defends the site on the west, south and east sides, the first castle is thought to have been constructed at the end of the 12th or beginning of the 13th century. The barony of Strathaven was granted to Robert de Bigres or de Biggar around 1200. The castle would have been a wooden tower standing on a rocky outcrop that had earth piled around it to form a large mound.

Later the property passed to the Baird family and they are thought to have been responsible for building the first stone castle here, possibly in the first half of the 14th century. This castle had a central keep on top of the mound, rising to a height of five storeys with walls some 3.0m thick. A battlement surmounting the walls was 1.5m in height. Surrounding the castle was an outer courtyard wall around 1.2m thick, with thirteen turrets at equal distances along it.

At the centre of the courtyard, which was paved with stones, was a well. Also within the courtyard was a bakehouse, brewhouse and laundry, the site of which is now occupied by the Town Mill and Mill Cottage to the north-east of the castle.

Some histories of the castle state that it then passed to the Sinclair family, and later to the Earls of Douglas, while others have it that the castle came into the possession of the Douglas family following the marriage of Archibald Douglas (also known as Archibald the Grim), the 3rd Earl of Douglas, to Joanna de Moravia, daughter of Maurice de Moravia, Earl of Strathearn, in 1362.

It seems probable that Strathaven Castle passed from the Sinclairs to the Douglases through one of these two Douglas-Sinclair marriages, and that the story of it passing from the Earl of Strathearn was a mistake based upon the marriage of Joanna de Moravia to Archibald the Grim (which did bring a lot of other property into the Douglas family).

Upon the death of Archibald in 1400 Strathaven passed to his infant son, also Archibald, who became the 4th Earl of Douglas. The 4th Earl was killed at the Battle of Verneuil in France in 1424, and was in turn succeeded by his son, another Archibald, who became the 5th Earl. The 5th Earl died from a fever in 1439, and was briefly succeeded by his son, William Douglas, who was executed the following year.

Strathaven passed next to William’s great-uncle, James Douglas, later known as James the Gross, who in 1437 had been created the 1st Lord Avondale. James, the 7th Earl of Douglas, died in 1443 and was succeeded as 8th Earl by his son, William, who was murdered by James II at Stirling Castle in 1452.

He was succeeded by his brother, James, as 9th Earl, who began a campaign against the King which led to the King capturing and destroying Strathaven Castle in 1455. The same year the 9th Earl was attainted and his lands and estates forfeited to the Crown. The barony and castle of Strathaven were given by the King to his relative Andrew Stewart in 1456, an illegitimate grandson of the 2nd Duke of Albany.

In 1458 the castle was rebuilt on the site of the old keep. Rectangular in plan, it measured around 21.3m by 11.6m and was aligned approximately east to west. The new castle is variously described as having been three to five storeys in height, and may perhaps in fact have consisted of three or four storeys plus a garret.

The walls were up to 2.1m thick at ground level and the basement was vaulted, as indicated by some slight remains in the ruins. On the first floor was the Main Hall while on the upper floors private chambers and other accommodation.

At the north-west and south-east corners towers were built onto the main block, although both of these may have been added later. It has been speculated that the round tower at the north-west corner may date from the 16th century as the walls are much thinner than the rest of the castle. There is some debate as to whether there was a second round tower at the south-east corner or a square tower.

There is little of this tower left today, but the latest thinking seems to be that it was a square tower. However a drawing from 1788 seems to suggest that it was a round tower. The same drawing shows a parapet supported by corbelling running around the top of the castle, which probably dates to the 15th century. The parapet was defended by eight round turrets.

The Traveller’s Guide Through Scotland, and Its Islands, Volume 1
Robertson, Edinburgh, 1814

At the time of the drawing a barmkin still existed, again probably dating to the 15th century. It projected to the north of the castle and its walls were around 1.5m thick. It was later destroyed by the construction of Stonehouse Road in 1826.

The castle was further defended by a large outer wall which surrounded the majority of the village of Strathaven, and the main gate was within a large gatehouse at what is now Sandknowe to the north of the castle.

Stewart was created the 1st Lord Avondale (second creation) in 1459 but apparently didn’t reside much at Strathaven. Following his death in 1488 the lands of Avondale, including Strathaven, passed to his nephew Alexander Stewart, and then on to Alexander son Andrew who was created the 1st Lord Avondale (third creation) in 1499. Andrew died at the Battle of Flodden in 1513 and was succeeded as 2nd Lord by his son, also Andrew.

The 2nd Lord seemingly became involved in feuds with his neighbours, and in 1534 exchanged the lands of Avondale and Strathaven Castle with Sir James Hamilton of Finnart for the barony of Ochiltree in Ayrshire, later becoming the 1st Lord Ochiltree.

Hamilton was a second cousin of James V and a skilled architect, having been appointed Steward of the Royal Household and Master of Works. In 1530 he built Craignethan Castle for himself, and was responsible for work on the Royal residences of Linlithgow Palace, Blackness Castle, Falkland Palace (possibly) and Stirling Castle.

Strathaven Castle was extended or remodelled in 16th century and it seems likely that it was Hamilton who carried out this work. It is probably at this time that the north-west tower was added.

Rising to a height of four storeys, it features gun loops and several rectangular openings, some of which are blocked. On the north-east side of the tower is a very low doorway, above which are a pair of niches for armorial panels.

In 1540 Hamilton of Finnart was executed for plotting against the King, and the castle seems to have passed to his half-brother James Hamilton, the 2nd Earl of Arran and later Duke of Châtellerault, as a letter from 1559 refers to the 2nd Earl’s children as being resident there.

The next recorded owner of Strathaven Castle was the 2nd Earl’s grandson James Hamilton, 2nd Marquess of Hamilton and 4th Earl of Arran, who is said to have bought the barony in 1611. Strathaven Castle remained in the Hamilton family for the next three centuries.

The Hamiltons featured prominently in the Wars of the Three Kingdoms as General Sir James Hamilton, the 3rd Marquess of Hamilton, led the Royalist army in 1639. The castle was later seized and occupied by the Covenanters, although by 1650 it was in the hands of Quentin Hamilton of Barncluith for the Royalists.

During Cromwell’s Protectorate of the 1650s Anne Hamilton, Duchess of Hamilton, forfeited her estates and was forced to leave Hamilton Palace, taking up occasional residence at Strathaven Castle.

Following the Restoration the castle was garrisoned by government troops in 1668 and used as a prison for Covenanters. One local Covenanter, William Paterson, was shot and killed within the castle walls in 1685.

The Duchess of Hamilton was the last Hamilton occupant of Strathaven Castle, although she split her time between there, Hamilton Palace and Brodick Castle. Following her death in 1716 the castle was occupied for a time by the Duke of Hamilton’s Chamberlain and gardener.

By 1725 the castle was being used by the villagers as a place to play games, hold markets, court proceedings and religious services. The castle gradually began to fall into ruin, and several of the turrets were struck by lightning in 1736. The following year a great storm blew off a considerable part of the roof.

In 1740 the main gates from the entrance at Sandknowe were taken to the Hamilton family burial vaults at Hamilton Palace. Over the years locals used stone from the castle and its surrounding wall for building projects, and parts of the castle walls fell.

During the aforementioned construction of the Stonehouse Road in 1826, which destroyed the barmkin, a deep well was found within which was a set of keys which were subsequently given to the Duke of Hamilton. Local legends suggested that there may have been tunnels leading from the castle to Sweeties Brae, Peggys Holm on the Mill Brae and an ancient watchtower 1 mile north of the village. However when the new road was cut through at a depth of 6m no trace of any tunnels was found.

A substantial section of the castle’s walls fell in 1847, leaving it in more or less the state that it is today. Human bones were found within rubble from the south wall which had fallen, possibly lending credence to a legend stating that the wife of one of the castle’s previous owners was walled up alive in a purpose-built niche for some misdemeanour.

In 1912 the Town Improvement Committee negotiated with Alfred Douglas, the 13th Duke of Hamilton, to undertake consolidation work. The remaining walls were repointed and rubble was cleared from the castle’s interior.

In the late 1960s the castle was under threat of destruction at the hands of town planners, but as the cost of demolishing was the same as consolidating it, the castle was given a reprieve. The walls were again repointed, the windows and entrance blocked up, and unsympathetic concrete reinforcements and steel pins were added.

Landscaping which was carried out by East Kilbride District Council and the Lanarkshire Development Agency in 1993 uncovered the remains of an enclosing stone wall around 0.9m thick to the south-east of the castle.

Today the north wall is largely complete, although reinforced on the interior side with concrete. Only a tall central part of the south wall remains standing, and a section of the lower part of the west wall. The ruins do however still give an impression of what it must once have been like.

Where is Strathaven Castle?

Strathaven Castle is in the parish of Avondale and the county of Lanarkshire. 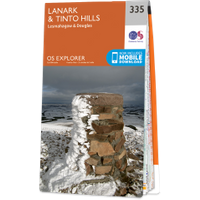 A History of Strathaven and Avondale

Mike Slater
Malvern, 1993
Buy from Amazon
The Traveller's Guide Through Scotland, and Its Islands (Volume 1)