Snelsetter Castle was a tower house that stood on the southern edge of the Orkney island of South Walls.

For now I have placed it where the farm is currently located, as the complete lack of any visible ruins seems strange given its known relatively recent history. This leads me to believe that the farm may have been built on the site of the old castle.

On early maps the castle appears with variations on the spelling of its earlier name of Walls. Abraham Ortelius’ map Scotiae Tabula from 1580 shows it as “Wase”, but the relative inaccuracy of the map makes it difficult to establish its precise location. However it does appear to be on the south coast of South Walls, approximately to the south of the present farm.

By 1636 it appears with its new name of Snelsetter, written as Saelster on a Henrik Hondius map that was engraved in that year but published in 1662. Its location would appear to be towards Kirk Hope rather than to the south of the current farm.

It is shown on Blaeu’s map of 1654 as “Snelster”, and is what appears to be a substantial castle. On this map it does certainly seem to be immediately to the west of Kirk Hope bay rather than south of the farm.

In the text of Blaeu’s Atlas there is a description of Snelsetter:

There are very many buildings on it, and very many spirited inhabitants, in particular a dwelling called Snelsetter to the south, and one called Melsetter to the west. It also has an anchorage for ships not far from Snelsetter, quite commodious. Here too is an adequate church

On Nicolas Sandon’s 1665 map of 1665 it is shown as “Snelstet”, and appears to be located somewhere to the south of the current farm of Snelsetter.

The castle is believed to have been built by the Moodie or Mudie family, possibly in the 15th century. William Mudie of Breckness, Snelsetter Castle and Melsetter was Chamberlain of Orkney under Mary Queen of Scots from 1571 until 1574. A charter from the queen describes Snelsetter as having been possessed by the Moodies “beyond the memory of living man”.

In 1591 a charter from James VI describes the Mudies as having been owners of Snelsetter “from time immemorial”.

Snelsetter Castle is thought to have been the Mudies’ first residence in South Walls, but was later succeeded as their main home by Melsetter, which occupied a less exposed location.

During a dispute with Patrick Stewart, the 2nd Earl of Orkney, in 1598, the Earl seized the castle when Adam Mudie was in Edinburgh, with the Earl installing a garrison in the castle and fortifying it.

The castle seems to have been returned to the Mudies later, possibly after the death of the Earl in 1615, and the castle was in the possession of the Mudies in 1650, when a George Drummond and Marjorie Graham are recorded as having lent money to a Mudie of Snelsetter.

Despite the family feud, another William Moodie and Barbara Stewart, daughter of the 1st Earl of Orkney’s grandson, married, apparently against their parents’ wishes, in 1670. Their marriage was commemorated in stone, with the initials “W.M.” and “B.S.” being carved into a stone panel which may have been installed over the arched gateway into Snelsetter Castle.

This panel was later removed from the ruins of Snelsetter and used as lintel above a window in a farm building near Melsetter House. The archway itself was also removed and built into another wall at Melsetter.

In 1681 a James Moodie of Melsetter died at Snelsetter Castle, possibly a son of William and Barbara. Snelsetter seems to have been occupied as late as 1690.

The 8th Moodie laird of Melsetter, Captain Benjamin Moodie, was on the Hanoverian side during the Jacobite Rising of 1745, and apparently put considerable time and effort into harrying known Jacobites in the Orkneys in subsequent years. This appears to have put a strain on the family finances.

The last Moodie owner of Snelsetter was a Major James Moodie, whose main residence was at Melsetter. In 1818 he was forced to sell the family’s estates, the breaking up of which led to an acrimonious legal battle.

One of the Major’s daughters, Henrietta Moodie, had married a Robert Heddle, who bought Melsetter from the creditors, retaining a Moodie link of sorts. However it appears that Snelsetter passed out of the Moodie family at this time.

In the 1750s stone from Snelsetter Castle was used to build a barn and granary, known as The Old Horse Mill, to the west of the current farm of Snelsetter. Interestingly the end of this building looks very tower-like, and a photo in sales particulars reveals it to have massively thick walls. Could part of the old castle have been incorporated into the mill?

Snelsetter is still shown as what looks like a tower house on John Thomson’s map of 1832, however it seems that by this time the castle was in ruins, as it is mentioned as such in an account from 1868.

A stone gate pier (at ND 33602 89316), recently restored, is said to have belonged to Snelsetter Castle, although whether or not it is in its original position is unclear. It is thought to date from the 18th century, so is probably related to the development of the estate in the 1750s rather than the old castle.

In 1995 the mill was converted into a residential property.

Snelsetter Castle is in the parish of Walls and Flotta and the county of Orkney. 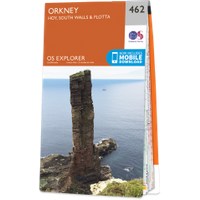 Kirkwall in the Orkneys

Various
Edinburgh, 1845
Download
Summers and winters in the Orkneys