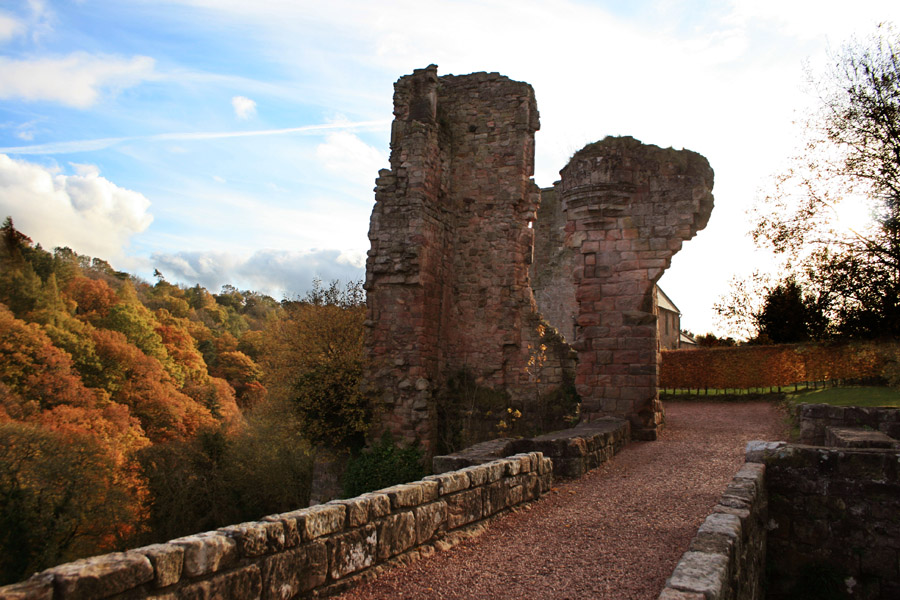 The Sinclair family (sometimes written as St. Clair or Sanctclare), ancient Princes and Earls of Orkney, owned land in the Lothians from 1162. In the 1330s Rosslyn Castle was built by Henry Sinclair, the 1st Earl of Orkney, on a high rocky outcrop above the River North Esk.

Initially it took the form of a square keep, and was presumably at the south-east corner of the site, now incorporated into later buildings. A second tower was added around 1390, at the south-west corner of the site, which was rectangular in plan but featured rounded corners. Access was along a ridge to the north, but to improve the defences a ditch was cut through this ridge and a drawbridge and gatehouse were built.

In 1452 the castle was badly damaged during an accidental fire, but was rebuilt. Around this time a curtain wall was built on the west side of the site, presumably to counter the threat from improvements in ordnance. At the bottom of the curtain wall are six arched niches which correspond with seven buttresses on the outside of the wall. One of the niches contained a postern gate, while the others appear to have featured windows at some point in their history, although they are now blocked up. 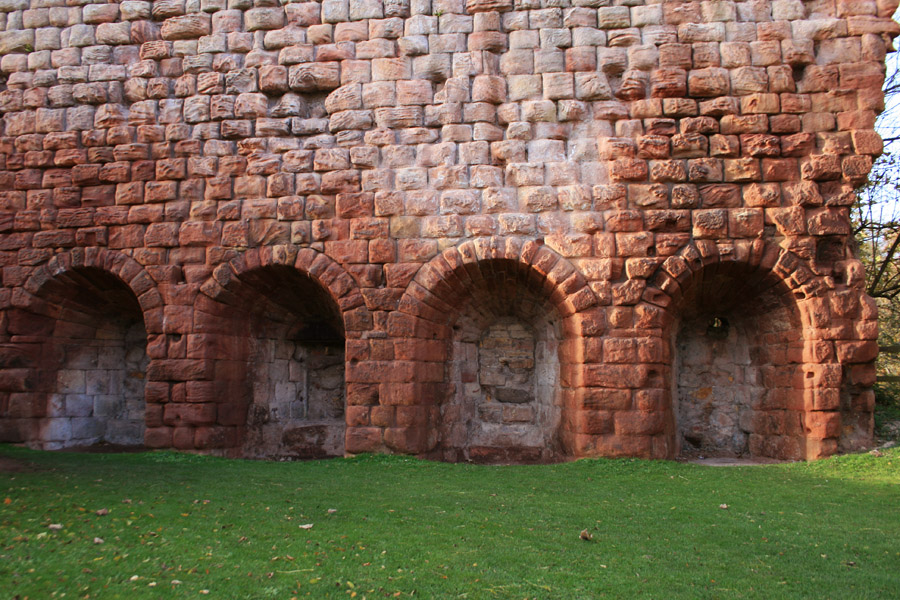 The castle suffered further in 1544 at the hands of the Earl of Hertford, who destroyed it through burning during the Rough Wooing. The majority of the south-west corner tower was destroyed, but sections of it survived and one wall can still be seen standing today.

In the second half of the 16th century the castle was rebuilt, with a five-storey east range growing out of the cliff face. This may well have included remnants of the first castle built in the 14th century. The three lower floors were carved out of the rock, and all feature vaulted ceilings. 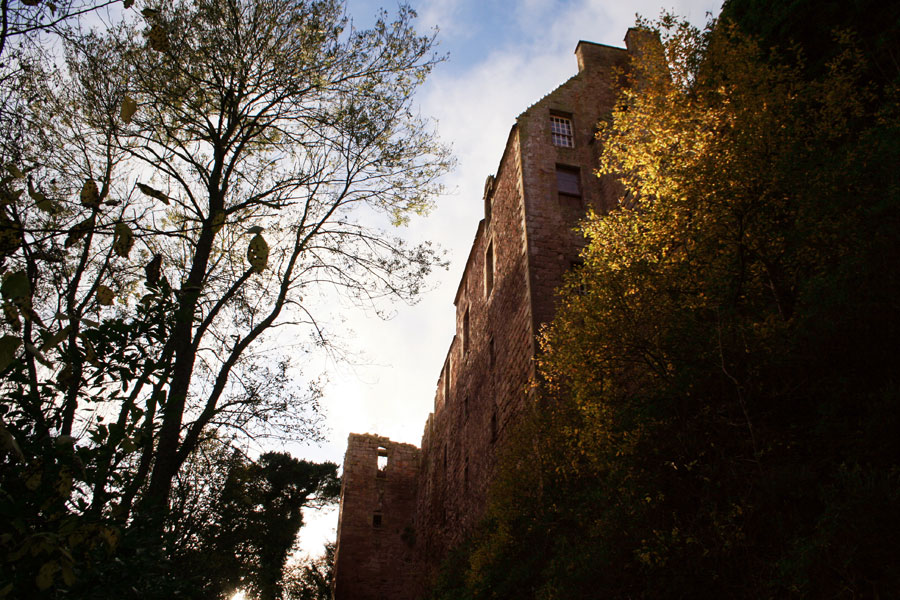 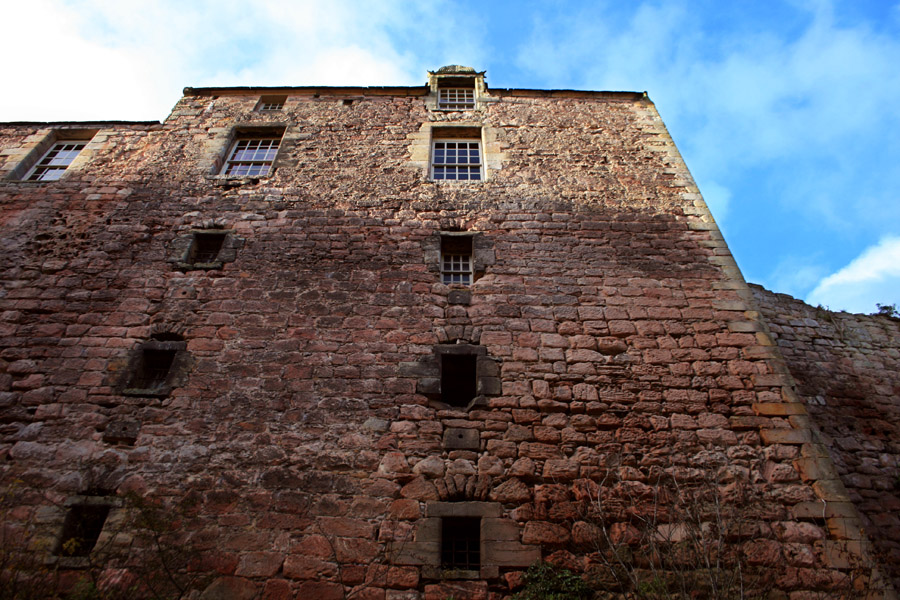 In the main hall is a large fireplace carved with the initials WS and JE, for William Sinclair and his wife Jean Edmonstone, and the date 1597, suggesting this is when the rebuilding work was completed. At the same time the gatehouse was reconstructed and the drawbridge was replaced with a permanent stone bridge crossing the ditch, supported by a great stone arch.

In 1622 the upper floors of the east range were decorated with richly-carved details around the door and window surrounds in the Renaissance style, providing more fitting accommodation for the status of the owners. From the courtyard level it appears to just be a fairly small two storey building. 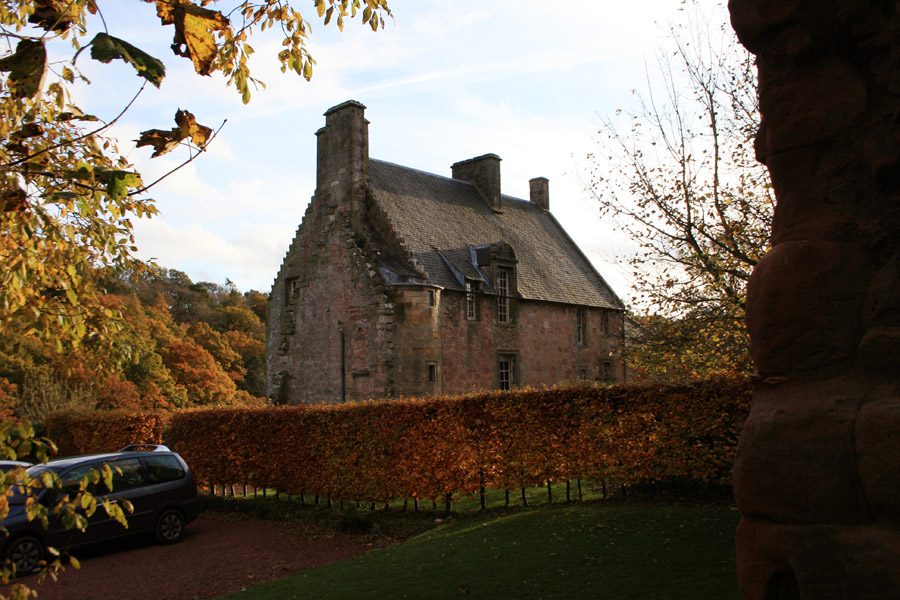 Rosslyn Castle suffered again in 1650, when General Monck fired artillery at it during Cromwell’s campaign in Scotland. Further damage was sustained in 1688 at the hands of a reforming mob associated with the Glorious Revolution of 1688. By the 18th century the castle was in a poor state of repair, although it was still inhabited.

Between 1982 and 1988 the east range was restored by the current owner Peter St Clair-Erskine, the 7th Earl of Rosslyn, and is now rented out as holiday accommodation via the Landmark Trust.

On a neighbouring outcrop a few hundred metres away is the famous Rosslyn Chapel.

Where is Rosslyn Castle?

Rosslyn Castle is in the parish of Lasswade and the county of Midlothian.

bed and breakfastLoanhead
2.6km away

bed and breakfastArniston
5.4km away