The ruins of Mouswald Tower most likely date back to the 15th century and now stand within a holiday park.

When the first tower was built at Mouswald is not known, but the lands of Mouswald are first mentioned in the first half of the 13th century during the rein of Alexander II when they seem to have been held by vassals of Robert de Brus, probably the grandfather of Robert the Bruce. In 1320 Robert the Bruce granted Thomas, son of John of Carruthers, the whole lands of Mussald (Mouswald) and Apiltretwayt (Appletreewhat or Applegarth) and in 1351 Thomas’ brother is styled William Carruthers of Mosswald in a charter of the lands of Middlebie from David II.

King David seems to have visited Mouswald in 1361 since he granted a charter there to John of Carruthers of one half of the the lands within the tenement of Mouswald which formerly belonged to John of Rafhols, which was witnessed by Roberts Carruthers, laird of Mouswald.

Mouswald seems to have become the main focus of the Carruthers’ estates, superseding their original lands of Carruthers which by 1464 were in the hands of Sir John Carlyle, later Lord Carlyle of Torthorwald. In 1484 James III granted the lands of Raffles to Archibald Carruthers of Mouswald, the tower there offering enhanced protection of the south-eastern approach to their estates.

It seems likely that a tower would have existed at Mouswald by this time. The tower stands on slight rising ground to the north of the Cleuchbrae Burn and was oblong in plan, measuring around 7.3m long by around 5.4m wide with walls some 1.8m thick. There is no evidence that the basement level was vaulted but it was protected by gun-loops and carried two further storeys.

In 1544 Mary Queen of Scots erected various other lands, including parts of the old barony of Carruthers, into the free barony of Mouswald for Simon Carruthers and the tower and fortalice of Mouswald are specifically mentioned in the grant. Simon died in 1548, thought to have been killed in a Border raid by Lord Herries, leaving no male heir. His daughters, Janet and Marion, were made wards of Sir James Douglas of Drumlanrig and within a few years Simon’s estates had passed through the hands of no less than seven male heirs.

Douglas subsequently brought a lawsuit which resulted in Simon’s daughters being recognised as co-heiresses of their father’s estates at the expense of a further male heir. There seems to have been an attempt to protect the Carruthers’ estates from Douglas’ influence as in 1550 Robert Maxwell, 6th Lord Maxwell, was in possession of “the house of Mowswald” and seemingly allied with the Murrays of Cockpool, maternal relatives of the Carruthers heiresses.

In 1560 Janet Carruthers married Thomas Rorison of Bardannoch, whose father had sworn fealty to Douglas in 1544, and granted to Douglas her half of her father’s estates. Douglas seems to have closely controlled Marion’s life in order to ensure that she couldn’t marry someone who would then take ownership of her half. In an attempt to escape Douglas’ influence she conveyed her half of the lands of Mouswald to her uncle, Charles Murray of Cockpool, in 1564, the deed written at Comlongon.

In 1570 Marion Carruthers fell to her death from the battlements of Comlongon Castle, traditionally by suicide although foul play is suspected by some since her half of the Mouswald estates subsequently passed to Douglas.

In 1608 Douglas granted his second son, James, the lands of Mouswald, founding the Douglas of Mouswald family, and in 1617 he was accused of the murder of John Carruthers of Dormont. Mouswald remained with this branch of the family for around a century before it passed to the Duke of Queensberry who was descended from Douglas’ first son, William.

Around 1815 Charles Douglas, 6th Marquess of Queensberry, gave permission for the tower to be dismantled. The coping and corner stones were removed and the old entrance gateway was taken by Douglas’ neighbour at Rockhall, Grierson of Lag, to install at his stables.

A new house, Mouswald Place, was built just to the west of the tower supposedly in the same year and a carved stone, now indecipherable but said to have been taken from over the arch of the castle’s drawbridge gate, was installed on one of its walls. However a Charles Carruthers, who was a tenant of Mouswald Place around 1830 when it was sold by the Marquess of Queensberry, was apparently born at Mouswald Place in 1794 suggesting the construction of a new building before 1815. 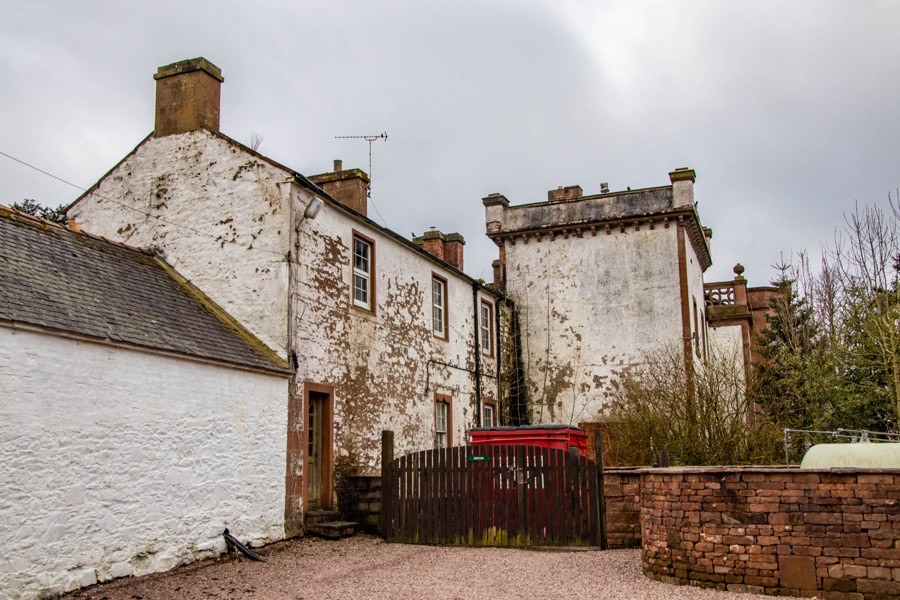 In 1834 Carruthers’ son was born at Mouswald Place but by the mid-19th century Mouswald Place was owned by Robert Threshie, described as a banker and writer. Threshie died in 1860 and the next owners seem to have been the Reid family who were certainly living there by 1907. Early in the 20th century little of the north wall remained standing but the south, east and west walls still stood to a height of around 9.1m with the help of some recent external buttressing.

Today the east wall of the tower survives to a height of 9m with partial returns of the south and, to a lesser extent, north walls. The walls are around 2.0m thick except for at the north-east return where the north wall is around 3.0m thick at the base. A cottage has been built up against the east wall, seemingly built from stone robbed from the tower, and the site now falls within the grounds of Mouswald Lodge Park holiday park.

Mouswald Tower is in the parish of Mouswald and the county of Dumfriesshire.

Proceedings of the Society of Antiquaries of Scotland (Volume 23)

Arthur Stanley Carruthers
London, 1934
Download
Seventh report with inventory of monuments and constructions in the county of Dumfries

John Maitland Thomson
Edinburgh, 1882
Transactions and journal of the proceedings of the DGNHAS (Series III, Volume 47)

Various
Dumfries, 1970
Download
Transactions and journal of the proceedings of the DGNHAS (Series III, Volume 85)