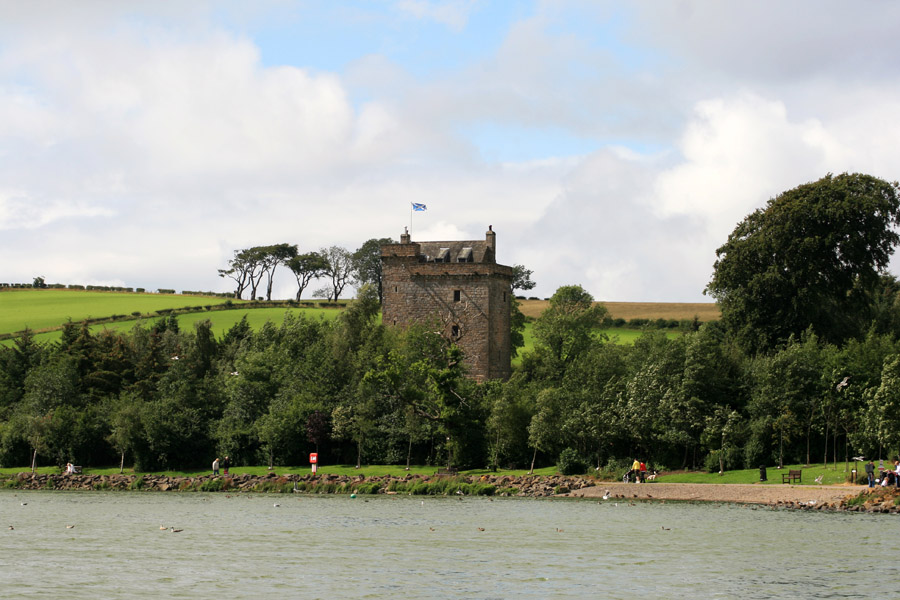 Mains Castle was probably built in the late 15th or early 16th century, and stands in an elevated position on a mound above a small loch known as Crawford’s Hole. 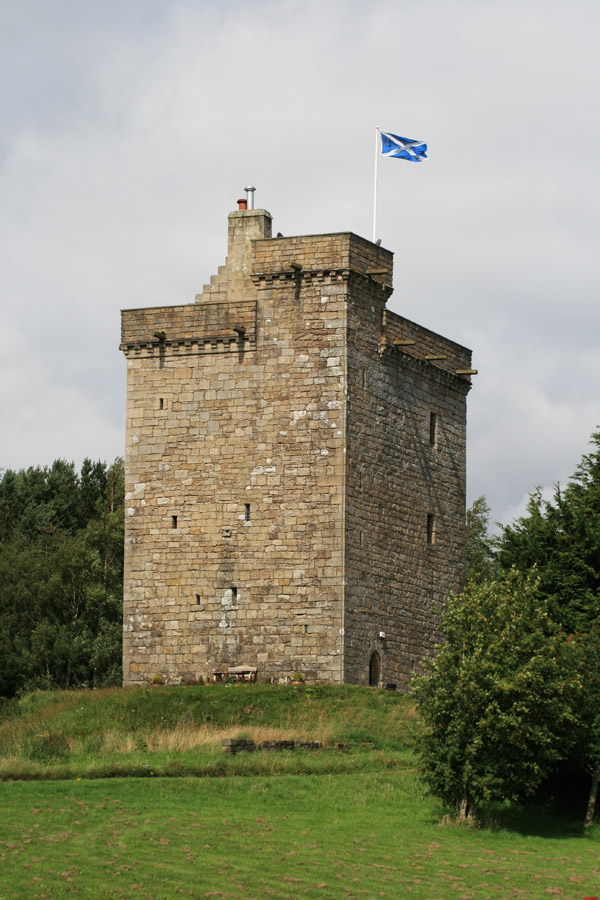 Measuring around 11.6m east-north-east to west-south-west by 8.2m west-north-west to east-south-east, it rises to a height of approximately 12.5m to the top of the parapets, with a garret adding another 3.7m, and stands on top of what is thought to be a motte.

The castle is entered by a low arched doorway at the west side of the south wall, which leads into an intra-mural spiral stair rising the full height of the building and surmounted by a square caphouse.

At ground floor level is a vaulted chamber with a loft level accessed separately from the stair by a passageway, at the end of which is a small trapdoor leading down to a prison within the castle’s wall.

On the first floor is the main hall, with two windows featuring window seats. The second floor was divided into two chambers, most probably bedrooms. Leaving the caphouse gives access to the parapet walk and the garret.

Originally the castle would have been surrounded by a barmkin wall and ancillary buildings, although these are no longer present. The entire site was surrounded by a deep ditch, with access over a drawbridge to the east. The gatehouse for the drawbridge was decorated with a stone carving of the Royal Arms. The ditch and evidence of the drawbridge were apparently still visible in 1793.

The lands of Kilbride were originally owned by the Norman de Valognes family. Upon the marriage of Isabel de Valognes to David Comyn in the early 13th century the estate came into the possession of the Comyn family. The motte of Comyn’s Castle is still visible on the crest of the hill above Mains Castle.

One of their descendants, John Comyn, Lord of Badenoch (the Red Comyn), was the son of John de Balliol’s sister, so naturally he supported Balliol’s claim to the Scottish throne. This put him at odds with the rival claimant Robert the Bruce, and in 1306 John Comyn was murdered by Bruce.

Bruce confiscated the Comyn lands and gave them to his son-in-law, Walter Stewart. In 1382 the former Comyn estates were granted to the Lindsay family by King Robert II, in recognition of the help of the Lindsays in the murder of John Comyn.

In 1619 the castle and estates were sold to the Stuarts of Torrance to pay off debts run up by Alexander Lindsay of Dunrod. With the Stuarts having their main residence at Torrance House, Mains Castle was neglected.

In 1723 the castle had its roof removed, with the slates being used in building work at Torrance House. Around 1743 the carved panel from the drawbridge gate was taken to Torrance House where it was set above the doorway.

In the 1880s the castle was restored, but it was later abandoned once more, and between world War I and World War II the roof was again removed following damage during a storm. It remained an unoccupied ruin until 1976 when a 10 year program of restoration was begun by Mike Rowan, better known as the stilt performer Big Rory.

It is still a private residence today, but is situated on the edge of the James Hamilton Heritage Park.

Where is Mains Castle?

Mains Castle is in the parish of East Kilbride and the county of Lanarkshire.

WIlliam Robertson
Edinburgh, 1629
Buy from AmazonDownload
The History of Rutherglen and East Kilbride

bed and breakfastCambuslang
4.3km away