Kilhilt was a tower house belonging to the Adair family however nothing of it now remains.

William or Ninian Adair of Kilhilt built the Castle of St. John in Stranraer around 1510. Ninian was married to Katherine Agnew, daughter of Patrick Agnew, Sheriff of Galloway and seems to have died by 1520. In 1520 or 1521 Ninian’s son, William, was underage and so some of his inheritance was placed in the care of Gilbert Kennedy, 2nd Earl of Cassilis. Later William would marry the 2nd Earl’s daughter, Helen.

The younger William was succeeded by his son, Ninian. Ninian’s son, also named William, married Rosina MacClellan of Galston, sister of Sir Robert McClellan of MacLellan’s Castle, in 1580 and in the 1590s Ninian’s daughter, Elizabeth, married John Kennedy of Greenan, Creichan and Balneil, natural son of the 3rd Earl of Cassilis. Their son, Gilbert Kennedy of Aryewlane, would marry Helen Adair, grand-daughter of William Adair and Helen Kennedy, around 1603, so cementing the Adairs’ connection with the Earls of Cassilis.

Ninian died in 1608 and is said to have been succeeded by his son, William who died in 1626 having moved to Ballymadoss in County Antrim, Ireland, presumably as part of the Plantation of Ulster. William was succeeded by eldest son, Sir Robert Adair of Kilhilt. Sir Robert’s two sons, William and Archibald, both moved to Ireland and so his daughter Isobel seems to have inherited Kilhilt. Isobel married Patrick Macdowall of Logan around 1649 and died in 1678.

The last remains of Kilhilt were removed around 1933.

Kilhilt is in the parish of Portpatrick and the county of Wigtownshire. 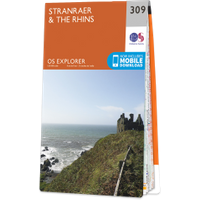 bed and breakfastStranraer
4.3km away

bed and breakfastInnermessan
6.5km away

bed and breakfastCairnryan
11.7km away