There was once a castle at Inverbervie, although nothing of it now remains and its original position is unknown.

The RCAHMS gives vague co-ordinates of NO 83 72 as the exact location is now lost to history. They also separately list a second lost property with the same co-ordinates (Canmore ID 36844), which was also known as Marischal’s Lodging and Arbuthnott’s Lodging, the last remains of which were removed around 1825. This second building was described in the New Statistical Account of Scotland, published in 1845.

….a spacious mansion, surrounded by a high wall, having an arched gateway, in front, of fine workmanship. This edifice, it is said, originally belonged to the Marischal family, and latterly became the property and was the town residence of the noble family of Arbuthnott. No part of the building now remains. It was taken down, and the foundation cleared out, about twenty years ago….

The high wall and arched gateway sound like they could refer to a courtyard wall, while the reference to clearing out the foundations might suggest the removal of a vaulted basement. It is tempting to link these two properties – the original medieval castle and later mansion – as having been on the same site, however the fact is that both sites are unknown.

In 1984 during the renovation of a cottage in Inverbervie (at 4 Cowgate, NO 831 727) an oblong red sandstone slab was found built into the cottage wall. The stone, which measured around 0.8m wide by around 0.35m across, features two simple gun loops around 0.09m in diameter each surrounded by a simple roll moulded decoration. It is believed to still be in the possession of the cottage’s owner.

The position of this cottage, on high ground at the top of the High Street, is interesting as that was a typical location for a medieval castle. The land falls away steeply to the north and east down to the Bervie Water and occupies a fine defensive position.

For this reason I have located the site of Inverbervie Castle in this position until I have researched its history further.

On the south edge of Inverbervie is Hallgreen Castle which is thought to date back to the 14th century.

Where is Inverbervie Castle?

Inverbervie Castle is in the parish of Bervie and the county of Kincardineshire. 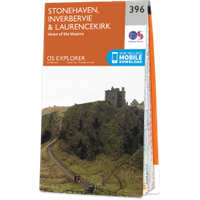 bed and breakfastFerryden
18.7km away