Harden is a largely 17th century house which incorporates the remains of a 16th century peel tower.

Exactly when the first tower at Harden was built is not known, however the property was owned by the Home family in the 15th century and sold to the Scotts in 1501.

In 1576 Walter Scott of Harden, the notorious Border Reiver known as Auld Wat, married Marion or Mary Scott of Dryhope, known as the Flower of Yarrow.

Harden was destroyed, along with Dryhope, in 1592 by Scott of Goldielands following Walter’s involvement in a plot, led by Francis Stewart, 1st Earl of Bothwell, to capture James VI at Falkland Palace.

Some time after 1640 Sir William Scott of Harden bought the old baronial estate of Mertoun from the Haliburton family. Sir William’s son, also Sir William, made Mertoun the family’s main seat and his brother, Sir Gideon Scott of Highchesters, took up residence at Harden.

Between 1680 and 1690 the tower at Harden was extended to the north and east and remodelled. A 17th century sundial from Dryburgh Abbey House stands in the garden to the east of Harden.

Harden was later used as a farmhouse but in the mid-19th century it was restored and is the now the seat of Lord Polwarth.

Harden is in the parish of Roberton and the county of Roxburghshire. 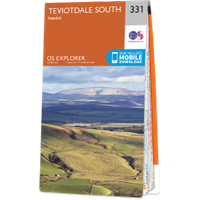