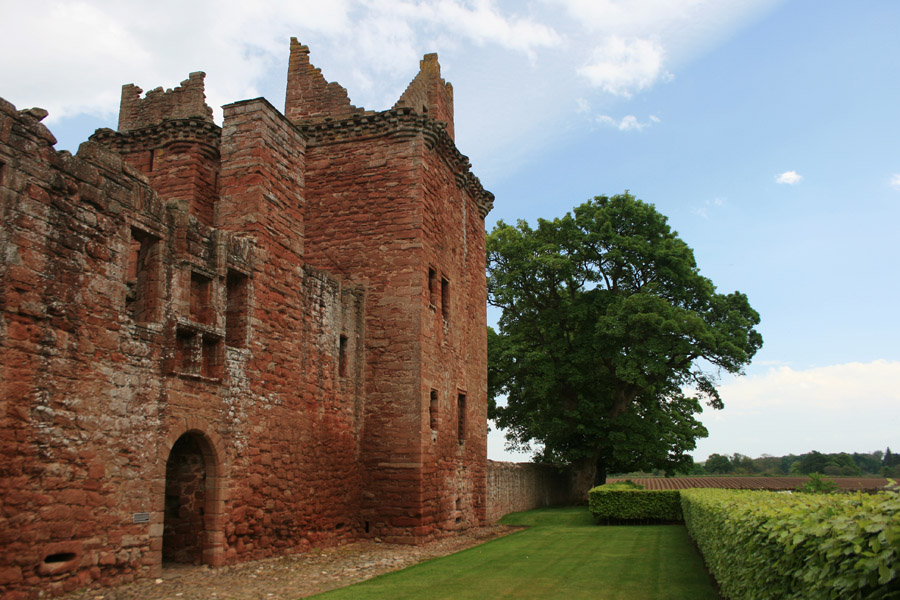 Edzell Castle was built as a modern replacement for the nearby Edzell Castle motte, around 400 metres to the south-south-west, which had been inherited by David Lindsay in 1513.

Lindsay began the construction of his new castle in 1520, starting with a tall tower house, apparently named Stirling’s Tower in honour of his Stirling ancestors. Measuring 13 metres by 10 metres, it has walls some 2.0 metres thick at ground level, and rises to a height of 16 metres. 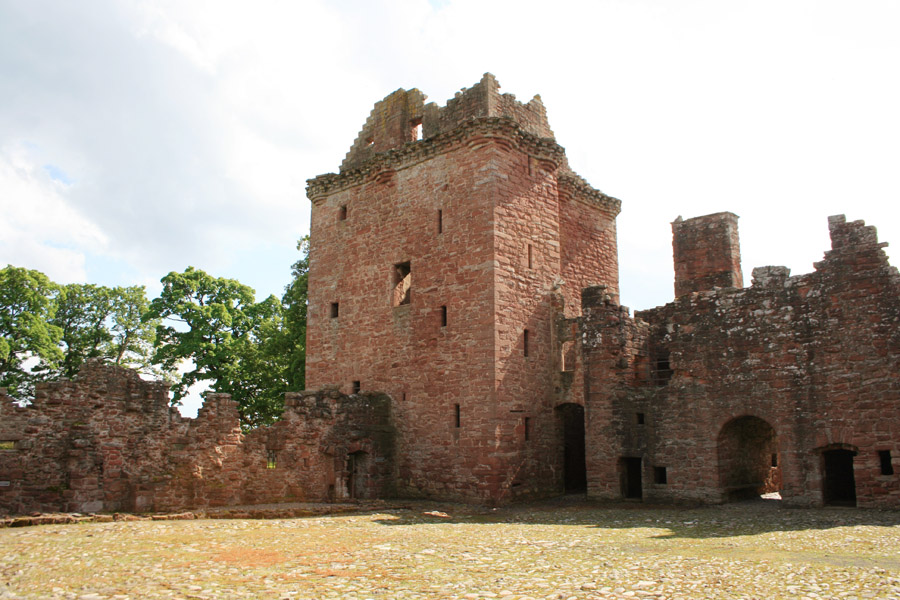 At ground level the tower contains two vaulted chambers, a great hall above, and three further storeys containing a mixture of rooms. A caphouse on the roof completes the structure, with a parapet walk and four round corner towers (no longer visible).

In 1542 David Lindsay became the 9th Earl of Crawford, and in 1550 he added a two storey west range containing accommodation more befitting of his new status. On the ground floor was a kitchen, next to a grand arched entrance giving access to the courtyard within. On the first floor of the new range was a great hall and a drawing room. Later in the 16th century another David Lindsay, the 10th Earl of Crawford, began a north range. The intention was apparently for this wing to stretch right along the courtyard wall, but only the western half of it was completed. The north range contained a second larger kitchen and further private chambers, and features a round tower at the north-west corner. The south wall of this new range has fallen, so it is now open to the courtyard within. 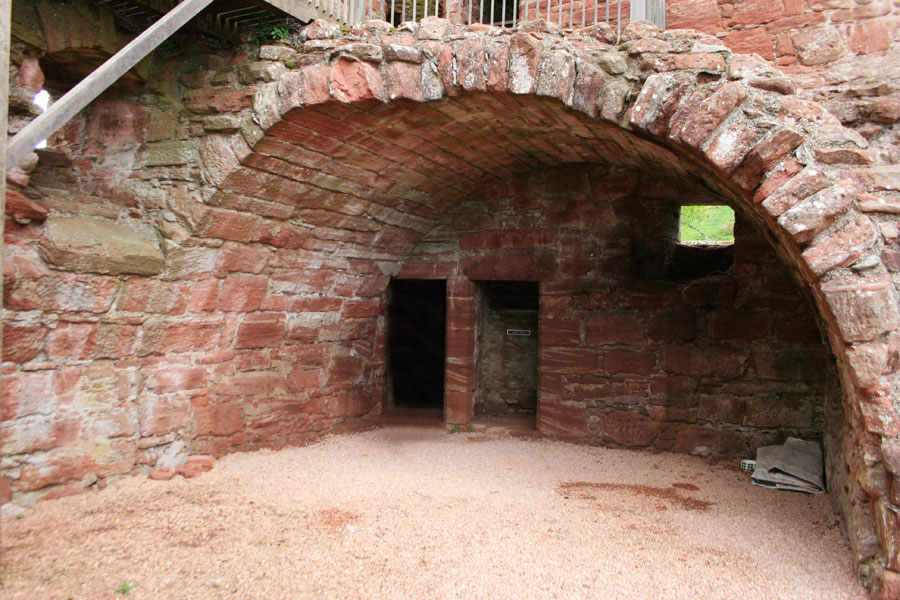 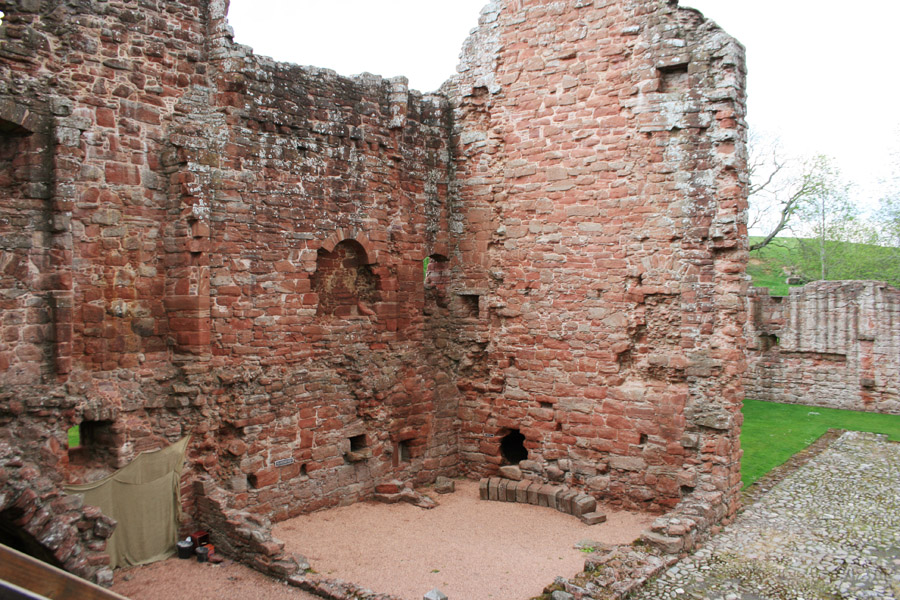 Around 1604 yet another David Lindsay, the 11th Earl of Crawford, began laying out a walled garden to the south of the castle. The 3.6 metre high walls enclose an area measuring 52 metres north-south by 44 metres east-west, and are decorated with numerous carved panels. Niches built into the walls are thought to have housed a variety of plants and nesting birds. 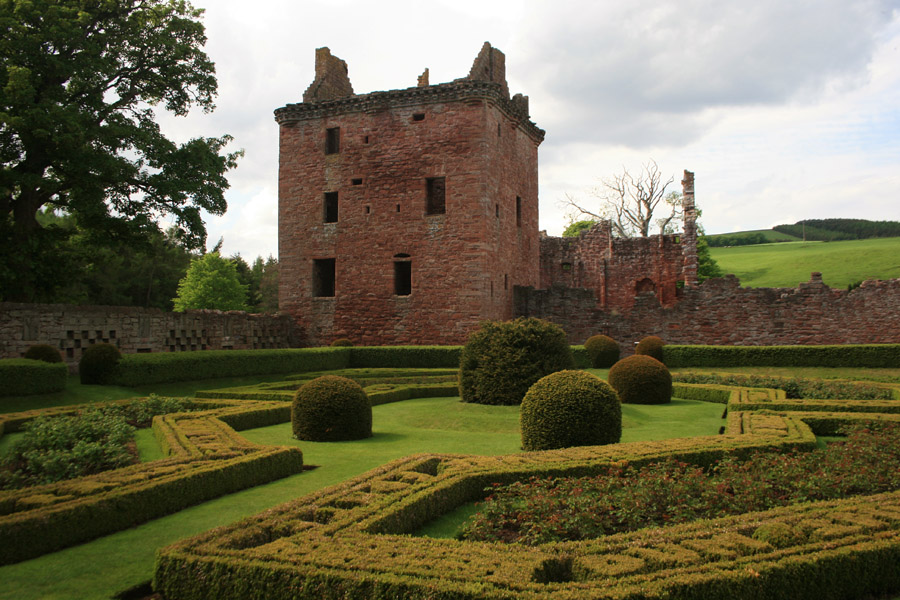 At the south-east corner of the garden is a small two-storey summer house, thought to have been built by the stonemason Thomas Leiper. At the south-west corner are the ruined remains of a bath-house. 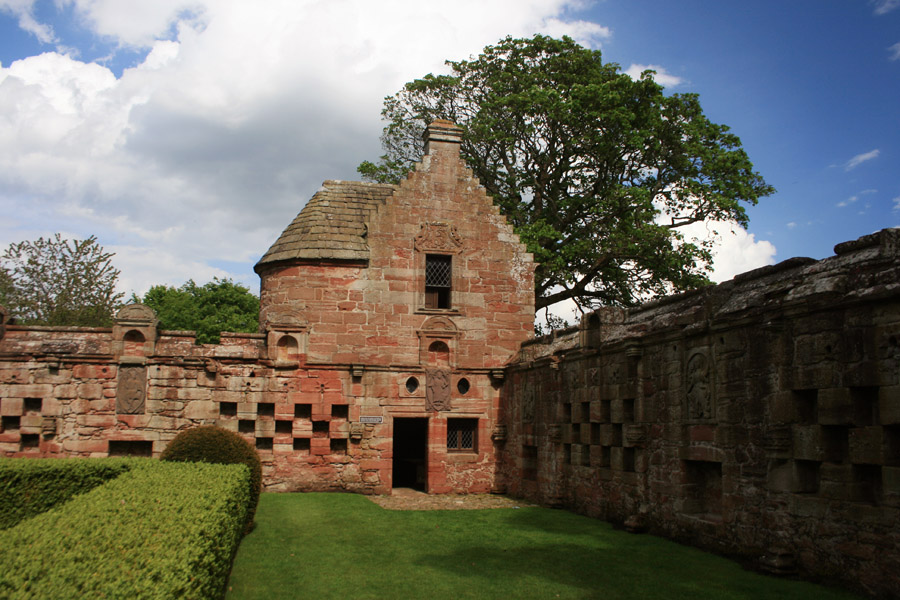 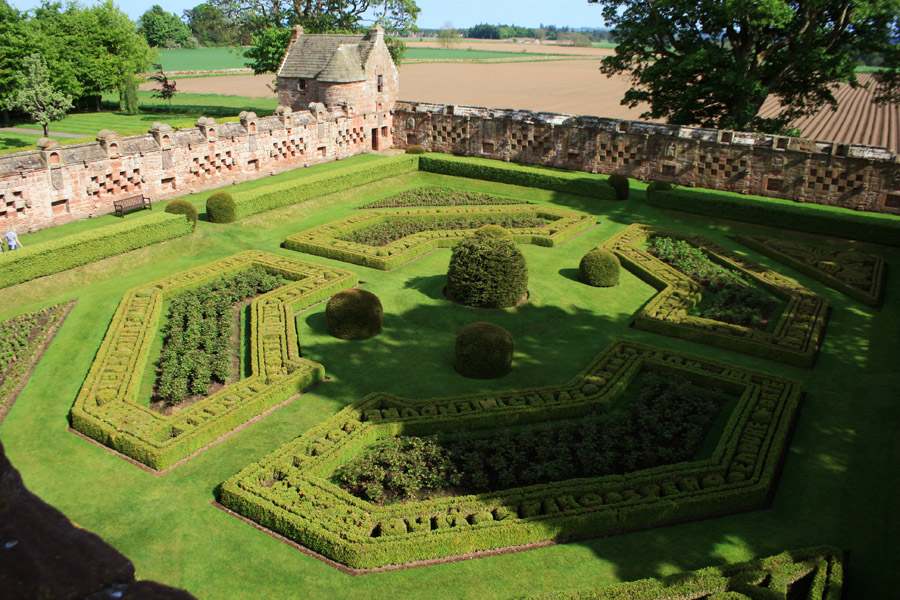 By 1715 the Lindsays had fallen on hard times, and their estates were sold to the James Maule, the 4th Earl of Panmure, for £192,502 Scots pounds (£16,042 sterling). The Earl didn’t posses the lands for long though, as his involvement in the Jacobite Rising of 1715 meant they were forfeited, and Edzell Castle later passed into the hands of the York Buildings Company, who asset-stripped the estate.

In 1746 government troops stayed at the castle, causing more damage, and in 1764 the remaining contents of the castle and the roof were removed and sold to pay the York Buildings Company’s creditors.

William Maule, the 1st Earl Panmure (and the nephew of James, the 4th Earl of Panmure), bought back the estates, but died in 1782 without an heir, and Edzell Castle passed to his nephew, George Ramsay, the 8th Earl of Dalhousie.

The castle remained in the Dalhousie family, although as it was now a ruin they didn’t live there. In the 1870s they employed a caretaker to look after the castle, and in 1935 the castle passed into state care.

Where is Edzell Castle?

Edzell Castle is in the parish of Edzell and the county of Angus.

bed and breakfastBrechin
8.9km away

bed and breakfastFerryden
17.1km away