Dunskellie Castle was a tower belonging to the Irving family in the late 12th century but nothing of it now remains.

In December 1593 Sir James Johnstone of Lochwood and Dunskellie led a force of Johnstones, Irvings and others who met the Maxwells at Dryfe Sands and inflicted a decisive defeat, with John Maxwell, 8th Lord Maxwell, dying in battle. Since Maxwell was Warden of the Marches and considered the King’s representative the Johnstones were forfeited and Dunskellie was destroyed.

John Maxwell, 9th Lord Maxwell, shot and killed Sir James Johnstone of Dunskellie in 1608 and was forfeited in 1609 as a result.

A two storey laird’s house was built on the site of the castle, possibly incorporating the remains of the older building. This house was incorporated into the larger mansion of Cove House in 1844.

Dunskellie Castle is in the parish of Kirkpatrick-Fleming and the county of Dumfriesshire. 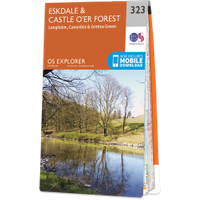 bed and breakfastGretna Green
5.9km away

bed and breakfastGretna Green
5.9km away

bed and breakfastGretna Green
6.0km away