Around the end of the 14th century the MacNaughtons arrived in Glen Shira from nearby Loch Awe, and are thought to have built a castle on small promontory at the south-west corner of the Dubh Loch.

Dubh Loch Castle stood on a low rocky mound, around 2.0m high and forming an oval of around 21.0m by 15.0m. The surrounding ground is marshy and at high tide the mound becomes an island.

In the past the castle would have been permanently cut off from the shore, and indeed on Argyll Estate maps from the 18th century it shows the castle mound as an island. Due to 18th century improvements of the loch’s outflow into the Gearr Abhainn, the promontory on which the castle site now stands was created.

Not much is known about the castle except that it is thought to have been built around the mid-14th century, and is said to have been abandoned following an outbreak of plague, probably in the mid-16th century, the surviving MacNaughtons moving to Dunderave Castle.

All that remains to be seen on site now are grass-covered mounds.

Where is Dubh Loch Castle?

Dubh Loch Castle is in the parish of Inveraray and the county of Argyll. 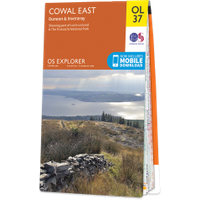 bed and breakfastKilchrenan
13.8km away

bed and breakfastCarrick
17.1km away