Drumcoltran Tower is a 16th century tower house built by the Maxwell family.

Around 1161 the lands of Kirkgunzeon were granted by Uchtred of Galloway to the monks of Holmcultram Abbey in what was then Cumberland, now Cumbria. In 1319 Robert the Bruce attacked the Abbey and Kirkgunzeon became a Crown possession. In 1367 David II granted the lands to Sir John Herries of Terregles.

When Sir John Maxwell, second son of Robert Maxwell, 5th Lord Maxwell, married Agnes Herries, daughter of William Herries, 3rd Lord Herries of Terregles, in 1550 the superiority of the lordship of Kirkgunzeon passed from the Herries family to the Maxwells of Caerlaverock. It is thought to have been Sir John and Agnes who built Drumcoltran Tower soon after and it became the seat of the barony of Kirkgunzeon.

The original tower is thought to have been a simple rectangle in plan, measuring approximately 10.4m east to west by around 7.9m north to south, with walls some 1.3m thick. Interestingly it has slightly rounded corners rather than the more normal square edges. It has been suggested that this was due to a lack of stone suitable for cutting dressed corners. Currently the tower consists of three storeys plus a garret however it isn’t known how tall the original tower was. The vaulted ground floor is divided into two chambers, the easternmost of which was the kitchen and the other smaller one a store room.

On the first floor was the Great Hall at the east end of which was a wide fireplace flanked by arched wall recesses. The fireplace was later partially blocked and a smaller fireplace inserted.

The second floor was divided into two chambers each with its own garderobe and fireplace, the one at the east end also featuring a bed recess and wall-safe.

A projecting stair tower was added later, possibly around 1570, to the west end of the north side of the tower. It measures around 4.7m east to west by 2.5m north to south and rises to a height of four storeys creating an L-plan layout. A new entrance was created in the re-entrant angle, protected by a wide squared gunloop. Above the door is an empty niche for a heraldic panel and above that is a panel carved with a Latin inscription which translates as “Keep hidden what is secret; speak little; be truthful; avoid wine; remember death; be pitiful”.

At the top of the stair tower is a small caphouse which would have served as a watch-chamber. At third floor level a small spiral staircase within the re-entrant angle gives access out onto the corbelled parapet, with commanding views of the surrounding countryside.

George’s son, Edward Maxwell, sold Orchardton to Robert Maxwell, eldest son of Robert Maxwell of Spottes, around 1640. Edward’s son, John Maxwell of Drumcoltran, was included in a list of “enemies to religion, crown and country” in 1644 due to his support for James Graham, 1st Marquess of Montrose, in the Wars of the Three Kingdoms.

In 1668 the mortgaged estate was bought by John Irving of Bonshaw, a bailie of the burgh of Dumfries, and the Maxwell line ended when John Maxwell died in 1679 leaving no sons but two daughters. Drumcoltran passed through John’s son, also John, to his grandsons, Christopher and Thomas, who died without issue. Their sister, Agnes, who inherited in 1750 was married to Major John Maxwell, styled of Cardoness from 1752.

In the 18th century a two storey farmhouse was built to the west of the tower which was originally connected by a 1.5m wide passage. The interior of the tower was also remodelled at a similar time. A window on the ground floor was turned into a doorway to give access to the passage to the new farmhouse and most of the tower’s windows were enlarged. The Great Hall was split into two rooms with the grand fireplace being reduced in size and a second fireplace added at the opposite end of the hall. Parts of the Great Hall’s fireplace surround were reused in the kitchen on the ground floor. Some sources state that it was the Irving family who carried out this work while others state that it was the Maxwells.

It has been suggested that the farmhouse may have actually incorporated a 17th century accommodation block or outbuilding which would have butted up against the inside of the courtyard wall, in a similar arrangement to that found at another Maxwell property nearby, Hills Tower.

Drumcoltran then passed into the Hynd family, possibly by marriage. A John Hynd of Drumcoltrane died in 1779 and his widow, who died in 1789, was a Mrs Nicolas Maxwell. Later it passed to the Heron family and a James Heron of Drumcoltran, senior, died in 1832. In 1875 Drumcoltran returned again to the Maxwell family.

The tower was used to house servants for the farm and the ground floor was still occupied in 1900 although it was abandoned soon after. In 1911 the tower was visited by the Royal Commission on the Ancient and Historical Monuments of Scotland and found to be in a dilapidated state. It was designated as a Scheduled Monument in 1928 and taken into state care in 1949. It later underwent restoration by what was then the Ministry of Public Buildings and Works which included the rebuilding of the parapet.

In 1990 the farmhouse was reduced to a single storey and the connecting passage removed. The castle is now cared for by Historic Environment Scotland and is free to visit throughout the year.

Drumcoltran Tower is in the parish of Kirkgunzeon and the county of Kirkcudbrightshire. 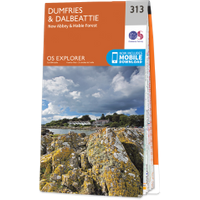 H.C. Lawlor
London, 1906
Download
An introduction to the history of Dumfries

Geoffrey Stell
Edinburgh, 1996
Buy from Amazon
Fifth Report and Inventory of Monuments and Constructions in Galloway

Chris Tabraham
London, 1997
Buy from Amazon
The Annandale family book of the Johnstones, Earls and Marquises of Annandale (Volume 1)

Nigel Tranter
Edinburgh, 1965
Buy from Amazon
Transactions and journal of the proceedings of the DGNHAS (Series III, Volume 74)

bed and breakfastDalbeattie
8.4km away

hotelOld Bridge of Urr
10.4km away

bed and breakfastCastle Douglas
11.9km away