Cramalt Tower consists of a pair of late 15th century tower houses, the ruins of which are now submerged beneath the water of the Megget Reservoir.

The towers stood enclosed within a glen on the east bank of the Cramalt Burn just north of its confluence with the Megget Water. Although standing almost on the valley floor it was a site of strategic importance occupying a position on two major routes between the Upper Yarrow valley and Upper Tweeddale.

The south tower is thought to have been built in the third quarter of the 15th century. Slightly smaller than its near neighbour, it was of a more sophisticated construction. A slightly skewed rectangle on plan, it measured 10.67m NNW to SSE by 8.08m ENE to WSW. The north, south and west walls varied in thickness between 1.60m and 1.7m while the east wall was 2.34m but incorporates two intramural chambers which reduced the outer thickness to just 0.51m.

The entrance was near the east end of the south wall and gave access to a vaulted basement. Immediately to the right after entering a spiral staircase at the south-east corner of the tower lead up within the thickness of the wall of the entrance passage. The basement featured a barrel vault reaching a maximum height of around 5.03m above the floor level and was divided into two floors with a wooden entresol supported on corbels. The only light source for the basement was a splayed slit window in the lower level west wall with a corresponding slit above lighting the entresol level. At the west end of the lower level north wall was an aumbry.

The staircase gave access to a vaulted intramural chamber in the south half of the east wall, measuring 1.96m long by 1.35m wide, which is thought to have been a storeroom. To the north of this chamber was a second one, also vaulted, which is thought to have been a pit prison measuring 1.98m long by 1.35m wide. Above the prison at entresol level was a vaulted guardroom with a hatch in the floor giving access to the prison below, an arrangement common in 15th century castles. The configuration and number of floors above the basement vault is not known but it is likely that it rose to a height of three or four storeys.

The tower may have had earlier origins, local tradition stating that it was the seat of the Meggets of that Ilk. The earliest Megget on record is Randulfus de Meggate around 1200. In the 13th century Sir John de Haya / de la Haya / de la Haye, brother of William de Haya of Errol, married Margaret, daughter and co-heiress of Robert de Lyne, and acquired the barony of Locherworth and various lands in Peeblesshire from his father-in-law.

It may have been via his wife that the Hays came to be in possession of the lands of Cramalt, which were owned by Sir David Hay of Yester by 1462 and were almost certainly in the family’s possession earlier. It is therefore likely that the south tower was built by the Hays.

Some 22.25m to the north of this tower is a second one which is thought to have been built around 1490 or slightly later. It measured 11.28m NNW to SSE by 8.75m ENE to WSW with walls 1.52m thick at the gable ends and 1.75m on the sides supporting the basement’s vault. The basement was vaulted and a spiral staircase within the thickness of the walls at the south-east corner gave access to the upper floors where the walls were also 1.52m thick.

The original entrance was in the south wall immediately to the west of the staircase. The staircase was entered via the chamber of the basement rather than directly via the entrance. The basement consisted of a single chamber measuring 8.23m long by 5.26m wide. The vaulting started at 1.07m above the floor level and rose to a height of 3.20m. The basement seemingly had no other openings besides the entrance. There may have been one in the west wall although not enough of it remained when the tower’s ruins were studied to reach that conclusion.

Little of the first floor survived to suitably describe its design or layout, but traces of splayed windows were observed in the west and south walls. The window in the west wall was offset considerably perhaps suggesting it was located to the left of a fireplace although this is conjecture. There is evidence that the tower rose to a height of at least three storeys and may have had a fourth in the way of a garret.

The first mention of a tower comes in 1530 when James V visited although this is not unusual as buildings weren’t always specifically mentioned in documents at that period. James V used the tower regularly as a hunting lodge, it being within the vast royal hunting ground known as the Ettrick Forest. Mary Queen of Scots stayed at Cramalt with Lord Darnley on the 16th of August 1566 during a hunting trip to Meggetland.

The north tower seems to have still been occupied at the end of the 17th century at a time when the Scotts of Buccleuch seem to have obtained some kind of title over Meggetland. Walter Scott, 1st Earl of Buccleuch, married Lady Mary Hay, daughter of Francis Hay, 9th Earl of Errol, in 1616. Walter’s granddaughter, Anne Scott, later 1st Duchess of Buccleuch, was served heir to the lands and barony of Meggit, including the lands of Cramalt, following the death of her sister, Mary, in 1661.

However the Hays were still in possession in 1686 when John Hay, John Hay, 2nd Earl of Tweeddale (and later 1st Marquess), was forced to sell all of his Peeblesshire properties to settle debts. Cramalt was bought by William Douglas, 1st Duke of Queensberry, and given to his second son, also William, 1st Earl of March. Cramalt remained a possession of the Earls of March until the death of William Douglas, 4th Duke of Queensberry, 3rd Earl of March, in 1810. The 3rd Earl was succeeded in title and ownership of Cramalt by his second cousin twice removed, Francis Wemyss Charteris Douglas, later 8th Earl of Wemyss. Cramalt remained in possession of the Earls of Wemyss and March.

At some point in history the whole of the south-west corner of the south tower collapsed, bringing down the adjacent part of the south wall, possibly due to insufficient foundations built on alluvial soil. By 1775 the site is marked on Armstrong’s map as ruins, with a new farm complex on the west bank of the Cramalt Burn. The lands in and around Cramalt were tenanted by the Anderson family for around 300 years until 1910, by which time a 19th century farmhouse had been built to the east of the farm on the burn’s west bank and a lodge had been built on the east bank to the north of the towers.

By the 1960s the gable ends to the west and east had fallen and the north and south walls remained standing to a height of around 4.6m and 4.0m respectively. In 1974 work began on the Megget Reservoir Dam with the construction of a dam at the east end of the glen and between 1977 and 1979 archaeological investigations were carried out on the towers. Before the dig began only the north tower was known about.

The glen was subsequently flooded, covering the ruins of Cramalt Tower, and the reservoir was officially opened on the 30th of September 1983.

Cramalt Tower is in the parish of Yarrow and the county of Selkirkshire. 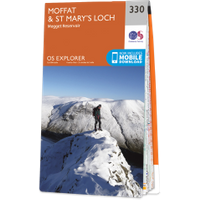 A History of the Border Counties: Roxburgh, Selkirk, Peebles

George Douglas
Edinburgh, 1899
Buy from AmazonDownload
Proceedings of the Society of Antiquaries of Scotland (Volume 111)

bed and breakfastInnerleithen
18.4km away