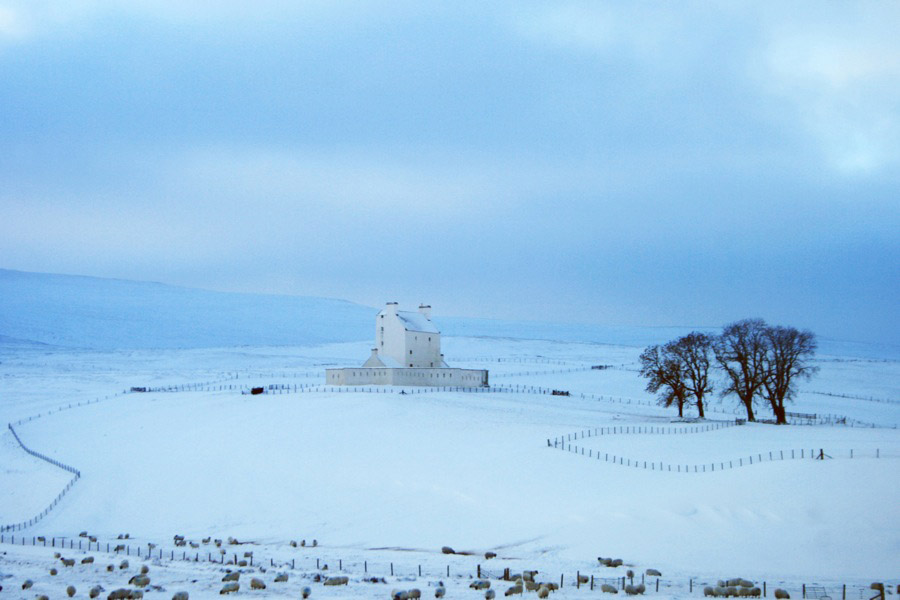 Corgarff Castle seems to have been built in the mid-16th century by the Elphinstone family, probably Robert Elphinstone, the 3rd Lord Elphinstone. It occupies a strategic position on a main mountain route from south to north, on an elevated site close to the headwaters of the River Don. It is at a high altitude compared to most other castles, being some 427m above sea level.

In some versions of the early history the castle is said to have been built as a hunting lodge by the Thomas Erskine, the Earl of Mar, in 1537. However in 1537 the Earl of Mar was John Erskine, with the only Thomas Erskine being the 2nd Lord Erskine and de jure 14th Earl of Mar who died in 1494. In any case, the Earls of Mar lost the lands of Corgarff (along with their title) when they were annexed by King James I in 1435.

The Forest of Corgarff and other Mar lands were granted to Alexander Elphinstone, later the 1st Lord Elphinstone, by James IV on the 10th of December 1507. No mention was made of a castle at this time, nor in a follow-up charter of 1513. When Alexander’s grandson Robert, later the 3rd Lord Elphinstone, was granted the lands of Corgarff by his father to celebrate his marriage to Margaret Drummond of Innerpeffray, the charter, dated the 3rd of September 1546, again makes no mention of a castle.

On the 4th of September 1546 a sasine was given, making Corgarff a separate property for the first time. So it was likely that Corgarff Castle was built some time after 1546 to house the future 3rd Lord Elphinstone.

Later in the 16th century most of the Corgarff property passed into the hands of the Forbes of Towie, who had married into the Elphinstone family. Another version of the castle’s history has John Forbes of Towie building Corgarff Castle in 1550, although it seems more likely that Robert Elphinstone built it, possibly in 1550.

The castle is a rubble-built tower, measuring approximately 10.9m east to west by 7.5m north to south, and is 10.0m high to the eaves. The walls are approximately 1.8m thick.

Originally the castle consisted of a basement level with two vaulted cellars, above which was a vaulted main hall. At the east end of the first floor was a low, vaulted kitchen with a small vaulted mezzanine level above it. On the second floor was a non-vaulted storey divided into two chambers, and above that a garret.

The entrance was at first floor level and would have been reached by wooden steps. A stone staircase in the kitchen gave access to the cellars below, and to the floors above.

The castle has had a turbulent history, having been burned in 1571 during a feud between the Forbes and the Gordons. In 1607 it was broken into and occupied temporarily by local bandits. In 1626 Corgarff Castle returned to the Earls of Mar, with John Erskine, the 18th Earl of Mar, acquiring the castle from the Elphinstone family.

When the castle was occupied by James Graham, the 2nd Marquess of Montrose, in June 1645 it was said to be in ruins, but it seems to have been rebuilt some time afterwards as in 1689 or 1690 the castle was burned by Jacobites to prevent it from being used by Government soldiers.

During the Jacobite Rising of 1715 Corgarff Castle was used as a rendezvous point towards the end of August by the Earl of Mar while marching from his ancestral home of Kildrummy Castle to Braemar Castle, where the Royal Standard was raised on the 6th of September. Following the Jacobites’ defeat, Corgarff was forfeited and the Government returned it to the Forbes family.

Thirty one years later Corgarff Castle featured in the second Jacobite Rising when it was used as a weapons store by the Jacobites. On the 2nd of March 1746 the castle was raided by Government troops and the weapons and ammunition destroyed or taken away.

After the Battle of Culloden the castle was bought from the Forbes of Skellater by the Government and used as an outpost of Braemar Castle. In 1748 it underwent numerous architectural changes to make it ready for its new life as a Government garrison.

Small one storey wings were added to the east and west sides of the main tower, probably as accommodation for officers, and the upper floors of the tower were converted into barracks for the soldiers. The vaulting and mezzanine level on the first floor were removed and a new floor inserted, making the top half of the main hall into the new second floor.

The most striking alteration, and the one for which the castle is most famous, is an eight-pointed star-shaped curtain wall which was built around the castle, with many slits to allow the castle’s occupants to fire their muskets at every conceivable angle.

A garrison remained at Corgarff Castle until 1802, when it began to be used as a farmhouse or hunting lodge. In 1827 the Government bought the castle again and reinstalled the garrison to deal with local whisky smuggling and production. In 1831 the army left for good, and the castle deteriorated while being used as accommodation for farm labourers. The last inhabitants were two sisters with the surname of Ross. They left during the First World War.

In 1947 Sir Edmund Stockdale, later the Lord Mayor of London, bought the surrounding Delnadamph estate, but by this time Corgarff Castle was a ruin. They placed it into state care in 1961, and the castle was restored to as it was in 1750.

The Stockdales transferred ownership of the castle to the Lonach Highland and Friendly Society in 1979, and it is now run by Historic Scotland.

Where is Corgarff Castle?

Corgarff Castle is in the parish of Strathdon and the county of Aberdeenshire. 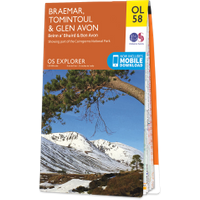 Castle of Badenyon (site of)

bed and breakfastBallater
16.8km away

bed and breakfastBallater
16.9km away

bed and breakfastKinord
19.9km away

hotel, restaurantGrantown on Spey
29.3km away