The bastle is thought to have been built in 1611, as a carved date stone has been installed in an adjacent later wing. It also carries the initials “HF” and either “IV” or “JV”. However it is marked on Pont’s late 16th century map, possibly as a small tower. 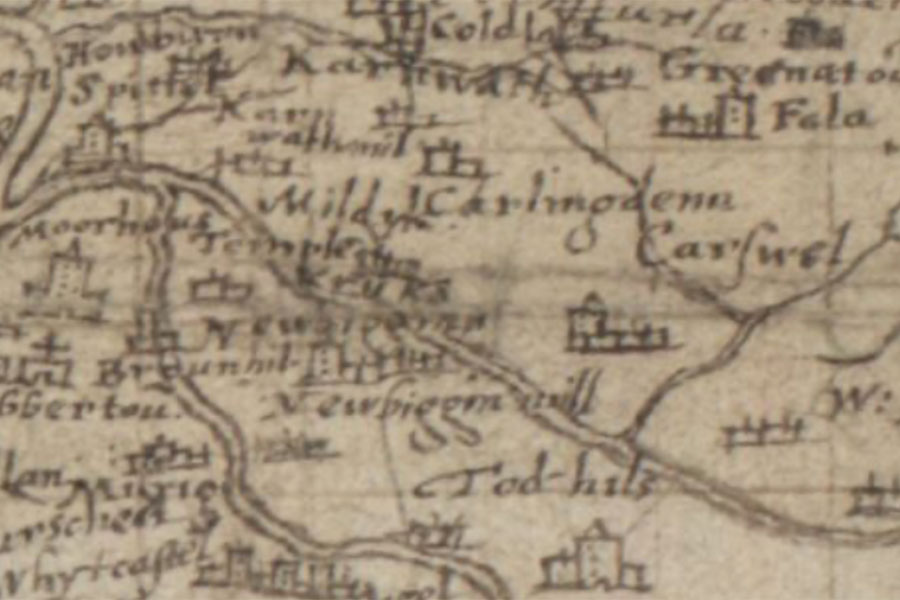 Today it is sandwiched between a farm steading to the west and a later house to the east (both built some time before 1858), but it would originally have been a freestanding rectangular block aligned east to west. The walls were clearly built for defence, the north, south and east walls being some 1.1m thick, while the west gable wall is thinner at 0.6m.

The ground floor may originally have been vaulted, however no trace of a vault now remains. There was an entrance at ground level, in the middle of the north wall, which was 1.0m wide although this has been widened for modern use to 1.2m. To the right of this door is a blocked up window slit which would have allowed some light into the ground floor.

Above this doorway was the main original entrance, at first floor level, which was accessed via an external stone staircase, the platform being supported by two stone pillars. The staircase and pillars have been removed, possibly in the 1970s or 1980s, and the doorway converted into a window.

At first floor level the west gable wall is 0.65m thick, as are the north and south walls, however the east gable wall retains its ground floor thickness of 1.1m. There are three small windows, probably original, in the south wall, measuring around 0.5m wide by around 0.75m tall. In the north wall there is one original window just below the roof line, measuring 0.4m wide by 0.65m tall. It was originally secured by a vertical iron bar.

Where is Carnwath Mill?

Carnwath Mill is in the parish of Carnwath and the county of Lanarkshire.

bed and breakfastWest Linton
16.6km away

bed and breakfastWishaw
19.2km away