Bothwell Castle is a magnificent ruin guarding a strategic crossing on the River Clyde, and dates back to the 13th century.

The barony of Bothwell was granted by King David I to his godson, David Olifard, possibly as a reward for having saved the King’s life at the siege of Winchester Castle in 1141. Olifard built a motte as the seat of the barony. When David Olifard’s grandson, Walter Olifard, died in 1242 the lands passed to the Murray family, Walter’s daughter having married Walter de Moravia in the first half of the 13th century.

Walter de Moravia was the first of his family to use the title of Bothwell, and set about building a huge castle at Bothwell around 1.9km west of the motte. The castle was actually planned to be around twice the size that it is today, but due to the onset of the Wars of Independence beginning in 1296 a smaller castle was constructed. 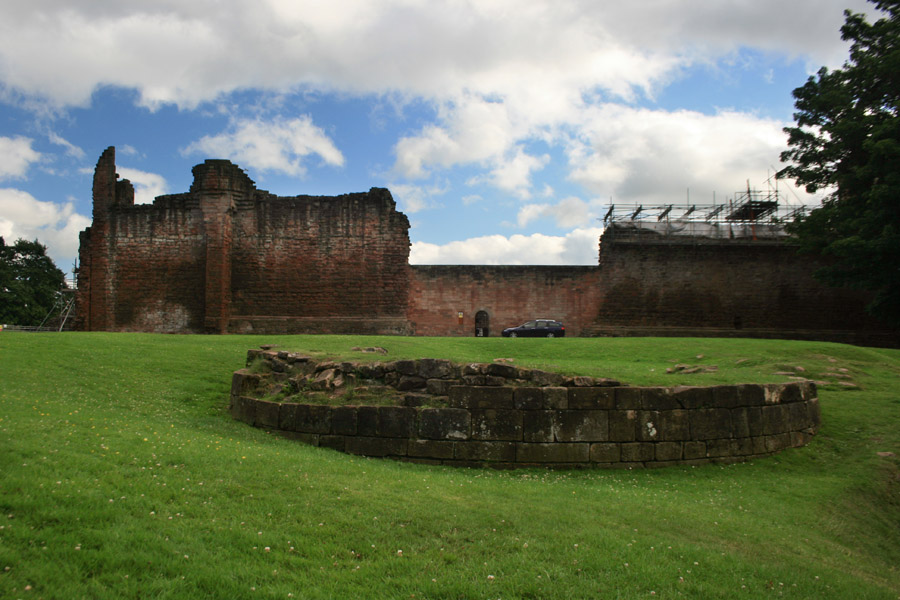 Although half its planned size, Bothwell Castle is actually a rather large structure and is dominated by a huge round donjon measuring some 20m in diameter and 30m in height, with walls around 4.6m thick.

This tall tower consists of four storeys, each of which has one eight-sided room with arched windows. Above the basement level was the great hall on the first floor, above which was a secondary hall, and at the top the lord’s private chamber. 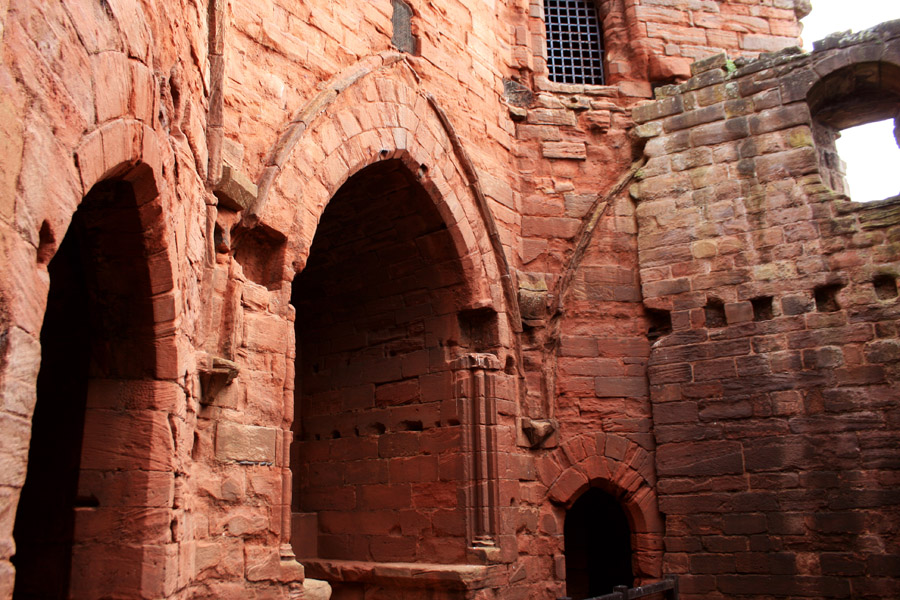 Extending from the donjon to the south-east is an oblong block of further accommodation, with a narrow round tower at the end of it which contained a prison. Around the base of the donjon was a moat which was crossed by a drawbridge.

The donjon stands on a rocky outcrop above the RIver Clyde, and was built from stone quarried away from this base, which had the added effect of increasing its defensive position. 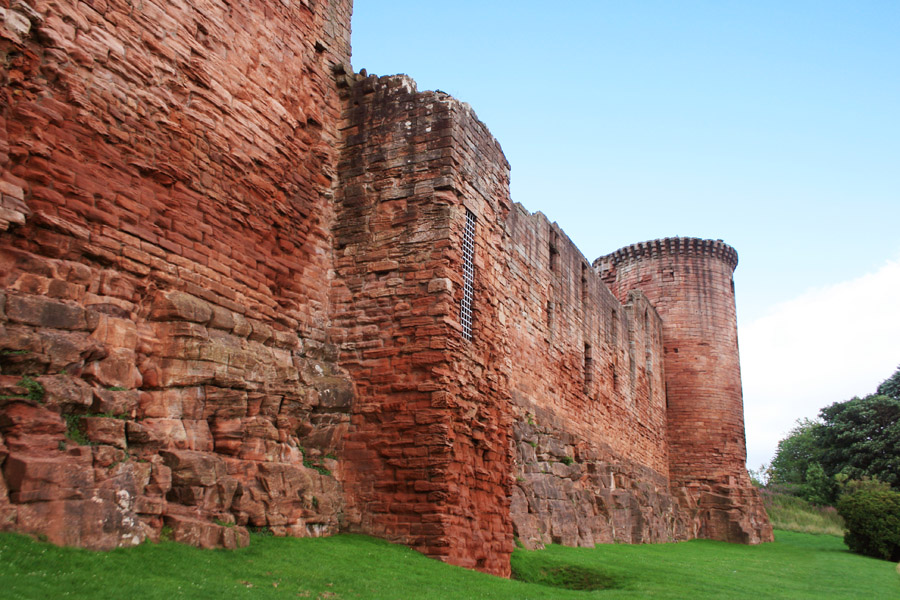 In 1296 Bothwell Castle was captured by Edward I of England, and over the next 40 years it changed hands between the Scots and the English several times, suffering many sieges. When Sir Andrew Moray, the rightful heir of Bothwell, recaptured the castle from the English in 1337 he ordered that the donjon should be destroyed to stop it from being used again by English invaders, and the west side of the tower was pulled down and left unoccupied. 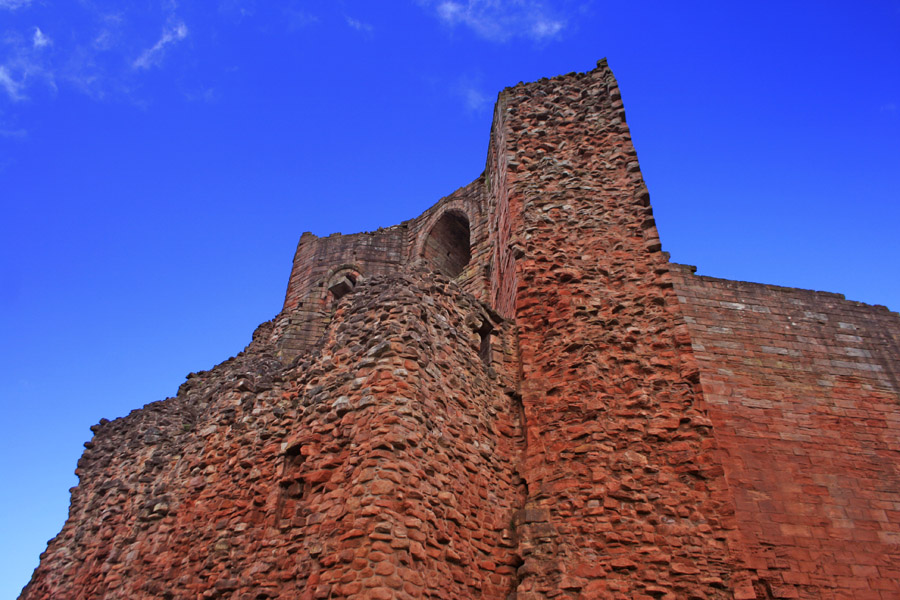 In 1362 Joanna Moray of Bothwell married Archibald Douglas (later the 3rd Earl of Douglas and Lord of Galloway) who started to rebuild the castle. Rather than reconstruct the entire donjon, a wall was built through the middle of it making use of the still standing eastern half.

Douglas extended the castle to the east, constructing a smaller round tower at the south-east corner of the site, most probably on the foundations of one of Walter de Moravia’s planned external towers, mirroring the foundations of a round tower at the north-east corner which can still be seen today. Douglas died in 1400 and was succeeded by his son, also Archibald Douglas, the 4th Earl of Douglas, who continued his father’s building work.

To the north of the round tower was built a square tower at the north-east corner (not as far as the planned 13th century round tower) and between the two towers was built a new great hall and a chapel. These two new towers were connected to the donjon by a curtain wall, with a large gatehouse midway along the north wall. The gatehouse has now gone, and in its place is a visitors’ centre.

The rebuilding of Bothwell Castle was completed by 1424, but in 1455 the Douglas estates were forfeited following a dispute with James II. His son, James III, granted Bothwell Castle to William Crichton, the 3rd Lord Crichton, but he forfeited in 1484 and it was given to Sir John Ramsay on the 24th of February that year, Ramsay being created the 1st Lord Bothwell.

Following the death of James III in 1488 Ramsay worked as a spy for Henry VII of England, and was paid to deliver the young King James IV to the English court. This led to the forfeiture of his estates and title, and on the 13th of October 1488 James IV granted Bothwell Castle to Sir Patrick Hepburn, the 2nd Lord Hailes, and created him the 1st Earl of Bothwell.

In 1661 another Archibald Douglas was created the 1st Earl of Forfar, and began building himself a new mansion nearby. Bothwell House, also know as New Bothwell Castle, used stone from the square north-east tower, which marked the end of Bothwell Castle as a residence. Bothwell House was demolished in 1926 as a result of mining subsidence, and a golf course now occupies its site.

When the 1st Duke of Douglas died in 1761 without an heir, his titles and lands should have passed to James Hamilton, the 7th Duke of Hamilton, a descendent of William Douglas, the 1st Marquis of Douglas and 11th Earl of Angus.

However the Duke of Douglas had been persuaded to name Archibald Stewart of Grandtully, his nephew by his sister, Lady Jane Douglas, as his heir, despite controversy over whether or not young Archibald was Lady Douglas’s natural born son. The Hamiltons unsuccessfully fought the succession in court in a case which became know as the Douglas Cause.

Archibald Stewart changed his surname to Douglas upon his succession, and through him are descended the Earls of Home who continued to own Bothwell Castle until 1935 when it was placed into state care.

Where is Bothwell Castle?

Bothwell Castle is in the parish of Bothwell and the county of Lanarkshire.