The estate of Aldbar was owned by the Cramond family as early as the 13th century. However by the mid 16th century they were in financial difficulties, and the estate passed from “John Cramon” to John Lyon, the 8th Lord Glamis, around 1575. John Lyon gave the estate to his second son, Sir Thomas Lyon, who is thought to have built Aldbar Castle, a four storey tower house, around 1580.

Additions may have been made in the 17th century as the castle is said to have had a stone carved with the date 1649. Having passed through the Sinclair and Young families, the estate was bought by one William Chalmers in 1753, and it would remain in the Chalmers family from this point forwards.

Between 1844 and 1854 Patrick Chalmers made extensive Scots Baronial additions to the old castle, changing the appearance considerably. But in 1964 Aldbar Castle was destroyed by fire, and the remains demolished in August of that year.

Nothing now remains on the site of the castle, which stood around 200 metres north-east of the Mains Farm steading. A 19th century gateway can still be seen at the entrance to the property.

Aldbar Castle is in the parish of Aberlemno and the county of Angus. 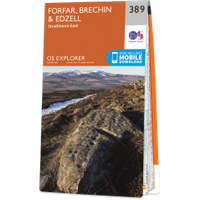 Andrew Jervise
Edinburgh, 1861
Buy from AmazonDownload
The Baronage of Angus and Mearns

bed and breakfastBrechin
3.1km away

bed and breakfastFerryden
14.1km away