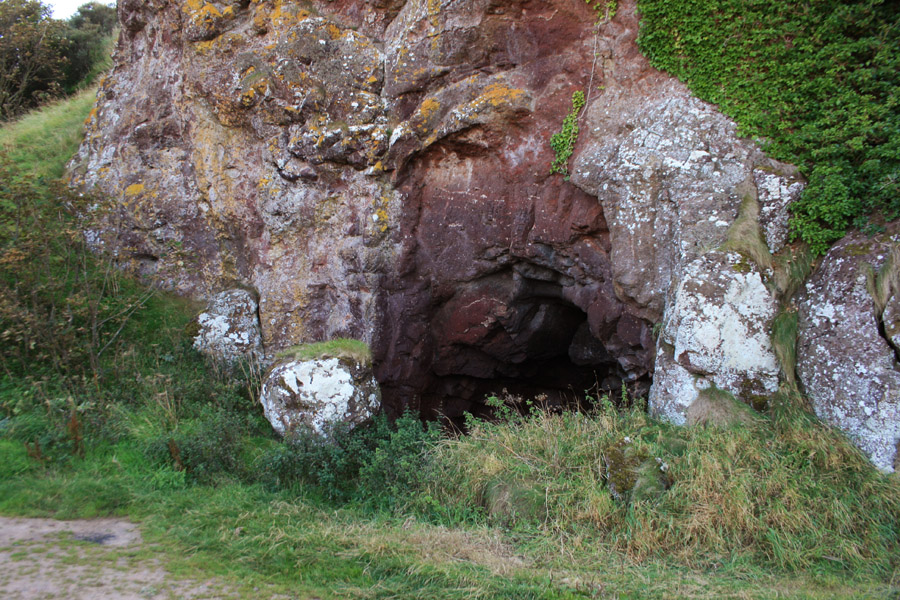 St Baldred’s Cave is a small cave at the foot of a rocky cliff above Seacliff Beach. It was discovered in 1830 when the owner of Seacliff House, George Sligo, removed drifts of sand which had filled the cave.

At the mouth of the cave was a large flat-topped rock which seemed to have been used as an altar, it’s surface coated with charcoal. Inside the cave he found a layer of bones and charcoal some 0.3 to 0.6m deep. The bones consisted of animal (including some from a horse) and remains, with the skeletons of two children. A bone knife was also found, along with fragments of Early Iron Age pottery.

One suggestion is that the cave was the site of animal and human sacrifices as part of some kind of ceremonial rites.

Legend has it that St Baldred, an 8th century hermit and abbot, lived for a time in the cave, hence the name. However this seems unlikely, and many places in East Lothian are named for St Baldred. He may have founded a monastery nearby at Tyninghame House.

Where is St Baldred's Cave?

St Baldred's Cave is in the parish of Whitekirk and Tyninghame and the county of East Lothian.

bed and breakfastNorth Berwick
5.1km away