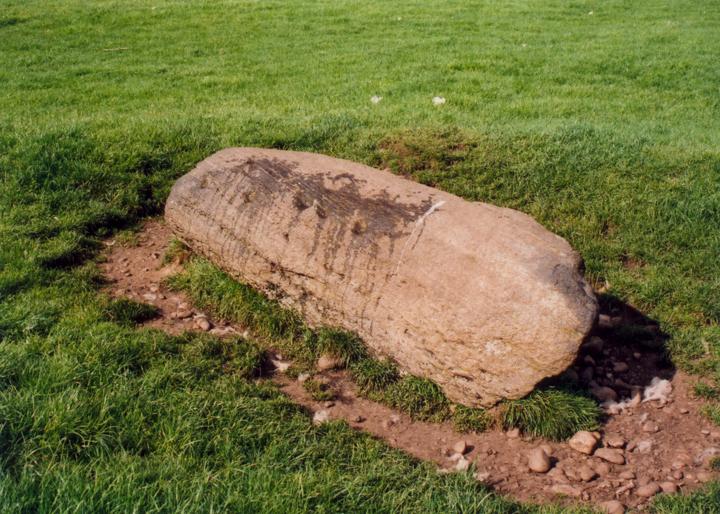 This cup-marked stone lies on top of a cairn in a field full of interesting things – nearby is a cup-marked stone, a long cairn, a medieval moated site (once thought to be a Roman camp) and a pair of standing stones.

The cairn was excavated in 1884, and found to consist of a pile of small stones overlaid with earth to a diameter of around 9m. Close to the base of the cairn, and S of the centre, fragments of human bone were found underneath two small flagstones. The cairn has a flat top to it, which is 5.50m in diameter, and rises to a height of 0.75m. Around the central cairn is a ditch which varies in width from 2.75m to 4.20m, and is 0.70m deep. Around this is a low bank 0.90m wide.

The stone lies on the cairn’s flat top, but it is believed that it once stood upright here. On it’s W side are 9 large cup-marks, while there is a further single cup-mark on it’s N end. It has been mistakenly reported that in 1838, this stone was actually close to the two Bridge of Lyon stones. However it appears that this is as a result of some confusion, as the New Statistical Account actually describes the Bridge of Lyon stones as “two obelisks, the one about 6 feet high: the other lying on the ground, having been undermined some fifty or eighty years ago”.

The name of the cairn, Uaigh an t-Seanalair – the General’s Grave – is supposed to refer either to Pontius Pilate or his father. There is a legend in Fortingall that Pontius Pilate was born here to a local mother and a Roman father.

Where is Lyon Bridge?

Lyon Bridge is in the parish of Fortingall and the county of Perthshire.

bed and breakfastAberfeldy
5.2km away