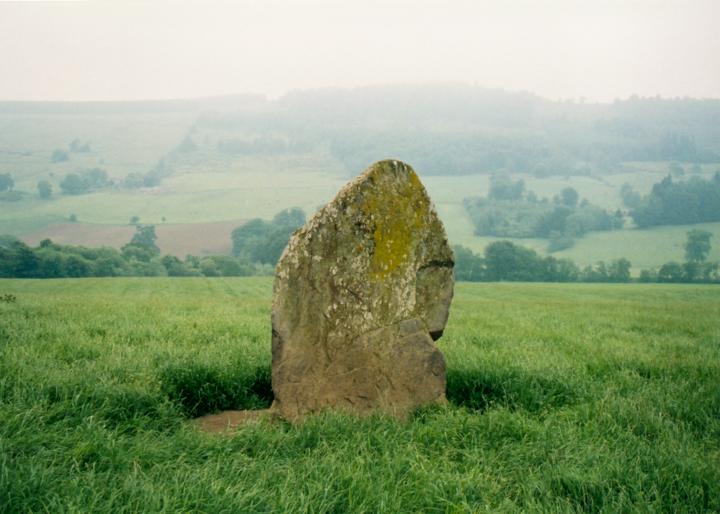 Above ground, this site appears to be a solitary standing stone, albeit an impressively large one. However, a combination of ploughing and excavation in the late 1960s and early 1970s revealed this to be the visible remains of an archaeologically interesting area. Two further stones lie buried to the E of the standing stone, at distances of 7.80m and 12.15m, aligned E-W. Close to the eastern boundary of the field, again buried, are three further stones arranged in an arc that would suggest a circle of around 9.0m in diameter, just to the S of the E-W alignment.

Around 1887, a cist was uncovered near the standing stone, and was found to contain a food vessel, which made its way to the museum at Blair Castle. Coles described it as being “found in a cist in the haugh near Tom-na-Croiche, which is the name of the ground at the standing stone.” In 1969, John McBeth, the farmer at Balnaguard, found a short cist while ploughing 12.0m to the NW of the stone, at the highest point of a slight rise (visible at the left of the photo above). Upon excavation, the cist was found to have a partially-cobbled floor. Several finds, including an upturned beaker sitting on sand in one corner, are now in the National Museum. The cist was filled in, and the cover stone now lies at the edge of the field (NN 9455 5205).

In 1971, further excavations took place. The earth around the base of the standing stone was removed to a depth of 0.25m, revealing 7 cup-marks on the S face. Another cup-mark was found on the prostrate stone closest to the upright one. The three buried stones in an arc at the field boundary (NN 9468 5209) were found to be set amongst apparent cairn material of fist-sized smooth stones, covering an area of 6.10m by 3.65m. This was under a layer of 0.25m of plough soil, and was itself 0.3m deep, resting on the sandy subsoil of the field. Under the NE section of these stones the subsoil was found to have dark stains, and produced some cremated bone, carbonised wood, and a small rim sherd possibly from a food vessel. Further S from this area, a thin flat slab of 2.3m length was also found. No socket was found, so it is possible this may have been a cist cover.

Where is Clach na Croiche?

Clach na Croiche is in the parish of Little Dunkeld and the county of Perthshire.

Clear sky
Weather observed at Milton of Edradour at 04:57

Pitlochry Past and Present