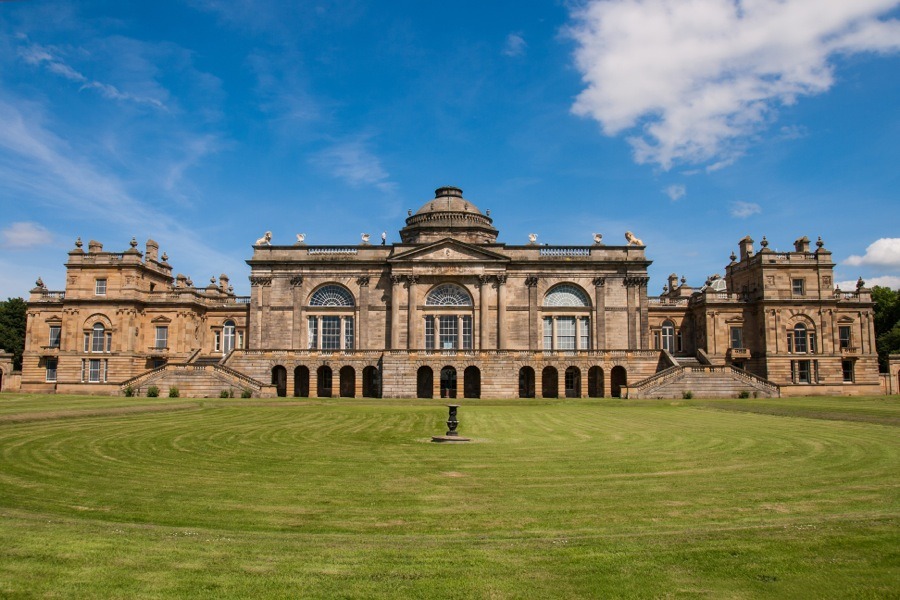 Walking around Gosford House and gardens

The sun was shining today so we took a trip out to East Lothian, stopping for a picnic lunch at Aberlady Bay Local Nature Reserve. 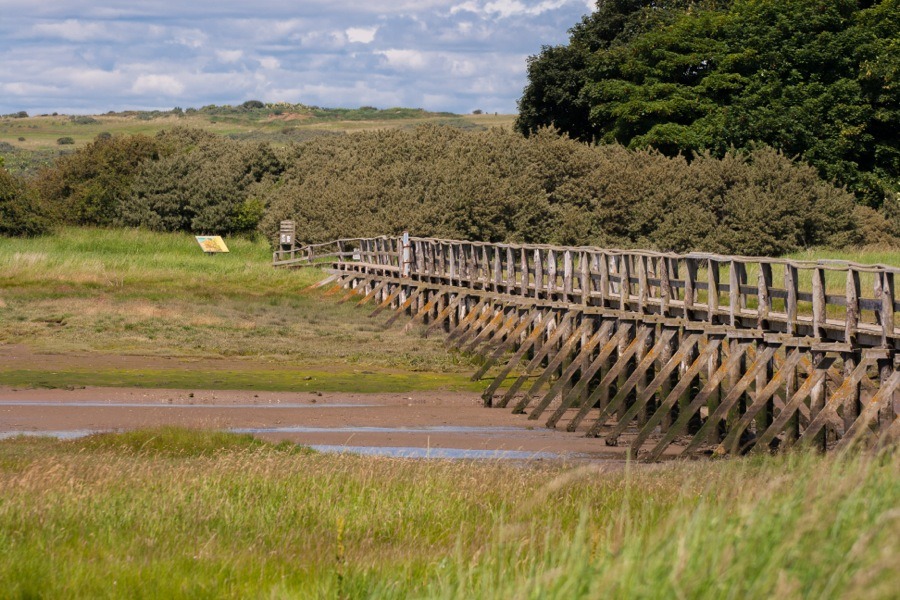 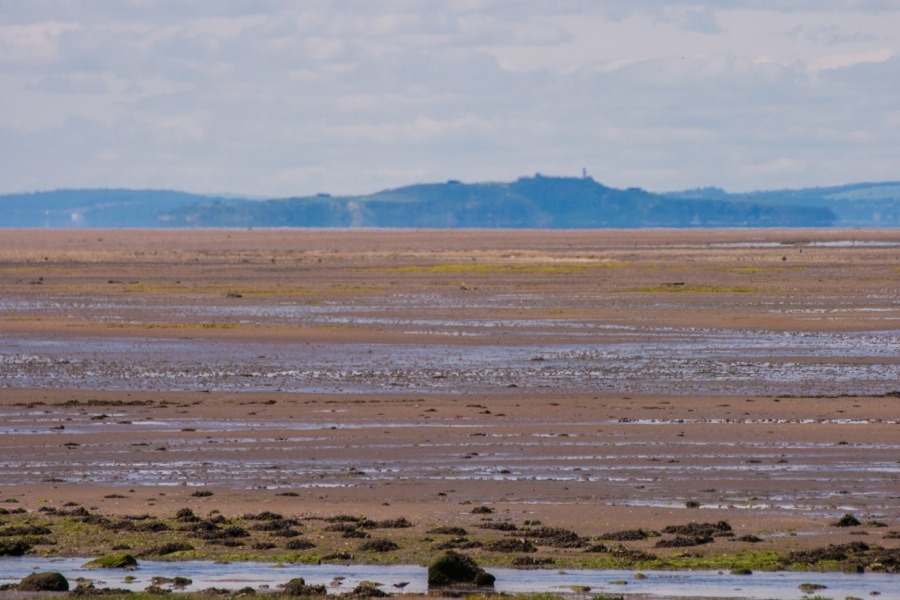 The entrance to the estate is via a track leading from the Gosford Bothy Farm Shop along the edge of the old walled garden. With the sun beating down we were glad for the shade provided by the trees.

After following a couple of tracks on the map of the estate we were provided with we came out into a large walled clearing, at the centre of which was an intriguing pyramid structure.

Built around 1795 for Francis Charteris, the 7th Earl of Wemyss, at a cost of some £1073, it has niches inside for 64 coffins but holds only the body of the Earl himself. The pyramid is dripping with Freemason symbolism as the Earl was Grand Master Mason of Scotland.

Leading away from the mausoleum, past the twin sculptures depicting the Scythian Skinner of Marsyas, is one of the main driveways.

We noticed a pretty daisy-covered track leading into the trees but opted instead for the driveway, under the baking sun, as we set off in search of Gosford House itself.

After a long walk down the drive we reached a ha-ha, then followed a tarmac road curving around in front of the house. House seems like a poor description for such a lavishly designed structure, which borders on the palatial.

Designed by the celebrated architect Robert Adam it was built for the 7th Earl between 1790 and 1800, only finally being completed 8 years after Adam’s death.

Adam’s original design included a pair of monumental wings but these were knocked down by the 8th Earl and replaced with new wings in 1891 by the 10th Earl.

Carved below the huge central pediment are the 7th Earl’s name, title and the date 1800.

Standing on the top of the house are a pair of lion and a pair of swan sculptures. A Gosford employee passed by and told us that, as luck would have it, the lefthand (northern) lion had just been installed that very morning. The swans were also relatively new additions, joining the old righthand lion which had stood for years alongside three empty plinths.

In fact work was still being done to secure the new lion.

As we walked around to the south end of the house a buzzard flew overhead being pursued by a crow. 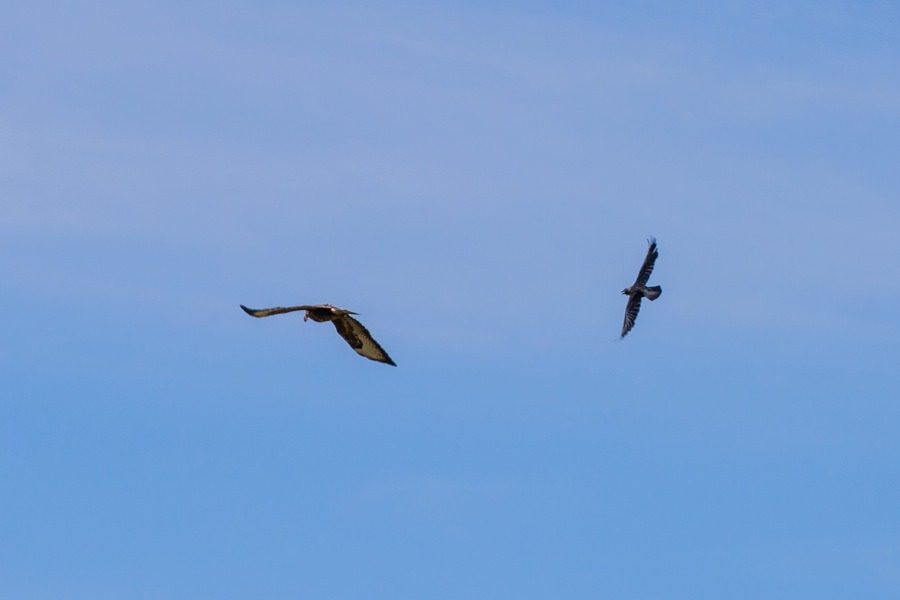 Interestingly the entrance into the house is on the south end of the building off a small courtyard.

Flanking the entrance into the courtyard are more lion sculptures, including this friendly looking fellow.

Being so close to the sea it’s not surprising to see that some of the red sandstone has succumbed to the elements.

Passing through a gate in the courtyard wall leads onto the lawn in front of the house, which is arguably the best place from which to admire it.

The lawn is edged with a low wall which snakes its way around the perimeter, separating the neatly-cut grass from the longer variety on the other side.

We walked around to the back of the house which is perhaps less impressive then the front but still incredibly grand.

Perched on top of the house is another swan sculpture, the swan being part of the arms of Clan Wemyss.

Across the back garden of the house is something I was most interested in seeing, the site of Old Gosford House. It is no longer standing but once stood where the trees are now in this photo, to the right of the old stables.

Within the trees is a pair of low mounds which look like they consist of building rubble. These may be the last remains of the old Gosford.

Various decorated pieces of stonework can be seen on top of the mounds, including this stone with a carved edge.

Immediately behind the stables is a pond, the first in a series of ponds surrounding an “almost island”.

Flying around the banks of the pond, and skimming across the surface of the water, were dozens of bright blue dragonflies. 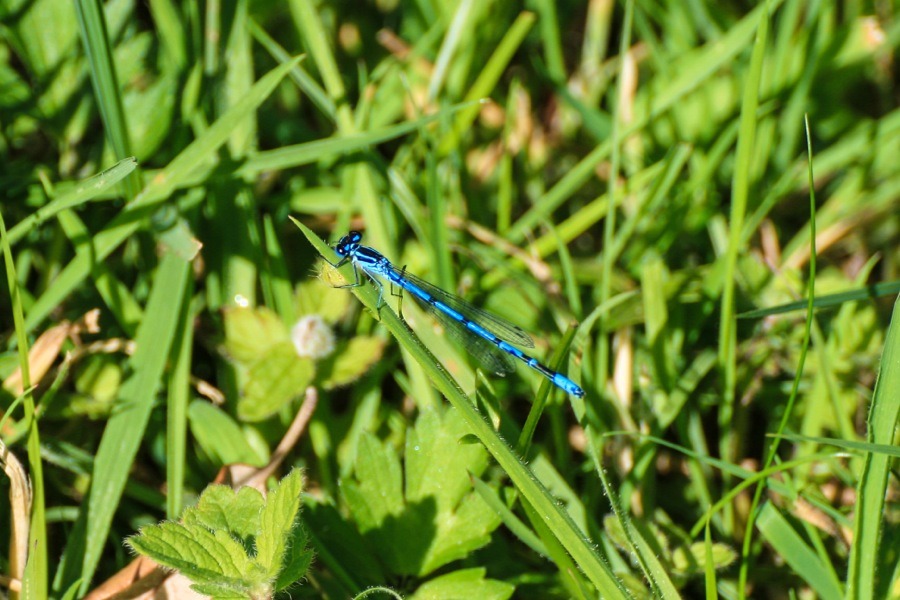 Part of this particular pond was covered in lily pads, illuminated in the glorious sunlight.

We found ourselves on the “island” at this point, having crossed onto it via a land bridge, so we walked around the perimeter to the north. Through the trees we spotted a clearing in which around ten herons were sunning themselves. It’s something I’ve never seen before, having only seen a maximum of three herons together. 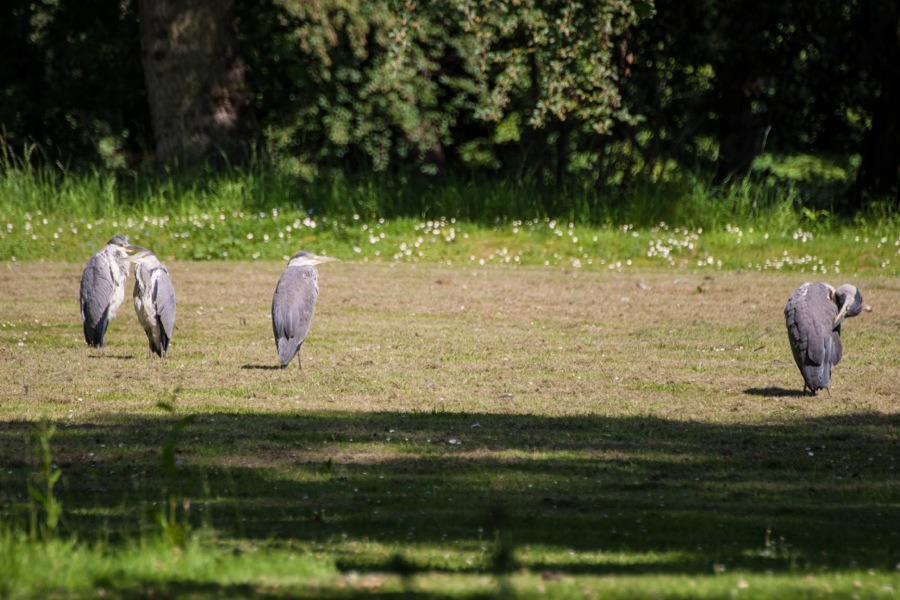 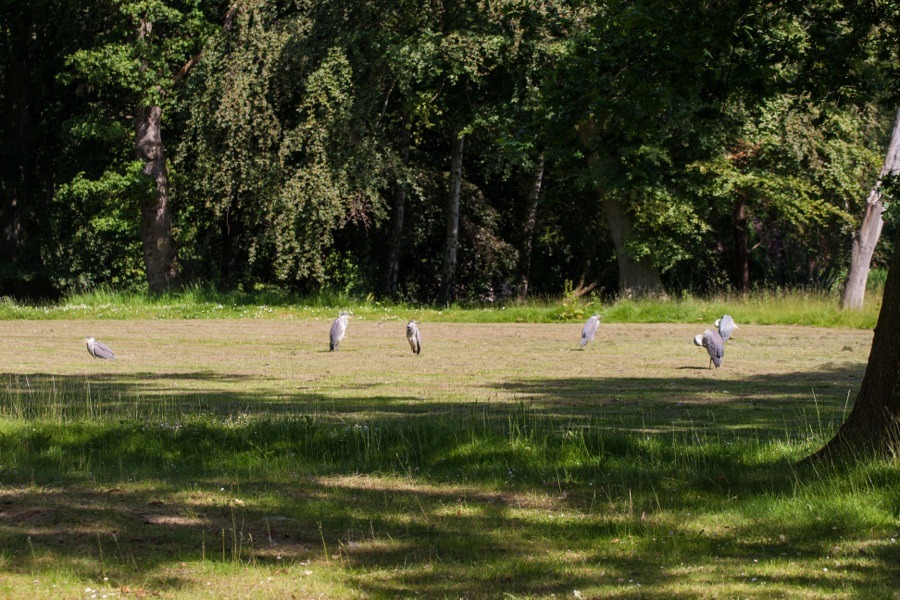 After watching this remarkable sight for some time we eventually moved off, quietly, and as we did so the herons took flight. We made our way around the north end of the island and later, up in the trees above us, we heard a bit of a commotion and noticed some of the herons had relocated to their nests. 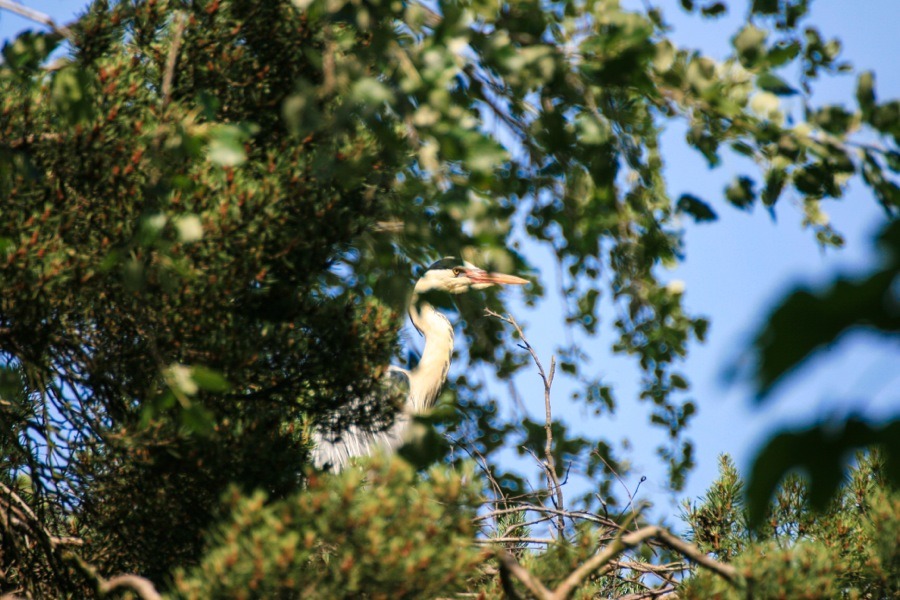 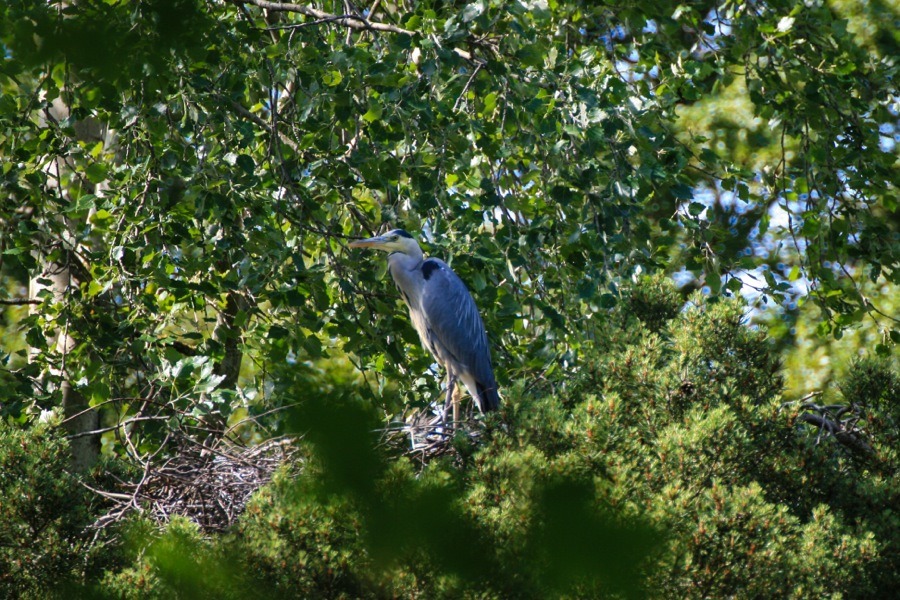 At the north-east corner of the pond is a large boat house.

A short distance away to the north is what is variously described as a grotto or icehouse but is in fact a rare surviving example of a curling house which, as its name suggest, was used for storing curling equipment.

Having done a couple of slow circuits of the pond we followed a track past this gnarled yew tree on our way back to the Gosford Bothy Farm Shop where we bought some bread before heading off.

We didn’t get far though, stopping at Longniddry Bents from where Gosford House can be seen poking out from the treetops in the distance.