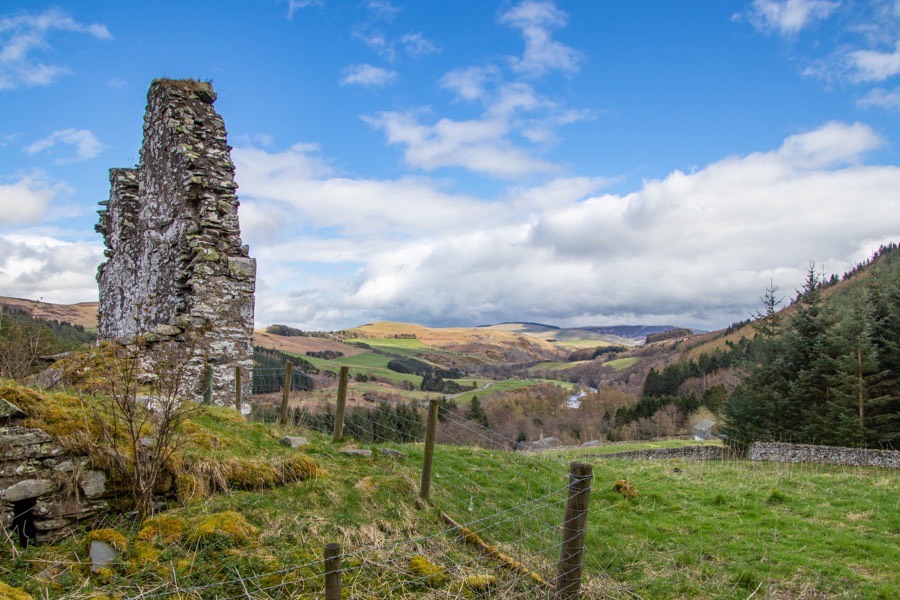 Last weekend we headed down into the Borders on a grey day in search of a bit of easy walking and some history.

We ended up around halfway between Peebles and Galashiels and made our first stop at Thornielee in the Tweed Valley Forest Park. The original plan was to head up the hillside on the way-marked trails until we could see the ruins of Elibank Castle on the opposite side of the River Tweed. As we reached the car park, elevated slightly from the road, the castle ruins came into view but soon after a rain shower moved down the valley and obscured the view.

It wasn’t looking too hopeful in terms of views so instead of walking the Cairns Trail up into the forest we did the low level Meadow Trails to stretch the legs then got back in the car and drove down to Ashiestiel Bridge to cross the Tweed and return back along the other side of the valley. As we rounded a corner on the undulating single track road Elibank Castle came into view.

We were spoiled from our viewpoint with not only the castle ruins, but across the valley the beautiful house of Laidlawstiel.

The present house looks to be largely 19th century in style but may incorporate earlier work as it is marked on a mid-17th century map as a tower named Lodlastesl.

The view between these two old houses, west along the Tweed valley past the car park we had just come from, was also quite special in that understated Borders way with the rolling hills providing the backdrop to the wooded valley. 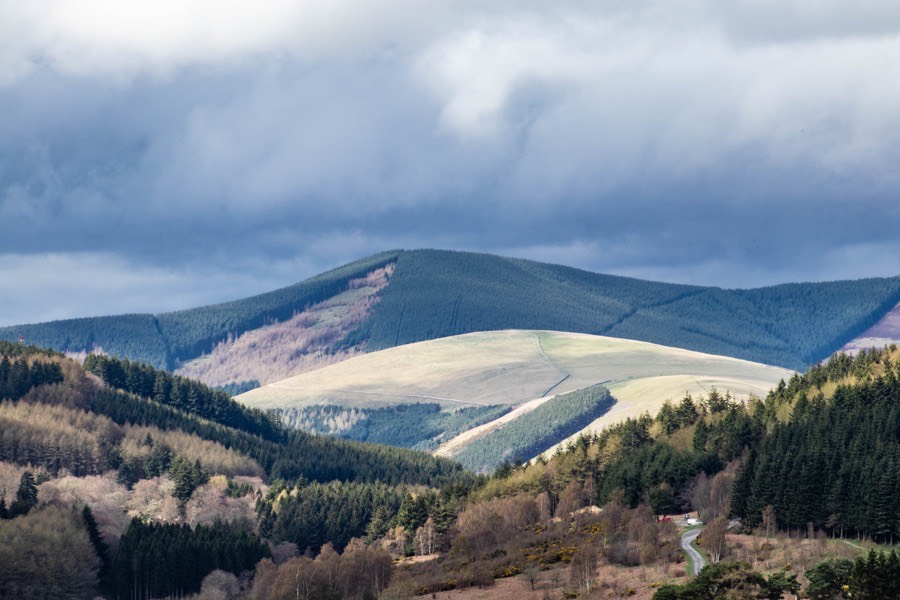 A short distance further on we parked at the bottom of a forestry track and started climbing up through the forest, the rain giving way to sun, the light dancing through the trees and lighting up the mossy forest floor. 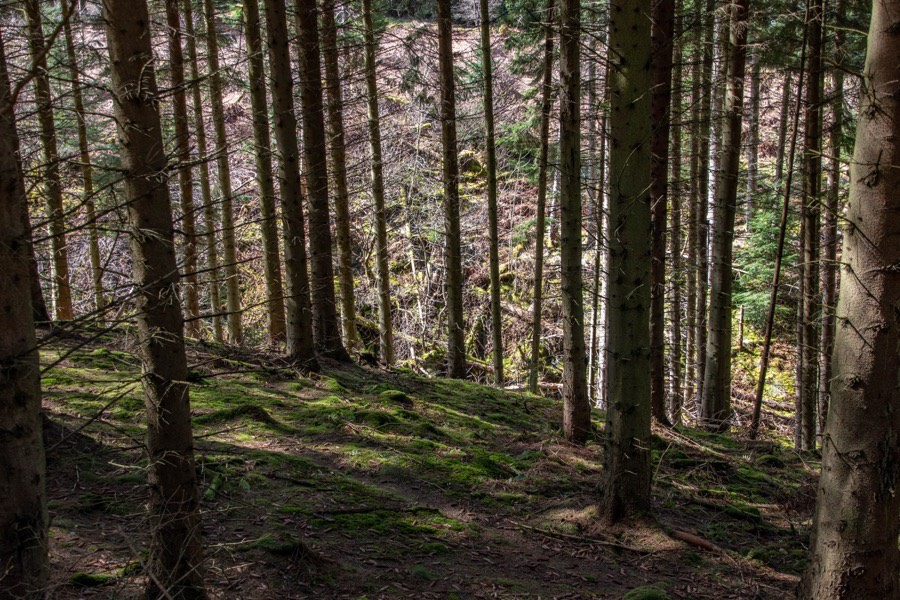 After some more climbing and a few more glimpses of the ruins through the trees we emerged from the forest to find Elibank Castle right next to the track.

A stile over a wooden fence gives access to the walled plot on which it sits, the long side of the castle running parallel to the fence. Slit windows barely above ground level hinted at a basement storey under the main ruins.

Moving around the south-east end of the castle revealed another hint of a basement level, with a blocked-up arch visible in the foreground with the main tower rising largely intact to second floor level beyond it to the north.

The tower may represent the oldest part of the castle, probably built by the Liddell family. The first floor level is vaulted and was entered via a doorway in the south-east wall although this is now closed off with a gate for safety reasons. The doorway probably connected the tower to a main hall in the rest of the block, now fallen. To the left of the doorway are the remains of a fireplace.

Originally a small square wing projected from the south end of the main block to form an L-plan building and apart from the main tower the south-east gable of this wing is the only part of the castle standing to a height greater than the first storey.

Rubble from the upper storeys of the main block has now fallen into the re-entrant angle, almost obscuring a low doorway which gives access to two vaulted chambers in the basement level.

The views from up here along the Tweed Valley are fantastic and shows what a good position the castle occupies.

After spending some time drinking in the classic Border scenery we made our way back down the forest track to the car and headed towards Peebles. Just before the Cardrona turn off we pulled into a layby next to the River Tweed for a traditional Scottish picnic (i.e. wearing waterproofs, in the rain). 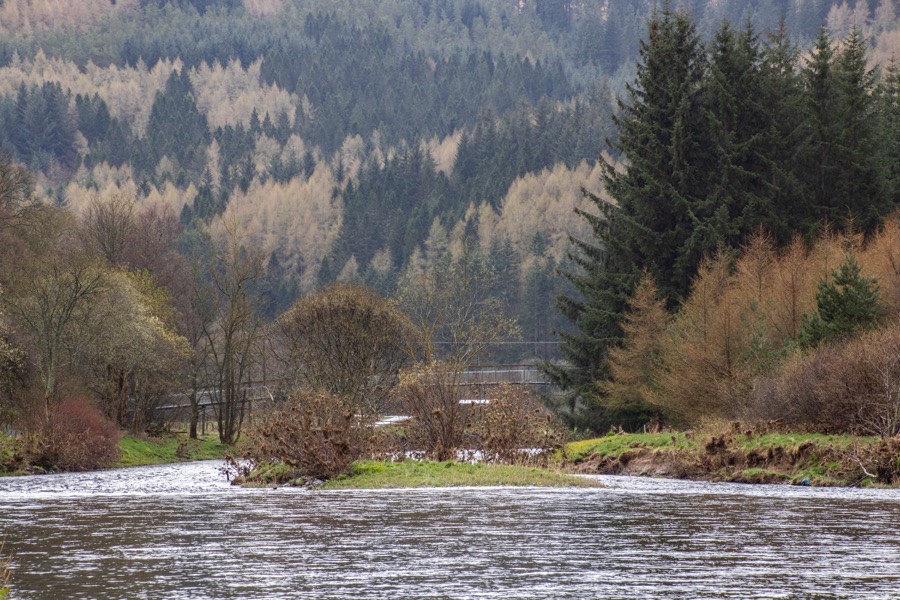 In Peebles we’d planned to go and have a look at the Cross Keys bastle but the rain was now quite heavy so we decided to save it for another day. However while driving through the town we randomly noticed a sign to the Cross Kirk so followed it.

The Cross Kirk was built between the 13th and 15th centuries. In 1241 a fine stone cross was found here on a site which may have been an early Christian place of importance. Along with the cross an urn was found, containing what some people believed were the cremated remains of St Nicholas. Alexander III sponsored the building of a church to house the cross and the shrine of the saint.

The original church was a simple rectangular building with a thick-walled vaulted vestry on the north side.

Later, in the 15th century, a community of Trinitarian friars established themselves here, building domestic quarters and cloisters to the north of the church. It was probably around this time that the tall west tower was added. This tower rises to a height of five storeys with a spiral staircase in one corner and numerous fireplaces and windows.

Following the Reformation it became a Protestant church but continued to serve as a place of pilgrimage. It remained as the local parish church until 1784 when it was superseded by a new church.

As the rain continued to fall we decided to call it a day and made our way back up to Edinburgh.